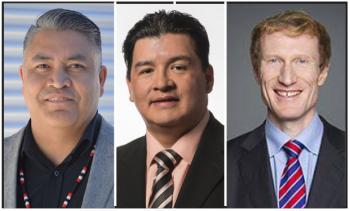 “It’s not going to be like a proposal or program funding. This is going to be quite different. We are suggesting that perhaps the best way is to use a Jordan’s Principle’s allocation, where there’s no real requirement for getting an okay, just go use the funding and we’ll deal with it later. Because, quite frankly, that’s really where we’re at.” — Regional Chief Terry Teegee, B.C.
By Shari Narine
Windspeaker.com Contributor

It is unclear exactly how $305 million promised today to Indigenous communities will roll out. It’s part of an economics package from the federal government to combat COVID-19 impacts.

Prime Minister Justin Trudeau described the dollars as a distinctions-based Indigenous Community Support Fund to address immediate needs in First Nations, Inuit, and Métis Nation communities. It was part of a much larger $27 billion initiative from the federal government in direct support to Canadian workers and businesses.

“He didn’t have more details about how the money would be rolled out. Just that it’s there and they’re trying to figure out what’s the best way,” Teegee said. “That’s why I’m recommending that we use this to our advantage, that we put recommendations to them so we can best roll out those resources and funding.”

Finance Minister Bill Morneau addressed the Indigenous component of the funding in a news conference. “We need to recognize that we don't know all the situations so far and that we need to prepare ourselves for those eventualities. That's what we're doing in the case of Indigenous peoples and we’re looking forward to working together rapidly to figure out the details.”

Teegee said it’s not surprising that Morneau knows little about the situation that faces Indigenous peoples living in the north or in remote areas, which constitutes about 80 to 85 per cent of the First Nations population. He says most ministers don’t have an understanding. That understanding lies more with the bureaucrats.

“(This) might offer an opportunity, that we as Indigenous peoples can put recommendations forward and say, ‘Hey this is the best way forward. If you do it this way, we can be better served by any of the services they’re utilizing for any non-First Nations communities.’ I think we can utilize it to our advantage. ‘We’re going to have to do this. This is the best way to do it’,” said Teegee.

Teegee is suggesting that Jordan’s Principle be employed since it sounds as if funds may be granted on a needs basis.

“It’s not going to be like a proposal or program funding. This is going to be quite different. We are suggesting that perhaps the best way is to use a Jordan’s Principle’s allocation, where there’s no real requirement for getting an okay, just go use the funding and we’ll deal with it later. Because, quite frankly, that’s really where we’re at. I think the whole country is behind in terms of trying to stave this off from getting into the communities, in flattening the curve as everybody is trying to do,” he said.

Through Jordan’s Principle, products, services and supports are provided to First Nations children as needed with the jurisdiction that provides the services initially covering the costs. The government department of first contact then seeks reimbursement from the other government or department after the child has received the service.

Teegee pointed out that BC, with 204 First Nations communities, is second only to Ontario for First Nations population so if the Indigenous Community Support Fund is allocated based on population, BC would get “a large portion.”

“That’s one of the questions we’ve asked, but haven’t got a clear indication,” he said.

However, Teegee said that even in BC there’s a difference in emergency preparedness with First Nations, as some put plans in place over the last one or two years in response to wildfires.

“That put those communities in the mindset of emergencies: ‘What do we need to do in event of an emergency.’ Some of them, by sheer experience, had to do it anyways, so some of them are utilizing their emergency plans,” he said.

Whether the $305 million allotted to Indigenous communities in response to COVID-19 will be enough, is hard to say, Teegee said. It all depends on how long extreme measures must be implemented.

Morneau said that the funding announced by the federal government March 18 was only the beginning.

"There will be a next phase where we might continue to need to support people ...There will be more to come," said Morneau.

In a news release, the Federation of Sovereign Indigenous Nations (FSIN) also addressed the lack of details in the funding program.

“Our First Nations need clarity when it comes to what funding is coming to our region and when it will begin to flow to our nations and we are running out of time to stay ahead of this pandemic,” said FSIN Chief Bobby Cameron.

The funding needs legislation and Royal Assent, which means Parliament must meet.

Morneau said the government has been working with the opposition parties to reconvene the House of Commons and pass the necessary legislation. Funding will probably not be available until April 1.