Fund will help BIPOC culinary students with their tuition costs 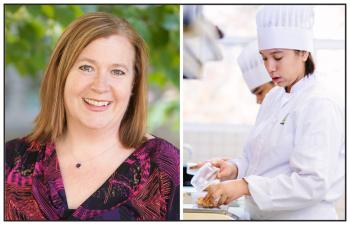 (left) Moira Gookstetter, executive director for the VCC Foundation at Vancouver Community College. (right) A photo of a student in the culinary arts program at VCC.

“Some of the non-academic criteria include a little bit about being able to overcome some of the barriers or challenges that they’ve encountered to pursue their education. And their ability to make a positive contribution in the classroom, the college and the community at large.” — Moira Gookstetter, Executive Director VCC Foundation at Vancouver Community College
By Crystal St.Pierre
Local Journalism Initiative Reporter
Windspeaker.com

Students of under-represented and equity-deserving communities will be given a Seat at the Table through a new funding initiative being launched this year at four post-secondary education facilities across Canada—Vancouver Community College (VCC), Humber College, Centennial College and the Institut de tourisme et d'hôtellerie du Québec.

The Canadian Seat at the Table Fund was developed to create opportunities for those students who aspire to build careers in the food industry, said Eric Huston, general manager for Mars Food Canada parent company Ben’s Original.

“Everybody deserves to feel welcome and heard and to have access to equitable opportunities for education and career advancement. The Seat at the Table Fund aims to create opportunities for Indigenous, Black and persons of colour pursuing careers in the food industry.”

The funding for the Seat at the Table Fund comes from the Ben’s Original as part of its commitment to be a purpose-led brand that takes action, explained Huston.

Over the next two years, a total of 40 scholarships in the amount of $5,000 each will be given to students in various programs across Canada.

Moira Gookstetter, executive director for the VCC Foundation at Vancouver Community College, explained how the funding will aid in breaking down barriers for students who would otherwise have a difficult time paying tuition.

“At VCC especially, we have the lowest tuition rates for post-secondary in British Colombia, and to be able to partner with Mars Canada is absolutely phenomenal,” Gookstetter said. “It essentially will give a student tuition for that first program. The cost of that professional cook one (class) is just about $6,000 so it makes a huge impact to them and it really opens the door where a financial door would be a barrier. It really eliminates that financial challenge to creating that learning opportunity.”

VCC is best known for its culinary program as many graduates moving on to run their own restaurants or being top chefs in their area.

“We are very well known for the culinary program across Canada,” said Gookstetter. “We actually have the largest culinary program in western Canada. Many of our graduates move on to complete their Red Seal certification and some of them are actually award-winning chefs that you may see on television or award-winning in their communities for the restaurants that they are chefing and participating at.”

Another area that VCC is well known for is it work within the surrounding Indigenous communities.

“We are an open access institution, and by nature of where we are located, in Vancouver here, we work very closely with the three First Nation bands—Musqueam, Tsleil-Waututh and Squamish nations, and we have a good enrollment in our culinary programs from our Indigenous community,” Gookstetter said, adding that the work they do within these communities includes teaching high school students proper culinary practices.

Over this past year, VCC has also partnered with the Heiltsuk Nation on the west coast of British Columbia in an exchange of education agreement.

“We’ve developed a culinary arts course where we have gone in and trained their community members to work in the restaurant there and in exchange for that there has been a cultural exchange of learning different foods, harvesting techniques, and looking at some other traditional food preparation which we then have brought back into our program,” said Gookstetter.

“It’s a way of our culture here at the college. It’s about building community and reaching out to all community. Whether a community is coming to us or if we are going into a community, we are a very inclusive college and if we talk about reconciliation and that, it’s just part of what we do every day.”

Gookstetter said Seat at the Table scholarship recipients at VCC will have to be enrolled or accepted into the culinary arts or the baking and pastry program. They also have to have a demonstrated passion for the industry with a preference given to someone who is in good academic standing and is showing leadership potential.

“Some of the non-academic criteria include a little bit about being able to overcome some of the barriers or challenges that they’ve encountered to pursue their education,” said Gookstetter. “And their ability to make a positive contribution in the classroom, the college and the community at large.” Preference will also be given to students who demonstrates financial need.