Free, Prior and Informed Consent Conference to become a trail marker, chiefs hope 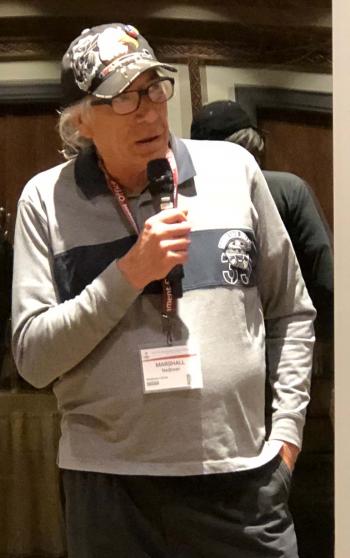 “We have to keep pushing. If we don’t push, nothing will be done.” —Marshall Nadjiwon
By Deb Steel

Marshall Nadjiwon got straight to the point about the importance of what was bringing people together last night. He is a carver and an Elder, and follows the Anishinaabe ways of knowing and being.

He was asked to provide a welcome to participants of the Free, Prior and Informed Consent Conference hosted by the Saugeen Ojibway Nation (SON) and its environment office.

To Nadjiwon, the environment is the most important thing.

The air, the earth and water, “our people will never survive without it.”

“Our animals, our people, the trees, the plant life, all these things are very important, because these are our medicines. These medicines get us a long way in life,” Nadjiwon explained.

“I know that our medicines work, because they worked on me.”

“We have to keep pushing. If we don’t push, nothing will be done.”

The conference comes at a time when SON, the Chippewas of Saugeen First Nations and the Chippewas of Nawash Unceded First Nation, have had some success with their efforts to improve consultations with the Crown and proponents that would develop in their territories, from the nuclear industry and wind farms to a quarry industry.

But free, prior and informed consent is their “ultimate goal of consultation”, and the hope is that the conference becomes “a trail marker” in the quest for reconciliation. That’s the message from chiefs Lester Anoqout of Saugeen and Chief Gregory Nadjiwon of Nawash.

Emcee Chris Pheasant introduced April Root-Thompson. She was carrying the load of conference organizer with the SON Environment Office.

Root-Thompson welcomed the participants saying she hoped they enjoyed the next few days, learned a lot and met new people.

Hayden King of the new Yellowhead Institute is also scheduled to speak. The institute recently released a detailed analysis of the framework, concluding it didn’t meet the smell test.

Jennifer Preston is the Indigenous Rights coordinator with the Canadian Friends Service Committee (the justice arm of the Quakers). She participated in the UN Working Groups that developed the United Nations Declaration on the Rights of Indigenous Peoples, and is now working on UNDRIP’s implementation.

The big next step on that front is getting the Romeo Sagnash private members bill C-262 through the Senate. It sits at second reading in the Red Chamber, with Senator Murray Sinclair as its champion. Movement on that is expected within the coming weeks, Windspeaker.com was told.

Among the other speakers are Vernon Roote a knowledge keeper, Randall Kahgee, a former Saugeen chief, and an Indigenous rights lawyer, and members of the Saugeen Ojibway Nation Environment Office among others.

The conference begins in earnest this morning at Blue Mountain Inn near Collingwood, and runs through Friday.