Fraction of a millimetre of good in MMIWG federal action plan, but Indigenous women entitled to more, says advocate 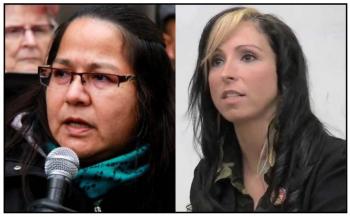 Critics of the federal national action plan in response to the 231 recommendations of the National Inquiry on Missing and Murdered Indigenous Women and Girls, delivered two years ago, say its lack of concrete action and implementation target dates fall on the shoulders of the federal and provincial governments and not on the shoulders of the hand-picked women’s groups who were consulted.

“I strongly suspect they haven’t listened to the groups that did participate very fully on that issue because these groups that were part of the process have been advocating for a long time about violence prevention and we simply don’t see it (in the plan),” said Dr. Pamela Palmater, head of the Centre for Indigenous Governance at Ryerson University.

The plan, meant to fight against violence against Indigenous women and girls and gender-diverse people, and the accompanying Federal Pathway, which outlined federal commitments, were presented virtually on June 3. That launch was quickly followed by criticism from a panel of women representing groups that were not consulted in developing the action plan.

Kukpi7 Judy Wilson, secretary-treasurer of the Union of British Columbia Indian Chiefs, charges that the process was not inclusive but instead bureaucratic. She pointed to a Vancouver coalition group and the Highway of Tears organization that were excluded from the process, despite direct asks by Assembly of First Nations BC Regional Chief Terry Teegee of Crown-Indigenous Relations Minister Carolyn Bennett.

“We‘re looking from the outside in and hoping that a plan will be meaningful and substantive,” she said.

The plan has been criticized for its reactive and not proactive priority actions; its lack of specific funding measures; its lack of inclusion of an expedited process to register women, children and grandchildren as Status Indian, which would allow them to have a say in band decisions and access programs; and a lack of focus on women and girls with disabilities who are more vulnerable as targets of violence.

The plan is also being called “fragmented” as it relies upon provinces and territories, along with Indigenous governments and organizations, to create separate plans.

There is a lack of coordinated efforts, said Shelagh Day, chair of the Human Rights Committee of the Feminist Alliance for International Action. She was speaking to the need to address basic income, housing and even policing.

“Those things have to be talked about at intergovernmental tables; all levels of government are involved. The same thing, I would say, with policing. We can’t have jurisdictional differences about how policing is done in this country for Indigenous women and communities. There’s just a huge need for coordination,” said Day,

Palmater also expressed concern that the plan appeared to be more of a process for getting funding for programs and services than a plan to “end genocide.”

“It’s not how many tables or meetings or initiatives that you have; how many funding programs that you can apply for. It’s the women and children on the ground,” she said.

The plan is a good starting point, said Dawn Lavell-Harvard, president of the Ontario Native Women’s Association. She said ONWA, which has nearly 50 years of experience with the issues, was excluded because of the federal government’s decision to work on a nation-to-nation basis, which resulted in the silencing of Indigenous women who were not connected to a First Nation, Métis Nation or Inuit land claim organization.

“This aspires to be a national action plan but if we were ready to roll up our sleeves and include those women organizations that are doing the work at the grassroot levels, have their voices, we can take this as a beginning start point and work with this, work at the community level and actually start to make the changes that we need,” said Lavell-Harvard.

Yesterday Marion Buller, chair of the MMIWG national inquiry, added her voice to the criticism, saying that in the two years since her final report was tabled, Indigenous women and girls and gender-diverse people have continued to go missing.  She also called out the federal government for not taking immediate actions where they could have.

“I don’t have much faith in government,” Buller said.

“We will move now onto the implementation plan that will include the investments, timelines and accountability framework,” said Bennett.

“This evergreen document will have to have the ability to be regularly updated based on results, that we measure, adapt, measure, adapt. Both today’s Federal Pathway and the national action plan really will be accountable to all of the families and survivors coast to coast to coast.”