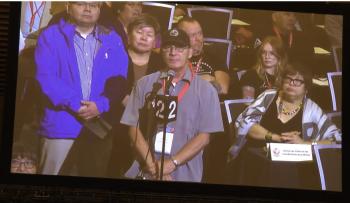 “We need to put all that past behind us and move forward in a good way.”
—Toquaht First Nation proxy Judith Sayers, president of the Nuu-chah-nulth Tribal Council
By Shari Narine
Local Journalism Initiative Reporter
Windspeaker.com

Chiefs-in-assembly today voted in favour of a forensic audit to be undertaken of at least the past 10 years of “financial activity of the (Assembly of First Nations), with particular attention to recent AFN salary payouts and contracts.”

The second emergency resolution to be brought to the floor in three days at the AFN’s annual general assembly in Vancouver passed, this one receiving support from 75 per cent of the chiefs.

The first emergency resolution that called for the suspension of National Chief RoseAnne Archibald was defeated. Archibald had been calling for the forensic audit.

Investigation and Audit of AFN’s Financial and Management Practices resolution directs the Chiefs Committee on Charter Renewal to make recommendations regarding the scope and nature of a forensic audit, which would not be “limited in time to anything less than 10 years.”

The committee is directed to hire an independent auditor who will carry out the third-party forensic audit. The forensic auditor will also “conduct a digital investigation into alleged breaches of communication at the AFN.”

Chiefs went ahead with approving the forensic audit even after Deloitte Canada offered a clean record for the National Indian Brotherhood, the corporation of AFN.

She said “no restrictions have been placed on the scope of our audit” and her auditing firm had been “given full access to the accounting records and supporting documentation and other information requested.”

But chiefs were left wanting more information when Ethier didn’t respond to direct questions; when they were told by both co-chairs that their time was limited; and when their concerns were initially addressed by the national chief alone.

Leading up to the assembly, Archibald had been pushing for a forensic audit, which was to include the past eight years.

Chief of the Mohawks of Bay of Quinte R. Don Maracle pressed Ethier about whether any “red flags” had been raised prior to the audit. She did not answer his question.

Proxy Regena Crowchild of Tsuut’ina Nation said that was important information to know because charges of corruption had taken control of the three-day AGA so chiefs should know whether or not mismanagement was a valid concern.

Archibald responded by saying she had sent confidential emails to chiefs across Canada outlining information of corruption.

It became clear from comments that followed from other chiefs that Archibald’s email included a list of chiefs, councillors and others alleged to have received questionable contracts or payouts.

“I continue to be very clear about the fact that from our perspective, and the information that was shared, I did not see any concerns with respect to the information I reviewed as part of the management committee and as chair,” said Adamek.

She also stated that the national chief did not have to “sign off” on the audit as that was the responsibility of the chair of the management committee.

Kebaowek Chief Lance Haymond, who seconded the resolution, said it was important for chiefs to know what was happening in their organization.

“It’s not only chiefs who want to understand what’s going on. Our grassroots people want those answers as well,” said Haymond, who added he had been contacted via Twitter and other social media by his community members supporting his position.

Some chiefs expressed concerns about the timeframe of the audit.

Chief Justin Kane of the Ts'kw'aylaxw First Nation questioned the ability to recover any losses that may be identified from wrongdoings 10 years ago.

Chief David Poitras of Salt River First Nation said an audit of 10 years would run into the millions of dollars to be undertaken. He suggested focusing on recent salaries and contracts and going back only one or two years.

Concerns were also expressed about the damage such an audit could cause.

“This could bring an end to this whole AFN if we’re not careful on how we proceed with business,” said a former BCAFN board member, wondering if funders would reconsider supporting the organization.

But other chiefs held that the air needed to be cleared and only a forensic audit would do that.

Okanagan Indian Band Chief Byron Lewis said allegations of corruption, gender bias and nepotism had to be made based on proof and “this is the process how you establish proof.”

Toquaht First Nation proxy Judith Sayer, president of the Nuu-chah-nulth Tribal Council, supported the motion, saying it was an opportunity “to address all these issues. We need to put all that past behind us and move forward in a good way.”

But for one chief, spending almost two-and-a-half days dealing with the inner turmoil of the AFN was too much.

“This is not leadership. This is not what our people expect of us as leaders,” said Serpent River First Nation Chief Brent Bissaillion.

“I am expressing deep dissatisfaction with the national and regional leadership. We would rather be fighting the government than fighting our brother and sister nations. Our youth has called out this assembly for inaction and the last few days have been marred in drama and ego.”

Bissaillion said Serpent River was suspending its participation in the assembly and would chart its own path forward.

“To my community and other communities, I want to apologize for this assembly. To our Elders, our youth and the next generation, we have failed you. We must do better and we can do better…We can’t waste anymore time on this. Our people need us and we are going home.”

The emergency resolution also calls for the national chief, her office, and the executive committee to cooperate with an independent investigation into the human rights allegations from staff. All those involved have been directed to “refrain from making any public comments in the media” until the results of the investigation have been reported to the chiefs-in-assembly.