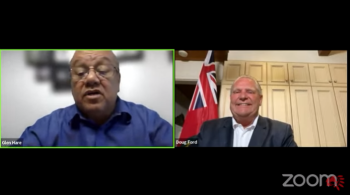 “We want to stress … there is still a requirement to truly get serious about the discussions and have an opportunity for us to truly settle this long-standing grievance with revenue sharing…” — Ogimaa Chief Duke Peltier of Wiikwemkoong Unceded Territory
By Shari Narine
Local Journalism Initiative Reporter
Windspeaker.com

It’s all about relationships, Doug Ford told a handful of chiefs this morning as he participated in a virtual session hosted by the Chiefs of Ontario.

“My relationship with the Indigenous leaders like yourselves and the communities you represent is incredibly, very important to me,” said Ford, leader of the governing Progressive Conservatives.

“As premier I’ve always strived to do my very, very best to work in true partnership with Indigenous and First Nations communities, because this kind of partnership has never been more important.”

Ford spent his time with the chiefs making sweeping promises as he touted economic prosperity, equity partnerships, procurement opportunities, and quick follow-up on a number of issues, should he be re-elected.

Ontario goes to the polls on June 2.

Ford even used the chance to push his government’s $4.2 billion plan for broadband development when his conversation with Fort William First Nation Chief Peter Collins was cut off prematurely.

Collins asked Ford to have a policy that “writes-in” First Nations’ participation in any economic development that was happening in their territories. He said policies had to include set-asides for First Nations to benefit from spin-off opportunities and contracts.

Ogimaa Chief Duke Peltier of Wiikwemkoong Unceded Territory pitched the need for government procurement of the N95 masks being manufactured at a plant on Manitoulin Island.

Chief Gerry Duquette asked Ford to revisit some of the projects the Dokis First Nation had been involved in “but we’re cut-off.” He said they wanted them to be reconsidered as they were also in collaboration with different towns in the area and would allow them “to drive this economic venture together.”

Chief Jason Henry expressed concern with the “absolute void of Indigenous inclusion” when it came to the Stellantis EV battery plant that was announced at $4.9 billion for Windsor in March.

“Being the treaty holders locally here, we would have loved to have been and still love to be part of that, not just on procurement…We need to be equity owners in these projects to help our First Nations reach not just economic sustainability but economic sovereignty,” said Henry.

“Equity…is critical,” said Ford. “As long as we all work together then we’re going to be prosper(ous).”

He committed to having discussions with South Korean battery manufacturer LG Energy Solution and European automaker Stellantis “to see where we can support your community and have a stake in it.”

He also committed to doing “the right thing” when it came to procuring product from First Nations.

Peltier questioned Ford on the Robinson-Huron Treaty annuity negotiations, which began again in April with the federal and Ontario governments. The 21 First Nations that are part of the treaty are arguing that $4 per-person annuity established in 1874 needs to be renegotiated.

“We want to stress … there is still a requirement to truly get serious about the discussions and have an opportunity for us to truly settle this long-standing grievance with revenue sharing …which would also lead toward more equity ownership into other projects,” said Peltier. “We’re continuing to look for commitment on that from yourself.”

“I think we’re very close without going into details,” said Ford, who slammed successive Ontario governments for ignoring the issue.

Ford also promised to “sort out” issues raised by Chief Dave Mowat on soil containing junk being dumped on Alderville First Nation and by Couchiching First Nation Chief Brian Perrault about the Métis Nation of Ontario wanting to claim “treaty rights without having a treaty.”

Perrault and Ontario Regional Chief Glen Hare both applauded Ford for his inclusion of First Nation representation when decisions were being made about combatting the coronavirus pandemic.

“For the last two years during the pandemic my thoughts about the PC government has changed a little bit because with the (Mike) Harris government we didn’t feel that the PCs cared anything about First Nations. But I’ve seen the changes over the last couple of years and I appreciate that,” said Perrault.

“Don’t put me in the square box with conservative groups. I’m Doug Ford, that’s it. I’m Doug. So if you need me, just call me and I’ll help you out,” said Ford.

To further emphasize his point, Ford announced his cell phone number and invited all the chiefs and their families to his home for a barbecue.

He also committed to having Greg Rickford returned as Indigenous Affairs minister should the PCs continue as government and he strongly recommended that First Nations elect PCs to represent them at Queen’s Park, the seat of the Ontario government.

“I’m just asking for your support and I won’t let you down. You’ll always be able to pick up the phone, call me, drop by and continue building a very strong relationship that will bring prosperity. It brings roads. It brings health care. It brings diesel. It brings everything. There’s always a way, always, to make sure we work things out,” said Ford.

In March, the COO set out a 34-page “call to action” outlining provincial priorities for the election. The first step to meeting those priorities, says the document, is to “build a renewed relationship consistent with First Nations sovereignty and the principle of Free, Prior, and Informed Consent.”