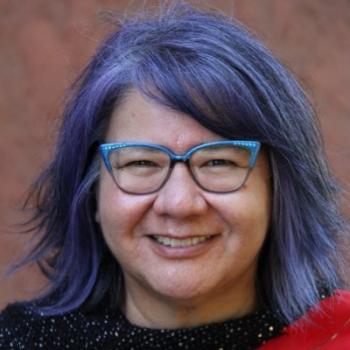 “The AFN has made herstory today. The chiefs have made history and herstory. It’s time for change on so many levels.” —National Chief RoseAnne Archibald
By Shari Narine
Local Journalism Initiative Reporter
Windspeaker.com

RoseAnne Archibald has made “herstory” today as she became the first woman to be elected as national chief for the Assembly of First Nations.

Shortly after the results of the fifth ballot were announced Bellerose conceded the election to Archibald. He wished her the best, saying, “It’ll be a challenging role, but I’m sure you’ll do well.”

Archibald, surrounded by her family and community, shed tears as she finished swearing the oath of office for her new position after being blanketed and smudged, with two Honour Songs sung to transfer responsibility from outgoing national chief Perry Bellegarde to Archibald.

“The AFN has made herstory today. The chiefs have made history and herstory. It’s time for change on so many levels,” said Archibald in her first address as national chief.

“I am so honoured to be a part of this difference and today to make a difference for this organization moving forward. Voices are being heard that were never heard before and we will not be silenced. Goodness and love will prevail.”

Archibald committed to serving “with humility” and making room for women, two-spirited, and LGBTQIA+. She also said she would be “hitting the road soon” to meet with leaders, to walk beside them and support them.

Archibald gave special acknowledgement to the women who had “punched that (glass) ceiling before me and made it crack.”

One of those women led Archibald in her oath. Delia Opekokew became the first woman to run for national chief in 1994. In this election, three women challenged for the position.

Archibald also addressed the genocide that Indigenous people have faced and she issued a warning.

“With the recent discovery and recovery of our little ones across this country we are all awake; we have all been awakened. And what people need to understand and what people are coming to terms with is how settler Canadians have benefited from these colonial practises and how we as Indigenous people have been the target of genocide. While there is a new level of consciousness we are going to stare this straight in the face and kick colonial polices to the curb.”

She also committed to ensuring the 94 Calls to Action from the Truth and Reconciliation Commission, which examine the legacy of Indian residential schools, are implemented.

Archibald recognized the six people who ran for national chief. Along with Bellerose, the other names on the ballot were Jodi Calahoo-Stonehouse, Lee Crowchild, Alvin Fiddler, Kevin Hart and Cathy Martin. Calling them her “competitive siblings,” she said she hoped they could continue to work together.

“The work really begins today and I am so looking forward to the path ahead. I am filled with hope. I know that our allies are listening to us and they are there to help us. And we will heal this country together. We will walk forward together,” said Archibald.