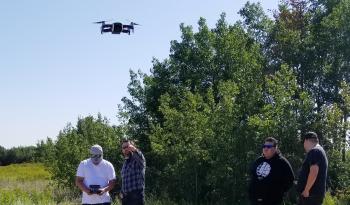 Ermineskin students will be demonstrating their skills as advanced drone pilots on Aug. 27 at the Panee Grounds.
By Shari Narine
Windspeaker.com Contributor

Perry Morin is bursting with pride when he talks about his latest achievement.

The 42-year-old who works security at the Ermineskin band office recently passed both his basic and advanced tests to become a drone pilot. The tests are Transport Canada administered and certified.

"It was about medium difficulty, but I stuck with it. It’s a learning experience. It’s always good to learn things, even if it’s hard or not," said Morin. "I accomplished a lot. I felt really good."

Norquest facilitated and covered funding of the course, while PSC developed “the top of the end course” and provided the drones.

Eleven students from Maskwacis participated in the program. All passed the basic test with the first writing and nine passed the advanced testing the first time.

Thirty-two per cent of the general population pass the advanced test after the third attempt, said Palka, adding that a passing mark for an advanced pilot is 80 per cent.

It’s the first time PSC has offered the drone training on any First Nation. PSC is a not-for-profit organization started about one-and-a-half years ago and consisting of representatives in the security industry.

PSC had been involved with Norquest College in Edmonton offering security guard training to Indigenous people, but about one-third were not passing the course and the steady attendance rate was low.

“We had jobs available for students, but weren’t placing students. This concerned me and I thought to myself there must be something else at play here,” said Palka.

Palka visited a number of Indigenous communities and found that members weren’t interested in leaving their First Nation for low-paying security jobs. In those discussions, he found “they were quite excited about drones.”

Morin is a self-proclaimed tech geek and says he was drawn to drone technology because that's where the future is.

After community engagements determined there were more people like Morin, Palka did job searches. He found that not only was there a growing need for drone pilots and at a decent starting wage, but the Alberta government was increasingly putting out requests for proposals for people in rural communities who could implement a fire watch, which would include cameras or imaging on drones.

“Right away it hit me. We have 48 First Nations in Alberta, many in remote locations. If we train X-number of people in communities, how can they use the training for work in the communities and work outside the community?” said Palka.

Being able to pilot a drone offers a wide range of work: surveying or mapping of traditional land; surveying an accident scene; inspections of properties, pipelines and telecommunication towers; recording powwows and other events; monitoring wildlife and environment; and crop inspection. Drones can be fitted with cameras, thermal imaging or small crop sprayers.

Palka also points to the use of drones for search and rescue efforts.

“If you think of these two boys (Bryer Schmegelsky and Kam McLeod) who were up north (near Gillam) Manitoba, instead of putting all those resources out there, bringing the RCMP (and Royal Canadian Air Forces), there are two reserves up there. If we had guys trained out there, they could have been up with a drone checking the area out,” he said.

Those that received RPAS training in Ermineskin are employed in the fire department, security, band administration or disaster services.  Being a drone pilot would be a part-time occupation.

One of the member-companies in PSC would contract out its drones for such work, says Palka, so the drones would be insured.

Fire departments or band offices could also purchase drones for their members to use on a contract basis, he says.

The three-week drone pilot training is in the early stages right now on the Enoch Cree Nation with eight students coming from Enoch, Samson Cree Nation and O’Chiese First Nation.

“We’re committed to it as only Indigenous people, because, simply put, the footprint of where they are and where they’re located there’s a lot of services they can offer (as drone pilots),” said Palka.

Ermineskin students will be demonstrating their skills as advanced drone pilots on Aug. 27 at the Panee Grounds.