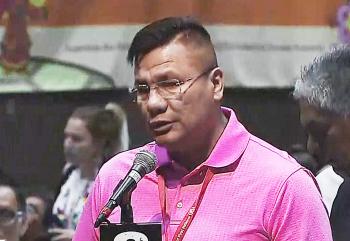 “We have to move at the speed of business, and no disrespect to the AFN, the fact being there has been a working table there, but they can’t answer a lot of the questions we’ve had for Opaskwayak.” —Chief Christian Sinclair
By Shari Narine
Windspeaker.com Contributor

Despite believing the Assembly of First Nations’ involvement in the cannabis industry is coming more than two years too late, Opaskwayak Cree Nation Chief Christian Sinclair stepped in to second a resolution at the July AFN’s annual general assembly that creates a Chiefs Committee on Cannabis.

And he will be speaking at the upcoming AFN Cannabis Summit in Vancouver Sept. 4 and 5.

Sinclair joined Thessalon First Nation Chief Edward Boulrice in introducing a draft resolution which initially proposed creating a First Nations cannabis council that would consist of elected officials working with industry experts and institutions that would inform the federal government of First Nations approaches to the cannabis industry.

“We have to move at the speed of business, and no disrespect to the AFN, the fact being there has been a working table there, but they can’t answer a lot of the questions we’ve had for Opaskwayak,” said Sinclair.

“So we have been figuring it out and going through that minefield ourselves, and fortunately very successfully for ourselves.”

Opaskwayak Cree Nation in northern Manitoba is a leader in the cannabis industry, having created a partnership with Trichome Financial Corporation and is now involved in sales internationally.

Right across the country, First Nations are already involved in the cannabis industry, establishing their own legal frameworks. Some communities have opened dispensaries, others have formed partnerships or invested in cannabis companies, others are growing and cultivating cannabis, and others are processing cannabis.

However, the draft resolution to create a First Nations cannabis council was deemed out of order as the AFN charter only allows for three councils: youth, elders and women.

AFN legal counsel Stuart Wuttke also raised concerns about accountability for a council that would consist of both elected and non-elected members.

Wanting to keep the momentum going on an important economic opportunity for First Nations, Boulrice and Sinclair agreed to the creation of the Chiefs Committee on Cannabis instead. The committee would be chaired by B.C. Regional Chief Terry Teegee, who holds the economic portfolio for the AFN. The resolution was passed by consensus.

“It’s that terms of reference, where we bring in the experts and that oversight and the technical people that would advise the chiefs that are part of this working group, that’s the really important part … That would really support what we’re trying to do here,” said Teegee, who said cannabis became part of his portfolio this past January.

The committee would also receive health and spiritual guidance.

Jurisdiction, taxation and regulations – which will be discussed at the upcoming Cannabis Summit – were heavily emphasized.

Pheasant Rump Nakota Chief Ira McArthur said his Saskatchewan First Nation celebrated July 1 by opening a cannabis dispensary on reserve. He said First Nations had to understand how the cannabis industry factored into their treaty, inherent and Aboriginal rights and jurisdiction over their lands.  First Nations also had to be respectful of each other’s circumstances.

“If there are First Nations that potentially don’t want to get into cannabis… I would encourage them to still develop regulations for their community around use and consumption and possession of cannabis, because this is an area that’s not currently occupied by either the federal or provincial governments and we have to take up that space, we have to occupy that jurisdiction or else we’re going to lose it,” said McArthur.

“It’s going to be negotiated away or it’s going to be lost through court or whatever. We need to be able to establish ourselves and develop these laws as individual First Nations.”

The AFN was admonished for not lobbying the government to amend the Criminal Code and providing legal certainty for First Nations.

“I can tell you, before Bill C-45 was passed, we asked Bill Blair, who was in charge of the federal file for the Liberal government,  to amend the Criminal Code so that First Nations’ licensing, authority and jurisdiction to pass regulation would be recognized,” said Chief R. Don Maracle of the Mohawks of the Bay of Quinte.

“That didn’t happen. There didn’t seem to be any call from the AFN to do that so we were kind of the voice crying in the wilderness.”

Maracle said his community, which was drafting its own regulations, would not impose federal or provincial taxes on the cannabis industry.

“I recognize other First Nations have taxing bylaws and support collecting taxes and that’s their prerogative to do that, but that all comes under jurisdiction and regulation and licensing in their communities. So each community is going to be different,” he said.

Community involvement in the cannabis industry was also a focus.

Chief Greg Nadjiwon of Chippewas of Nawash Unceded First Nation said a cannabis cultivation operation began in his community without discussion and has created a “big firestorm”.

Chief Denise Stonefish of the Delaware First Nation said community consultation through a referendum in June has led to direction to proceed with both medical and recreational cannabis.

“I’m here to say that whether this resolution passes or not passes, I have received direction from my community and we are moving ahead,” she said.

Chiefs and First Nations’ technicians and organizations involved with the cannabis industry are expected to attend the AFN Cannabis Summit, along with federal, provincial and territorial government representatives and non-governmental organizations, industry and academia.

The summit is being touted as an opportunity to discuss “the implications of the legalization of cannabis.”