First Nations’ economic advancements pushed down by overt and systemic racism 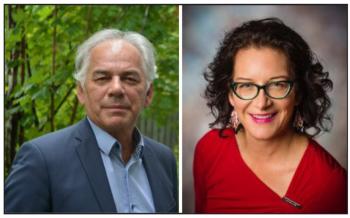 “We should start by addressing that there is systemic racism across the province and the public sector, across the nation’s banking industry, in the insurance industry and these are all pivotal or necessary pieces for economic development.” — Mi’gmaq entrepreneur Victoria Labillois
By Shari Narine
Local Journalism Initiative Reporter
Windspeaker.com

Racism, discrimination, sexism and stereotyping all contribute to holding back First Nation entrepreneurs as they strive to make advances through economic development.

“It’s like racism went underground for a number of years, but over the past more recent history, social license is opened up because we see it on TV, and we hear and see very hurtful things happening …. It’s real and it exists, not just out in the public but across institutions that are necessary for our (economic) development,” said Mi’gmaq entrepreneur Victoria Labillois from Listuguj, Que.

Labillois, who was the most vocal on the subject, was one of four members on the panel, which included both Indigenous and non-Indigenous members.

Labillois began Wejipeg Excavation in 2011 in response to new work being created because of the wind industry. As a new industry, it was one that First Nations had not been kept out of due to legislative policy, such as in commercial fishing and forestry.

“So when a new industry came along, that’s where the opportunity was for the creation of new companies and bringing our skilled and trained workforce to work alongside the francophone population that has been benefitting from these opportunities all along,” she said.

It was her chance to show how a Mi’gmaq labour force, one that was being overlooked for employment opportunities, could deliver. It was an opportunity, said Labillois, to fight against “inherent biases (and) look at the stereotypes of misconceptions that exist about our people.”

As an entrepreneur and a woman, Labillois is well aware of the challenges facing Indigenous people, including being taken seriously as a company that can deliver skill and competency and has the capacity to compete alongside “some of the bigger companies that are operating across our traditional territory.”

Also at issue, she says, is being able to access capital, getting start-up dollars from financial institutions, and having financial literacy skills.

“We should start by addressing that there is systemic racism across the province and the public sector, across the nation’s banking industry, in the insurance industry and these are all pivotal or necessary pieces for economic development,” said Labillois.

Mark Shadeed is also aware of the barriers that Indigenous entrepreneurs face, but he knows them from the other side. Shadeed is director of Aboriginal Banking for BMO in Laval, and also a non-Indigenous director for the Canadian Council for Aboriginal Business (CCAB)

“Economic reconciliation is only achieved when Indigenous communities start managing wealth and not poverty,” he said, but admits the challenges are numerous.

Among those challenges he identifies are an “outdated” Indian Act, which makes home ownership on reserve impossible. Without that ownership, potential entrepreneurs have little to offer in collateral to get financing from a financial institution and that “puts them at serious disadvantage.”

To this end, said Shadeed, BMO is building on steps it began to take in 1992 when it created an Indigenous banking unit. BMO was the first bank to open on-reserve branches. BMO has developed internal lending directives that don’t take collateral on assets on reserve. As well, BMO has set “aggressive goals” to increase Indigenous hiring and Indigenous people in management. Last year, BMO established an Indigenous advisory council to monitor the bank’s progress when it comes to Indigenous relations.

Shadeed also pointed out that banks were once funding loans to Indigenous communities at five- or 10-year terms. Now, loans may be amortized as high as 30 years.

“Many are finally becoming aware. Everybody’s waking up to the history, to social injustice and to the reality of stark social economic gaps not only for Indigenous people but for people of colour, women and LGBT,” said Shadeed.

Shadeed believes something as simple as corporate Canada including Indigenous businesses in their supply chain could make a significant difference for a First Nations community. He points out that CCAB is calling on the federal government to commit five per cent of their business to Indigenous companies.

AFNQL Regional Chief Ghislain Picard, who moderated the panel, noted that lockdown measures that have been in place to some degree since March 2020 as a means to control the coronavirus pandemic were starting to be eased.

“Quebec has moved forward on trying to provide the proper energy for an economic reset and we’ve said First Nations, Inuit or Indigenous people should not be outside that commitment,” said Picard.

Earlier in the month, a French panel was hosted by AFNQL on the same topic. Picard said the suggestion was made to host an economic summit, which would provide an opportunity to discuss the importance of including Indigenous communities in the economy rather than “being on the outside looking in. I think it’s very key.”

“If we’re going to have an economic summit that will result in tangible progress for us, we should attach some teeth to it,” said Labillois. “Time is a commodity and especially thinking as an entrepreneur, we don’t have a lot of time.”

An opportunity to bring Indigenous and non-Indigenous partners together was also favoured by Shadeed, but he said whatever was decided upon “it can’t be a best effort scenario. It has to be mandated.”

Rounding out the panel were Grand Chief Ted Moses, business leader and president of the Secretariat to the Cree Nation Abitibi-Témiscamingue Economic Alliance, and Isabelle Foisy, president and CEO of QuébecInnove.

Roundtables are a part of the AFNQL’s plan against racism and discrimination, which was launched last September. The plan was unveiled after a survey of 1,000 people. It assessed Quebecers' knowledge and perceptions of First Nations in Quebec and indicated that 92 per cent of non-Indigenous Quebecers recognized that First Nations were subject to racism or discrimination in the province.

The first roundtable was held in November and consisted of mayors and chiefs. The next two roundtables, one in French and one in English, will deal with education and take place in March.