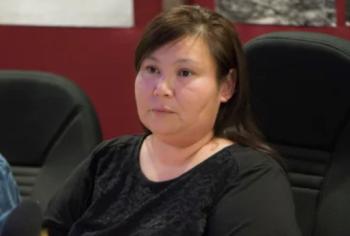 April Martel was acclaimed to the position of chief of K'atl'odeeche First Nation when challenger Elaine Auger was ruled ineligible to run due to residency requirements in the Nations custom election code.

Direction from an adjudicator for immediate steps to be taken by the K'atl'odeeche First Nation in the Northwest Territories to hold an election for chief is not being met.

On May 25, adjudicator Michael E. Hansen released his decision stating Elaine Auger should not have been disqualified to run as chief because of a two-year residency requirement in the Nation’s custom election code.

Auger appealed the election code requirement after the returning officer said she was ineligible to run although she had been living in K'atl'odeeche First Nation since July 2021. Because of the ineligibility ruling, incumbent Chief April Martel was acclaimed.

Such a residency requirement, asserted Hansen, was counter to Sect. 15 of the Charter of Rights and Freedoms, which states, in part, that “(e)very individual is equal before and under the law and has the right to the equal protection and equal benefit of the law without discrimination…”

“The result is that …the only realistic effective form of relief available to Ms. Auger is to declare the acclamation of the Chief in the November 2021 election void and null,” wrote Hansen.

However, said K'atl'odeeche Nation member Doug Cardinal, Martel is remaining “as if nothing is going on, just defying the order of the adjudicator…The adjudicator has passed his ruling on the case and that’s being just ignored.”

Cardinal, who testified at the public hearing, says Martel should be stepping down and Irene Graham, who got the most votes on council, should be serving as sub-chief.

Cardinal also points out that the general band meeting held on June 9 was supposed to be for swearing in the council that was elected last November. In that case, two new members were to join four incumbent members on council. But that didn’t happen.

“I say that all communities, this community, I keep telling them, ‘We cannot make up our rules that are applicable only for us’,” said Cardinal.

Auger agrees and says that is one of the reasons she decided to challenge Martel.

“The reason why I wanted to run was to have the ability to have transparency and run programs, because at the moment everything is not as it should be,” said Auger.

Both Auger and Cardinal believe that the best people should be able to run for the positions and how long they have lived in the community shouldn’t be relevant.

Cardinal points out that because of housing and employment issues, two-thirds of K'atl'odeeche Nation members live off-reserve.

“I’ve tried to run before for myself and was denied because I don’ t live on the reserve. In my mind, in today’s world, I look at the chief as to be equivalent to a CEO of a corporation,” said Cardinal.

Both Auger and Cardinal attended the general band meeting June 9. They both say what happened in the meeting hasn’t been reflected in the information posted on the band’s Facebook page.

“I know I had the support and I knew that people wanted change,” said Auger.

She said she left the meeting with the impression Martel would step down right away and an election for chief would be held.

However, that was not what was posted as the outcome of the June 9 meeting. Instead, the Notice to Members states a referendum to amend the K'atl'odeeche First Nation Custom Election Code will take place followed by a byelection for the position of chief.

The referendum will ask that the two-year residency requirement for chief be replaced by the requirement that a candidate for chief or council be “ordinarily resident” in the K'atl'odeeche Nation traditional territory. Temporary absences for medical treatment or education would not affect ordinary residence.

Dates for the referendum and byelection, says the Notice to Members, will be decided by the incoming council. That incoming council will be sworn in after the successful candidates from the November 2021 election have their names published by the election officer. When that publication will take place is not stated.

K'atl'odeeche Nation administrator Gary Yablonski, who is noted as contact person on the Notice to Members, did not respond to a request by Windspeaker.com for an interview.

Holding the referendum before the byelection for chief is not practical, said Cardinal.

K'atl'odeeche Nation was hit hard by floodwaters from the Hay River in mid-May. The reserve, along with the town of Hay River, was evacuated. On the reserve, homes and infrastructure were badly damaged.

The focus now has to be on getting homes ready for people to move back, said Cardinal, who points out that K'atl'odeeche First Nation Corporation, of which he is chair, is undertaking much of the work in order to create local employment.

“Customary election (code) needs to be changed. That can only happen through a referendum. That’s not going to happen right now. So we need to move forward (with the election of the chief)…because it’s a lame duck government right now where we can’t make any decisions,” he said, which will only harm band members and programs.

Cardinal also stresses the importance of a customary election code that complies with the law.

“We’re not above the law here. The constitutional rights apply to everybody,” he said.

Cardinal says he doesn’t want to see the issue go back to lawyers and more money spent on legal battles.

“We can resolve it. Let’s move the election forward. Let the people decide who they’re going to elect. Let’s get the process going,” said Cardinal.