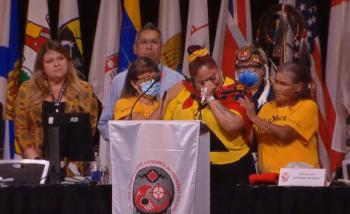 Chantel Moore’s mother Martha Martin becomes overwhelmed during her address to the chiefs-in-assembly July 7 at the Assembly of First Nations annual general assembly in Vancouver.

On July 7, the final day of the three-day AGA in Vancouver, family members of Chantel Moore and Noelle “Ellie” O’Soup spoke of the losses they had endured with the deaths of their loved ones. On July 5, a blanket dance was held for the Young family of Red Earth Cree Nation, Sask. Five-year-old Frank had been missing for more than a month. His remains were discovered Saturday.

Moore, 26, a member of the Tla-o-qui-aht First Nation, was shot and killed June 4, 2020, by a police officer in Edmundston, NB, while he was conducting a wellness check. Police allege Moore had been holding a knife and advanced on the police officer. She was shot four times.

O’Soup, 14, a member of Key First Nation, was reported missing from her Port Coquitlam foster home on May 12, 2021. Her body was found on May 1, 2022, in a single-room occupancy building in Vancouver’s Downtown Eastside. The cause of her death has yet to be determined.

“The inevitable realization through too many of these testimonies is Canada continues to fail you,” said Crown-Indigenous Minister Marc Miller, who spoke after Olivia Louie, O’Soup’s cousin. “This tragedy is ongoing and we have to recognize as a society that we’re doing far too little to bring it to an end.”

Louie said the child welfare system was such that it incentivized the removal of Indigenous children from their homes.

“Noelle lost her life while in the care of (BC Ministry of Children and Family Development). Noelle deserved so much. She deserved to feel safe, loved and to be with family. The root of this tragedy is family separation,” said Louie. “Noelle lost her life to one of these racist systems, a system that when conceived, intended genocide.”

“As of today, I’ve been advocating for my daughter since her passing, and I have committed wholeheartedly to fight for change because I know, up until now, we keep adding names. We are up to a number of 1,812 (missing and murdered Indigenous women and girls) and that’s not been an updated list yet. We continue to add names every time we’re doing an event. As a mother, I am outraged. I’m angry. Our children are being killed and I feel like they think we’re disposable,” said Martin.

She called for changes in policing that would involve more transparency through the wearing of body cameras and said there was a need for cultural training. She also criticized the practice of police investigating police.

“I’m going to continue being a voice for my daughter and everyone else who’s lost their lives to law enforcement,” said Martin.

St. Mary’s First Nation Chief Allan Polches pushed Justice Minister and Attorney General David Lametti to back the New Brunswick chiefs in their call for an inquiry into Moore’s death. He said three requests for such an inquiry have been ignored by Premier Blaine Higgs’ government.

“I expect the federal government to put some pressure on the government of New Brunswick to have inquiries. There’s many Indigenous brothers and sisters that are dying at the hands of police in this country and there's no answers to that because no one is taking responsibility,” said Polches.

“As the leader in my community and in my nation I have to carry that burden. I have to carry that sadness that we already face. The government of New Brunswick claims there is no racism in their system. And I need you to assist us Indigenous people when it comes to inquiries when we ask for them.”

Lametti committed to deliver the concerns to Public Safety Minister Marco Mendicino as police fall within that portfolio.

The body of Frank Young was discovered in a river on Red Earth Cree Nation near the area where the boy had originally been reported missing from on April 19.Little Frank’s grandmother Teresa Whitecap had made a plea at the AGA for support in the search. During the course of the three days, chiefs and others donated more than $13,000 to help.

Following the discovery of the boy’s body, National Chief RoseAnne Archibald issued a statement on Sunday saying she was “devastated” to learn the news. She called on the federal and Saskatchewan governments to provide ongoing mental health supports for family and community members in Shoal Lake and Red Earth Cree Nations.

“Our children are loved and every child matters,” said Archibald.