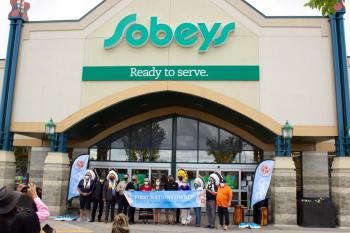 Nikihk products were introduced to a Sobeys location and they are flying off the shelves. They were created by the Battlefords Agency Tribal Chiefs when cleaning products became scarce because of COVID.

“It was basically to deal with a shortage of products. It was only meant for some of our First Nations. We were just trying to fill a gap.” — Neil Sasakamoose, president of Nikihk
By Sam Laskaris
Local Journalism Initiative Reporter
Windspeaker.com

Officials with the Battlefords Agency Tribal Chiefs (BATC) came up with a distinctive idea in their quest to combat what was a national shortage of sanitizing solutions in the early stages of the COVID-19 pandemic.

And now BATC has a much more pleasant challenge, to try and keep up with the demands of their Nikihk products, which they created and are now flying off the shelves at various locations in Saskatchewan.

As a result, BATC officials utilized a van that would travel to various cities in the hopes of purchasing as many products as possible, which would then be distributed to its members.

“We were purchasing in bulk and then that turned into arguments with other people standing in lines,” Sasakamoose said.

Once stores started limiting the number of products each individual could buy, Sasakamoose said BATC officials went to another source.

“We tried bulk stores,” he said. “But there just wasn’t enough on the market.”

An idea was then spawned after Sasakamoose met with people from EnviroWay, a manufacturing plant in Saskatoon. He discovered the company was building home sanitizing kits and sending them to 17 countries in Europe.

Further discussions between BATC and EnviroWay led to the creation of the company Nikihk, which comes from the Plains Cree language and translates to My Home.

The name also reflects the fact company reps have developed safe and quality-tested items, ones they want consumers to feel comfortable bringing into their own homes.

These products then started finding their way into the homes of BATC’s First Nations.

“It was basically to deal with a shortage of products,” said Sasakamoose, who continues to serve as BATC’s executive director but is now also the Nikihk president. “It was only meant for some of our First Nations. We were just trying to fill a gap.”

The Nikihk company received a tremendous boost last September when it was contacted by Indigenous Services Canada, which was looking to purchase 57,000 home sanitizing kits. These kits would then be distributed as incentives to both Indigenous and non-Indigenous individuals who showed up for vaccination clinics throughout the province of Saskatchewan.

“They were giving us really good comments about our products,” said Sasakamoose, whose father Fred was an Indigenous hockey legend that played in 11 games with the National Hockey League’s Chicago Blackhawks during the 1953-54 season.

Fred Sasakamoose died this past November at the age of 86.

Sasakamoose is thrilled his company agreed to provide the kits, which were valued at about $28 each, to Indigenous Services Canada.

“It was probably the best thing we did,” he said.

That’s because one of the individuals who received a kit ended up being the owner of a Sobeys franchise in Saskatoon.

Sobeys is one of the largest food retailers in Canada with more than 1,500 stores across the country.

The Saskatoon-based Sobeys owner agreed to do some market testing by carrying various Nikihk products on his shelves. Sasakamoose said a couple hundred items were placed in the store.

“It tells us and it tells them there is a real demand for these products.”

Others are also beginning to take notice.

Two other Sobeys stores in North Battleford and Regina in the province are now also doing testing with Nikihk products on their shelves.

“Our goal is to get into every Sobeys store in the country,” he said.

Federated Co-operatives, which has about 23,000 employees, is one of the largest co-operative federations in western Canada, providing procurement and distribution of various products to its members.