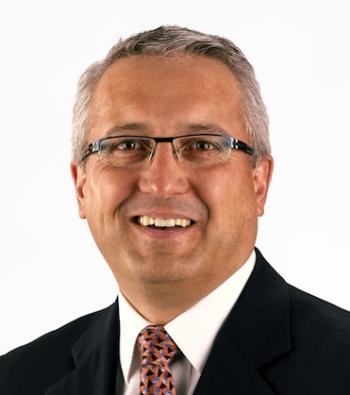 Keith Martell will be receiving an honourary degree.

After years of hard work—driven to improve the economic conditions for the Aboriginal people he serves—Keith Martell, one of the original founders of the First Nations Bank of Canada, will be receiving an honourary degree.

Martell is from the Waterhen Lake First Nation (Saskatchewan), and graduated in 1985 from the University of Saskatchewan with a Bachelor of Commerce degree. The U of S is now bestowing on him an honorary Doctor of Laws from their College of Law and Edwards School of Business. Martell will address the graduating class when he receives the honor during convocation June 1.

“Work ethic is important. I know people don’t like to hear that. There’s a lot of this ‘Dragons’ Den’ idea that says you’ll think of the best idea overnight and make a million dollars. That’s a rare occurrence,” said Martell.

Martell’s interest in business and economics started from a young age, so the Bachelor of Commerce degree, and the job he found later in accounting, were natural for him.

While growing up, he had watched his father and grandfather sit on the band council for Waterhen Lake for many years. His grandfather and another family member even serving as chiefs.

From them he gained a wealth of knowledge on how to achieve success for himself, including learning the importance of education, despite his father having attended Indian residential school.

“For him, education was a bad experience. But he was still very focused on making sure we understood we had an obligation to do our best, and move forward… Recognizing I had a parent that went to residential school, I think I valued education even more,” said Martell.

“It was never negative for me. It was always positive… but I knew how it could be,” he said.

Martell’s career path involved 10 years as a chartered professional account with KPMG, an accounting firm, before he moved over to the Federation of Saskatchewan Indian Nations in 1995.

With FSIN, Martell worked as chief financial officer. And he, along with other members of FSIN, developed a special “Aboriginal capital project” so they could lend more money to small Aboriginal-owned businesses, which they saw a real need for at the time.

“That became successful by the early 90’s. We saw even more opportunity for First Nations business growth, but felt the banking industry didn’t really understand or support that. Saskatchewan was still in the process of settling land and treaty claims, which brought millions of dollars in. Banks were willing to take the deposits, but not to put good loans behind good businesses,” said Martell.

As an even greater solution, Martell and a few other key people, established the First Nations Bank of Canada. Martell started out as a board member for the bank, but has been the Chief Executive Officer for many years now. Through his work with this institution, Martell has literally changed the lives of Aboriginal people in need of certain financial services.

“First Nations, Métis, and Inuit are our first focus. We understand their environments, the economics, and legal issues on reserves. So we end up giving more financial services to projects than other banks would because we understand them better,” he said.

And Martell has two prime examples of the true impact FNBC services can have for people. One is of a forestry business run by a First Nations band council that was denied loans by a bank which saw them as a “risky” investment, based primarily upon stereotypes about corruption in council.

Martell and the FNBC understood the band’s economic situation very well, however, and granted them a loan, which helped them grow their business so much that the denying bank later came back and offered them even more money as part of a three-way partnership between all of them.

The second example is of the effect of setting up banking kiosks in remote communities. Martell recently met a woman in the north who is now able to have her child support payments come to her on time, rather than waiting three extra weeks for everything to be done through the mail.

But none of this is a story about luck, and Martell will tell you that very plainly. This is, in fact, exactly what he plans to say to graduating students about how they, too, can reach their own goals in life.

“People always say I’ve been lucky. There’s a certain truth to that, but luck is the intersection of preparedness and opportunity,” he said, adding that it’s an expression he had heard in the past.

“If you come across an opportunity and you’re not prepared, it means nothing. But if you’re prepared, people always call that a lucky break… People who always look lucky are probably out there looking for the opportunity,” said Martell.