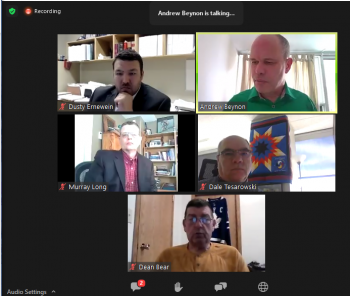 “This is really a symbiotic relationship where each needs the other to make this work particularly in an expedient context.” —Dale Tesarowski, an executive director with Saskatchewan Justice.
By Shari Narine
Local Journalism Initiative Reporter
Windspeaker.com

Two Saskatchewan First Nations will be working with the province to enforce the First Nations' laws on their reserves.

A memorandum of understanding was signed in 2019 in response to the growing frustrations about First Nations having laws that were neither recognized nor enforced on the reserves. Work on the MOU stalled with the onset of the coronavirus pandemic in 2020.

The former chiefs “initiated some discussions with the province trying to find a way to access the provincial justice mechanisms in order to give more teeth to our laws going forward,” said Murray Long, advisor to Whitecap Dakota.

Long was part of a panel on the National Online Conversations on Indigenous Laws held May 25.  The webinars promote dialogue between Indigenous governments and the federal government on “how to address the challenges of creating effective and affordable enforcement systems for Indigenous laws.”

Under the FNLM framework agreement 100 First Nations govern their lands and many have made advances in law making and retaken control over their lands and environment. However, they still face difficulties with the enforcement of their laws.

“The next thing you do, you look to an alternative (and it) has to be through the provincial courts,” said Bear.

Long admits that the relationship between First Nations and Saskatchewan has often been one of “distrust and a struggle” and Bear adds that many First Nations are “leery” about using the provincial system, but both men stressed that this is what works right now.

“This is really a symbiotic relationship where each needs the other to make this work particularly in an expedient context,” said Dale Tesarowski, an executive director with Saskatchewan Justice.

To that end, CSOs will be recruited from the First Nations communities so they will have a connection to community members and leadership. They will undertake provincial training through an existing program and the province will pick up the price tag. However, the operational costs will be carried by the bands.

“Largely with this pilot you’re trying to utilize each others strengths to a certain degree and the CSO program provides a lot of the infrastructure the First Nation may need,” said Dusty Ernewein, legal counsel with the Saskatchewan law firm McKercher.

Once CSOs complete their training, they will be designated under the Police Act as special constables and have the status of peace officers under Saskatchewan law, said Tesarowski.

“The community will create expectations through their laws and CSOs will be the first mechanism for ensuring that people do so,” he said. “It puts them at the forefront in terms of enforcing First Nations laws.”

As for the provincial courts, Beynon noted that the Land Advisory Board Research Council had suggested that the courts inform new court registrars, private sector lawyers and prosecutors of the new standing of First Nations laws.

Tesarowski said he could not compel the courts to do anything.

Tesarowski is hoping that it will eventually go a step further with people from First Nations communities being the ones hearing the case.

“We want … (that) there be perhaps some kind of joint appointment for justices of the peace, either through the Land Management Act or the Indian Act or through a provincial appointment process,” he said.

The general agreement for the pilot project is targeted for Sept. 30.

“How that agreement takes effect may be in some cases may be just going out and starting to do the stuff,” said Long. “We will figure that out as we go, but the idea is to be practical and not get into a long, detailed agreement that everyone fights over.”

He added that the province may need to make some legislative changes.