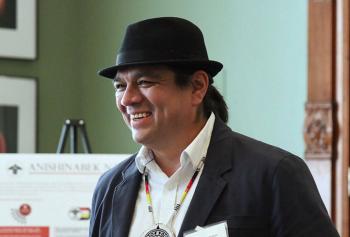 “We were essentially inundated from the Ontario government with what their plans were. As much as I have issues with Ontario Conservatives, I would say the communication was good.” — Scott McLeod, chief of Nipissing First Nation
By Sam Laskaris
Local Initiative Journalism Reporter
Windspeaker.com

It’s quite a contrast between two provinces.

In British Columbia, some Indigenous leaders are furious provincial government officials did not receive consent or even consult with them regarding pandemic reopening plans.

In Ontario, however, some chiefs are praising their provincial officials for not only keeping them abreast of plans but also at times bombarding them with information.

Starting in April, First Nation leaders from across the province were invited to weekly conference calls with Ontario government officials. Premier Doug Ford would occasionally be on those calls as well.

And then First Nations started being invited to more and more calls. Many of these calls, at times daily, were with Ontario health officials.

“It was becoming overwhelming,” said Andy Rickard, chief of Garden River First Nation in northern Ontario. “We were invited to so many different conference calls.”

Besides weekly calls involving chiefs from across the province, Rickard said that both he and members of his administration were receiving invites to almost daily conference calls with Ontario officials.

Many of those calls were with provincial health representatives. Rickard said reps from his First Nation had to pick and choose which conference calls they could join as they were busy dealing with pandemic-related, time-consuming issues at home.

“There was an opportunity to participate for sure,” Rickard said.

“The initial approach was a little delayed because it was around March Break,” Peltier said. “But I’m satisfied with it on a personal level. They’ve done what they could.”

Peltier said between 70 to 80 chiefs from across the province were joining in on the weekly conference calls with Ontario government officials. Those calls are now staged every two weeks.

“For the most part I think the province was listening to us,” Peltier said. “I’m positive most of the issues we had were addressed by the province.”

“We were essentially inundated from the Ontario government with what their plans were,” he said. “As much as I have issues with Ontario Conservatives, I would say the communication was good.”

But that’s not to say chiefs are entirely thrilled with Ontario’s Phase 3 reopening plans, which were announced last week.

McLeod said those from his First Nation are still worried about COVID-19.

“There’s always concerns,” he said. “You don’t know how quickly things can bounce back into negative waters.”

McLeod is pleased to see phased in provincial reopening plans have been staggered, according to which parts of Ontario are faring in terms of COVID-19 cases.

“Ontario’s response has been very good and it has been broken down regionally,” McLeod said.

“We’re finding their reopening plans are pretty consistent with what we’re thinking.”

McLeod is pleased to see recent positive news in his First Nation and surrounding area in terms of number of COVID-19 cases.

“I think things have been relaxed a little bit,” McLeod said, adding he himself has not joined in on a conference call with provincial officials during the past two weeks. We’re kind of monitoring things. Our health department is monitoring things.”

Despite having numerous opportunities to raise a voice with provincial officials, Rickard said he is not necessarily agreeing with Ontario’s Phase 3 reopening plans.

While Garden River First Nation, located beside Sault Ste. Marie, has not had any COVID-19 cases to deal with, Rickard believes it would be best not to have all businesses return to some sort of operations.

“For me as a leader I think it’s a little bit too early,” he said. “The Conservative government though caters to the business and economic development communities.”

Garden River First Nation did have checkpoints allowing only its members in from April 5 through June 16.

“We don’t know who is going through our community now,” Rickard said.

If his First Nation was to have a COVID-19 outbreak, Rickard said it would be in huge trouble.

“We don’t have the resources to combat a pandemic,” he said.

Wiikwemkoong Unceded Territory was also in lockdown, with checkpoints into the community from April 9 to June 9.

Though checkpoints are no longer in place, Peltier said members of his First Nation are not worry free.

“We’re concerned with visitors,” he said. “We’re still limiting tourism activities here. And we still have safety parameters in place.”

Thanks to a massive pandemic awareness program, Peltier is pleased though that the majority of members of his community are aware of steps they have to take in order to remain safe.