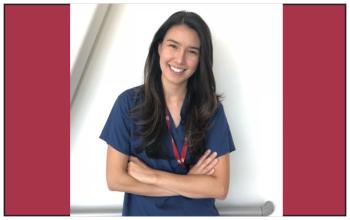 Dr. Donna May Kimmaliardjuk, Inuk cardiac surgeon and co-author of the the report on postoperative outcomes for Inuit.

“I want it to be expressed, surgery is still a safe thing to undergo. You still will receive quality excellent care when you go for surgery.” — Dr. Donna May Kimmaliardjuk
By Shari Narine
Local Journalism Initiative Reporter
Windspeaker.com

A study published today in the Canadian Medical Association Journal shows that Nunavut Inuit fared worse than their non-Inuit counterparts when it came to surgical outcomes at The Ottawa Hospital.

A retrospective cohort study looked at adult patients who underwent inpatient surgery from 2011 to 2018. In that time frame, 17.2 per cent of Nunavut Inuit died or suffered postoperative complications compared to 16.1 per cent of non-Inuit.

“The actual hard numbers aren’t hugely different (at 1.1 per cent), but there is that relative increase risk,” said report co-author Dr. Donna May Kimmaliardjuk, who used to practice at The Ottawa Hospital.

That relative increase risk for Nunavut Inuit is quantified at 25 per cent more likely to die or suffer complications, she says.

Nunavut Inuit only represented 0.9 per cent (928 of 98,701) of patients undergoing inpatient surgery in that time frame at The Ottawa Hospital. Of that, 159 Nunavut Inuit died or had a complication in hospital after surgery.

“It all kind of fits with what I saw,” said Kimmaliardjuk, speaking as both a cardiac surgeon and an Inuk whose family lives in the north.

“Any time anyone comes to surgery with a more advanced stage of their disease…it makes the surgery harder and it increases the risk of complications with surgery and recovery,” she said. “So really you need to address that barrier, which is lack of access to timely and culturally appropriate care.”

The study points out that “multi-dimensional and complex” factors have an impact on the outcomes for Nunavut Inuit, which include access to health care and the challenges of having to travel thousands of kilometres from home for surgeries.

This study marks the first time surgical outcome data for Nunavut Inuit has been collected. Most times such health data is pan-Indigenous in nature, combining Inuit with Métis and First Nations, points out Kimmaliardjuk.

With this data “we can now appropriately redirect our efforts, our funding, our resources, our policies to actually address those gaps in care, those inequities in outcome,” she said.

“These findings help to address an important knowledge gap around surgical and perioperative outcomes for Inuit and highlight the urgent need to improve systems of care, in partnership with Nunavut Inuit representative organizations to help ameliorate outcomes for Nunavut Inuit patients requiring surgery,” says the report.

Inuit organizations can now use this data to advocate for Inuit with the federal and territorial governments, says Kimmaliardjuk.

Kimmaliardjuk isn’t willing to extrapolate the data gathered from this study in order to assume the same surgical outcomes for urban Inuit. She points out that the social determinants for health are different in urban centres compared to the north.

While “ideally” the team would like to conduct a similar study for urban Inuit, Kimmaliardjuk says complications exist in how people may or may not self-identify.

“There’s quite a bit of lack of identity data collection (and) it might be very difficult to get very accurate outcomes or accurate data to look at these outcomes,” she said.

For The Ottawa Hospital study, health card numbers identified patients as Nunavut Land Claim beneficiaries and primarily focused on Inuit from the Qikiqtani-Qikiqtaaluk region because they are in the Ottawa catchment area.

Next for the research team is using the same data to look at the outcomes the first year after surgery: complication rates, lengths of stay in hospital, rates of deaths, rates of re-admission to hospital and discharges to long term care facilities.

This study only takes into account the first 30 days following surgery, which is a “standard benchmark,” said Kimmaliardjuk.

While this study didn’t provide any surprises for Kimmaliardjuk, she admits she doesn’t know what to expect looking at the data for one-year post-surgery.

“I would hope that we would actually potentially see a decrease in the difference in outcomes between Inuit versus non-Inuit,” she said, pointing out that is often the case with trials that “equalize over time.”

With regard to this study, Kimmaliardjuk stresses she doesn’t want Inuit to be wary of surgery at The Ottawa Hospital.

“Yes, we saw 25 per cent increase … in their odds of having a complication, but if you look at the hard numbers … (they) aren’t hugely different and for Inuit who need surgery, I want it to be expressed, surgery is still a safe thing to undergo. You still will receive quality excellent care when you go for surgery,” she said.

“The numbers are very, very similar. We want to use this information to see how can we even improve things even more.”

To read the report visit Postoperative outcomes for Nunavut Inuit at a Canadian quaternary care centre: a retrospective cohort study