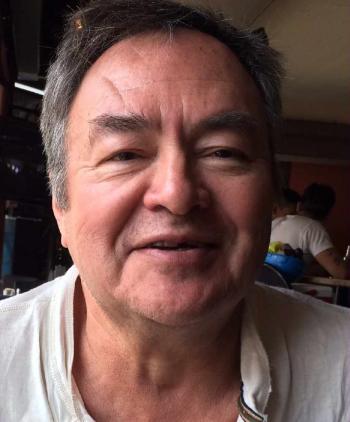 Raymond Yakeleya, Dene filmmaker and director , will offer his perspective of living in mountainous areas.

Mountain research is about more than the unique environment and rock formations. It’s about the people.

“Indigenous peoples’ stories, the people who come from these communities have important things to share about their connections to mountains,” said Elaine Alexie, with University of Alberta North, who has organized “Spirit of the Mountains – Northern Indigenous Stories of Place.”

“We also work to incorporate Indigenous voice and Indigenous perspectives in events relating to the north,” said Alexie, who is Teetł’it Gwich’in from the Northwest Territories.

UAlberta North was approached about six months ago by the Canadian Mountain Network to participate in the festival, she said.

Alexie feels it’s a good opportunity for Edmonton and area audiences to learn more about what the mountains mean.

“We need to also consider the communities and the people who live in mountainous areas,” she said.

“They will be sharing their perspectives about their relation and connections to mountainous areas,” she said. “They’ll talk about their connection to place through song, like drumming and also through film… making that relevance today why these mountains are essential to northern Dene culture.”

The festival will also include discussion around Parks Canada’s proposal to reintroduce a small herd of plains bison to the eastern slopes of Banff National Park. The five-year reintroduction project would be a small-scale and reversible initiative to determine future direction regarding bison restoration in the park over the long-term.

As well, a mountain symposium will feature an interactive discussion about the unique challenges faced by mountain communities. There will also be mountain art and a rock-climbing workshop. Most of the events will be held at the University of Alberta.

The Canadian Mountain Network, which is organizing similar festival events in Banff, Jasper and Canmore as well as areas in the Yukon, was formed earlier this year dedicated to the sustainability of mountain environments and communities across the country and around the world. The network membership includes scientists, researchers, businesses, and community and Indigenous partners, including the Stoney Tribal Administration.