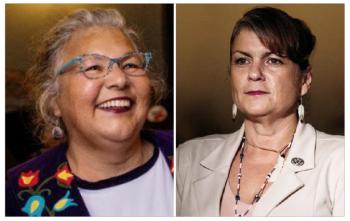 “If we want a healthy country, we have to work for it and we have to work together as one.” NWAC President Lorraine Whitman
By Julie Chadwick
Local Journalism Initiative Reporter
Windspeaker.com

As many provinces move to cautiously open some services in the wake of COVID-19, advocates say Indigenous women still struggle to navigate a variety of challenges that have been exacerbated by the pandemic.

This month, the Native Women's Association of Canada (NWAC) released the results of their needs assessment survey, in which domestic violence emerged as one of the top concerns.

Some key findings were that many more Indigenous women had experienced violence during the pandemic, and there was a strong correlation between the financial impact of COVID-19 and that increase in violence.

In response to the pandemic, many organizations like NWAC and the Ontario Native Women's Association (ONWA) have successfully shifted services and how they're delivered.

However, advocates remain concerned about the impact on Indigenous women who they say are disproportionately affected by the fallout from COVID-19.

“The women were more afraid of being home with the violence, than they were of the pandemic and the virus itself,” said NWAC President Lorraine Whitman, citing the survey, in which a majority of women said they were also “very concerned” about Elder and child abuse.

Whitman describes the interlocking issues as being like “a basket”, in that they all fold in on one another and weave together.

“There's not enough housing, there's overpopulation in housing, and that leads to what we're dealing with today with violence that's occurring more with our women in the homes, because they can't get away from the abusers,” said Whitman. “You have Elder abuse, who still live in the home because of the multiple families, and you have abuse of young children that can't escape. They're not in daycare. They're not in schools. They're not even in any of the playgrounds.”

Those already in precarious or domestic violence situations may find that suddenly their normal safety plans are no longer possible, said Dr. Dawn Lavell-Harvard, president of ONWA.

“So there's this constant weighing back and forth of which is the greatest risk,” she said. “We have had to be more creative in terms of our family violence workers, our family violence responses. Obviously going to a shelter during a pandemic is not a good thing. We have to look at things where families can escape violence but not put themselves at risk of the virus.”

One of the ways ONWA has addressed the challenge is to offer at-risk women a paid cell phone that they can hide, use to privately access online services like counselling, or take with them while on the run.

Prior to the pandemic, housing, childcare, and economic opportunities for Indigenous women were also pressing issues that have now been exacerbated: either lack of employment or risky front-line work, isolation, especially in remote locations, disruptions in support networks of friends and family, and the extra burden of having children home from school. In many cases, the access to food that school provided has also been curtailed.

Many of these challenges are ones of basic survival, Lavell-Harvard said. Early on, ONWA scrambled to ship supplies of food, toilet paper and personal protection equipment up to vulnerable Northern communities and bundled up basic supplies like diapers and sanitary products into “go bags” that were widely distributed.

“We had quite a number of cases of Elders who were afraid to leave their homes to go get groceries or go pick up their medicine. Literally, Elders breaking down in tears and crying when they were given the gift of hand sanitizer because it allowed them to leave their homes,” said Lavell-Harvard.

The subsequent impact of these burdens on mental health has resulted in a steep increase in demand for counselling and emotional support services over the last few months.

NWAC established a 1-800 number to take calls and four Elders have been made available to talk and assist people in crisis.

The pandemic has created “massive increases in need for mental health services,” and the counsellors have been overburdened, says Lavell-Howard.

“There was that sort of first wave where everybody was in a panic, and then actually we're seeing a resurgence right now as everybody realizes that this is not short term, as the isolation and depression and anxiety kicks in.”

Though these issues may seem insurmountable, the federal response to COVID-19 demonstrates just how quickly the government can mobilize to address an urgent issue, said Whitman. In light of this, she finds it inexcusable that the government is dragging its feet on delivering their national action plan on missing and murdered Indigenous women and girls.

The strategy was due to be unveiled this month, on the anniversary of the Inquiry, and has now been delayed.

“We have sent in recommendations and suggestions from grassroots women when we had a roundtable discussion on MMIWG. There were suggestions that were sent to [the office of Crown-Indigenous Relations] and they neglected to read it. So there's no excuse,” said Whitman.

Solutions to many of these issues have been identified and just need support in their implementation she says, such as setting up resiliency centres aimed at Indigenous women, youth, and gender-diverse populations in every province.