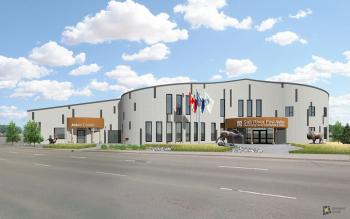 First Nations across the country need about $35 billion for infrastructure, and Ottawa only provides about $2 billion in funding each year.
By Shari Narine
Windspeaker.com Contributor

Investors come from across Canada, as well as parts of the United States and Europe, and they like what they see.

What the First Nation Finance Authority (FNFA) is offering is in high demand, and that’s good news for nations pursuing a variety of projects through loans from investor dollars.

In late October, the FNFA issued its sixth and largest debenture, raising $170 million for a variety of projects in 22 First Nations. This brings the total debenture issuance to $678 million to 89 First Nations since 2014.

The FNFA works with a bank syndicate comprised of all the major banks in Canada. That syndicate finds potential institutional investors for the FNFA.

Twice a year, Daniels and other members of the management team do “the investor roadshow,” meeting with the investors to ensure that they “are comfortable with FNFA’s story.”

Once the comfort has been established, then investors determine if the investment fits their portfolios.

“All these companies that have lots of money, they see the value in what we’re doing. It’s because of some of the social nature (of the projects), plus there’s lots of green energy projects that we finance as well. It’s a combination of those types of things,” said Daniels.

“Canada doesn’t have a lot of money to fund what’s needed in our communities,” said Daniels. That’s where FNFA comes in.

One such need was the community/conference centre in Salt River First Nation, N.W.T.

The $17.5 million facility had been in the planning stages for years. Financing through the FNFA, plus strong financial management by the band council, made it happen. The grand opening of the centre occurred last April.

Being able to qualify for financing through the FNFA is a testament to the hard work undertaken by the previous chief and council, said Chief Dave Poitras.

“It means our finances are in excellent condition.” Poitras noted that waiting for funding from Ottawa to build the centre would have meant delays.

“It’s a pretty big commitment the (federal) government would have to do to lend us money,” he said.

Canada pays fully for projects and does not finance work. First Nations across the country need about $35 billion for infrastructure, and Ottawa only provides about $2 billion in funding each year, Daniels explained.

In a letter written to members this past February, former Salt River First Nation Chief Frieda Martselos, reported that annual revenue streams such as GST, fuel tax, tobacco tax rebates and devolution revenues were “more than adequate” to cover the $95,000 monthly payment for the investment loan. She also noted that the new building, which had a seating capacity of more than 400 in the conference centre, could generate revenue.

“If … SRFN struggles to repay its loan, FNFA has the right to assume management of our revenue streams to ensure they continue. There are no other SFRN asset pledged to secure our 20-year loan with FNFA,” wrote Martselos.

It is a safeguard under the First Nations Financial Management Act (FNFMA) that allows FNFA to flow the borrowing First Nation’s own source revenue directly into a trust account. Another safeguard creates an overall Debt Service Reserve fund. This gives FNFA a strong reputation as a low-risk venture for investors, said Daniels.

No First Nation has ever defaulted on a loan with the FNFA, he said.

Canada will never catch-up to the infrastructure gap, “if they keep going the rate they’re going,” said Daniels. “So they’re looking to expand what we can do, because it may take up some of that slack.”

Possible changes to regulations in the FNFMA in the next year could allow the FNFA to expand its reach beyond Indian Act bands and help finance projects undertaken by self-governing bands, as well as organizations.

Daniels is looking with interest at what is happening in Alberta with the provincial government’s newly-created Alberta Indigenous Opportunity Corporation (AIOC). He says Alberta consulted with FNFA as it was setting up the billion-dollar Crown corporation, which aims to backstop Indigenous energy development with loan guarantees.

Unlike FNFA, which will finance a variety of projects and offers low-risk to investors, Daniels said the AIOC “is all for the resource sector, which is very risky in Alberta right now.”