Film about Indigenous women fleeing violence a hard sell to producers, so filmmaker produced it herself 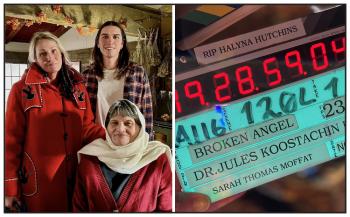 “What hit me the most is seeing the other Indigenous crew crying like that. Because it becomes your normal. You come desensitized when this is indeed your past. It shouldn't be normal, but I think for a lot of us, it is kind of normalized in a sad way.” — Dr. Jules Arita Koostachin
By Odette Auger
Local Journalism Initiative Reporter
Windspeaker.com

Dr. Jules Arita Koostachin’s new film Broken Angel has completed filming at locations around Vancouver. Though filmed within 12 days, the seed of the idea was a long time in germinating. Koostachin’s film is based on her work in the social service sector as a director of one of the first Native women’s shelters in Canada. She tells the story with a cast and crew largely made up of Indigenous people.

“We needed to tell the story, and I had access. I had the lived experience. I had direct contact working with women and children who are fleeing domestic violence,” Koostachin said.

She began taking screenwriting classes at night school at George Brown in 2006. Broken Angel began in those classes. “So, it’s been a really long journey,” the filmmaker said.

The film is inspired by incredible stories of resilience and strength, Koostachin said.

“And the fact that Native women, they can have these traumatic experiences, but when we all gathered and sat around the kitchen table, there would be a lot of laughter and sharing stories and warmth and sharing food,” she said.

Koostachin pays close attention to how these types of stories are told.

“I was very, very aware not to tell a saviour story, where someone's going to sweep (main character Angel) off her feet. In Broken Angel, she actually finds healing through ceremony and reconnecting with the community, as opposed to a saviour character.”

Koostachin had a lot of difficulty getting the film produced. She heard ‘No, we don't want to tell this story’, ‘There is no need for this story’ or ‘Why didn't she leave?’, a question that often springs from a lack of understanding about the complicated circumstances of domestic abuse.

Koostachin has strong responses ready to those questions. The story is important “because Indigenous women are experiencing violence. We can’t censor this. This is our reality. This is our lived experience.”

So, Koostachin produced the film herself by developing her own production company called AaSheNii Productions Inc. She worked with Second Son Productions Inc, which provides business and administrative services to such independent producers as Koostachin.

MacArthur plays Angel, a woman escaping from an abusive partner to a women’s shelter.  Her daughter is 12-year-old Tanis, played by 15-year-old Letexier-Hart. “She was so excited about this character. She's an instigator… She fights. She stands up for herself. And she's always there for her mom.”

Koostachin is a child of residential school survivors.

“I remember feeling like I was the parent for a lot of my younger years,” she said.

“In the first act of this film, we do see Tanis. The young character is playing that role of parent. And then we see in the second act, that flips. We slowly see the mother gain her strength.”

Although this film has darkness, there is humour, too.

“I've kind of let the actors play a little bit, because we're humorous people and we use humor to heal. So it comes through. There's some very funny moments in there.”

Working with younger actors around this content took extra care. Parents or caregivers read the script, and understood the content. The actors had the maturity to process it, said Koostachin.

“What is a sad reality is a lot of the Indigenous youth already are so very aware of the violence against our community.”

Koostachin ensured to follow protocol and check in with everyone and make sure everyone was okay with the content, and how scenes were filmed.

“We've seen a lot of violence already, so we were tactful and creative in how we did it. A lot of thought went into that for sure. There’s a very different approach when you have a lot of women behind the scenes,” she said.

“We had ceremony, we had smudging, we had knowledge keepers to start our journey off. And then we just reminded the cast and crew why we were doing this, for murdered and missing Indigenous women, to shed light on this issue.”

There is an emotional toll to pay in telling these stories. Koostachin reminded crew of the services available if they were feeling triggered, and addressed them at safety meetings.

“We did a lot of debriefing, just as we would in the social service sector after shifts,” said Koostachin.

“What hit me the most is seeing the other Indigenous crew crying like that. Because it becomes your normal. You come desensitized when this is indeed your past. It shouldn't be normal, but I think for a lot of us, it is kind of normalized in a sad way.”

Koostachin hopes this film will open up conversations. She saw that starting to happen during the filming.

“Men come up in tears and talk to me about it. So I feel like that is a way forward. Where we can let those emotions go freely, and have open conversations, and people were thankful for this important story.”

Broken Angel had funding for just 12 days of filming. Working with young actors, having to do her own acting, filming on three locations, and one scene done in a car, “in 12 days. I honestly don't know how we did it.”

Filming was also challenged by flooding, evacuations and trees falling.

Koostachin is a spiritual person.

“I believe that we had a lot of protection and support from the other side,” she said. “There were days where it felt like we're not going to finish this film in 12 days. But we did.

“Eagles flying over us, rainbows, and we had good weather when we did our feast scene.” Koostachin said the break in weather for the scene came during a week of torrential rains.

Koostachin was raised by her Cree-speaking grandparents in Moosonee, Ont., and by her mother in Ottawa. She’s a member of Attawapiskat First Nation, the ancestral lands of the MoshKek AsKi InNiNeWak.

One of the beautiful things, said Koostachin, was working with her son and her mother, who played a grandmother. Koostachin has a photo of her great-grandmother wearing a red sweater and a dress. Wardrobe dressed the filmmaker’s mother up to match that photo.

“And my mom looks so sad on camera. I asked, ‘Mom, why were you so sad?' ‘Because I just miss my grandma. I miss my kokum’. She has fond memories of her grandmother before she went to residential school. It was a really important time in her life.”

With the moments of sharing and connecting during filming, Koostachin believes it provided confirmation that storytelling is bigger than any of us.

“I always believe that story carries agency. Story has the capacity to change perspective, and it's medicine.”
Local Journalism Initiative Reporters are supported by a financial contribution made by the Government of Canada.