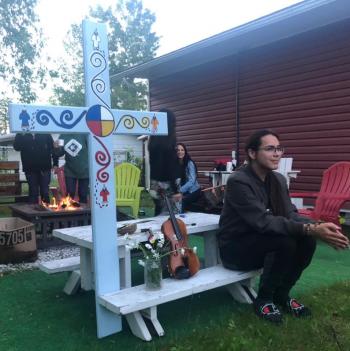 Tristan Durocher takes a Walk With Our Angels. Photo from Facebook.

“Once I step onto the lawn of the Legislative Assembly, I’m going to begin a hunger strike until our government is willing to call an emergency session and pass the piece of legislation that they [the Saskatchewan Party] voted down.” — Tristan Durocher
By Marjorie D.L. Roden
Local Journalism Initiative Reporter
Windspeaker.com

On July 2, 25-year-old fiddler Tristan Durocher, along with select friends and family, started the long trek by foot from LaRonge, Sask. to the provincial legislature in Regina to raise awareness of an issue affecting Indigenous communities across the province. The effort is called Walking With Our Angels.

“Saskatchewan has the highest suicide rate in Canada,” said Durocher.

“Suicide is the leading cause of death in Northern Saskatchewan for the demographics age 10 to 46, outbeating fatalities related to alcohol-related accidents, gang violence, drug overdoses, and lateral violence, which is pretty horrifying to anyone that reads that statistic.”

Doyle Vermette, the NDP member of the Legislative Assembly for the Cumberland constituency, brought a bill forward to address the suicide crisis.

“That bill was voted down” in June, Durocher explained. “All 44 people [from the Saskatchewan Party] who had the capacity and the chance to make a difference and pass this legislation said no.

“I found that unacceptable, because “Pillars of Life” (The Saskatchewan Suicide Prevention Plan), as of now, is the only suicide response plan the Saskatchewan Party has and it’s not a legislated piece of a document, meaning there’s no accountability for any follow through, and when you look at the past predominant pattern of behaviour for this party, being complete inaction and lethal indifference, it does not inspire a lot of confidence.”

The five pillars of the plan are specialized supports; training; awareness; means restrictions and means safety; and research, surveillance and evaluation.

Durocher said he started fiddling when he was nine years old. “

The support for Durocher’s long walk has had a mixed response, from the very positive to the very negative.

During the earlier part of the awareness walk, Durocher recalled how the leaders in the northern Saskatchewan First Nations reacted to his journey.

“There have been several reserves across Northern Saskatchewan that have declared states of emergency because of suicide epidemics, and out of all the chiefs in this province of Saskatchewan, only one walked with us for the afternoon. That’s disheartening to me because what I am trying to do is help bring services, support, and acknowledgement to our youth who are hurting because for every 30 girls that end their lives in the province of Saskatchewan, only one is not Indigenous. These are our Indigenous children that I’m trying to save, and I expected more support than I have received from the chiefs that call themselves leaders in this province.”

But Durocher was heartened by other leadership.

“We’ve had women join us from Pelican Narrows, who have a group called Walking Out of Darkness, which is their own suicide prevention group, grassroots, and they walked with us all the way from Prince Albert to Saskatoon.”

Among the women in this group was one whose twin sister had committed suicide, the mother of a suicide victim, the aunt of another suicide victim, and a lady who tried committing suicide three times.

“I walked in the presence of their profound resilience,” Durocher said, adding “They totally eviscerated any doubt that I may have carried because to be amongst them and to see the strength of their willingness to move forward and continue on their healing journeys, despite unimaginable pain of losing someone you love suddenly, it filled me with inspiration and hope.”

Duroucher has had his supporters, and his detractors during his journey, even at times receiving discouraging online messages.

“Comments along the lines of I’m a self centred egotist who is doing this for attention and I really don’t care about anybody. And that, to me, is sickening because I care so much that I’m willing to walk amongst a racist southern prairie as an Indigenous boy in a province where Gerald Stanley could take one of our lives and walk away free to a safe house, escorted by police for his protection.” Duroucher is referring to the Saskatchewan farmer who was acquitted in the shooting death of Colten Boushie.

“Once I step onto the lawn of the Legislative Assembly, I’m going to begin a hunger strike until our government is willing to call an emergency session and pass the piece of legislation that they [the Saskatchewan Party] voted down.”

“It was criminally negligent because they have a fiduciary responsibility to provide mental health services to the residents of this province and they failed.”

Tristan Durocher is expected to arrive in Regina sometime this coming Friday.