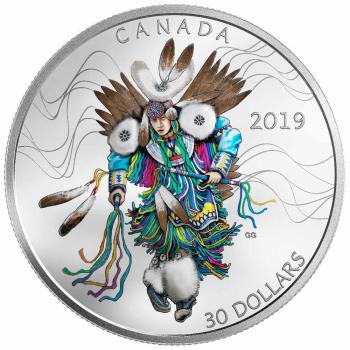 The reverse image by Kanien'kehá:ka artist Garrison Garrow captures the fast-paced energy of the powwow dance style. A male dancer dominates the reverse, where finely-detailed engraving “adds a sense of energetic movement while an application of colour highlights the intricate nature of his regalia.” The obverse features the effigy of Queen Elizabeth II by Susanna Blunt.

"This land's cultural heritage began with the art, music, dance, and traditions of Indigenous peoples, and it is exciting to see these traditions reflected in a new coin from the Royal Canadian Mint," said Marc Miller, Parliamentary Secretary for Crown-Indigenous Relations, who attended the coin's unveiling.

"As we work toward meaningful reconciliation and a future where all Indigenous peoples have a real and fair chance at success, the inspiring design of the Mint's Fancy Dance coin reminds us of the importance of recognizing and celebrating Indigenous traditions."

"The Royal Canadian Mint prides itself on telling the fascinating story of Canada through coins, and celebrating First Nations, Inuit and Métis cultures is fundamental to achieving that goal," said Jennifer Camelon, Interim President and CEO of the Royal Canadian Mint. "Our beautifully coloured coin celebrating the dazzling art of the Fancy Dance is yet another opportunity for Indigenous artists from across Canada to share their talent, traditions and cultures.

The coin can be ordered as of today by directly contacting the Royal Canadian Mint at 1-800-267-1871 in Canada, 1-800-268-6468 in the US, or online at www.mint.ca.  It will also be available at the Royal Canadian Mint's boutiques in Ottawa and Winnipeg, at participating Canada Post outlets, and through the Mint's global network of dealers and distributors as of Oct. 2.