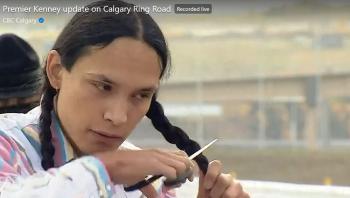 seth cardinal dodginghorse cuts his braids at a press conference to open a stretch of the Tsuut’ina Trail that displaced his family. Photo a screenshot of a CBC News livestream.

“There is a time and place for everything. This is not the time or place.” — Tsuut’ina Chief Roy Whitney
By Shari Narine
Local Journalism Initiative Reporter
Windspeaker.com

The young Tsuut’ina member cut off his braids and left them on the portion of Calgary’s southwest ring road that displaced his family six years ago.

“I’m going to speak and you’re going to listen,” said artist dodginghorse as he moved in uninvited and undisturbed to take over the microphone after Calgary Mayor Naheed Nenshi congratulated Tsuut’ina Chief Roy Whitney for his hard work in getting the ring road realized.

“Today is not a day to be shaking hands and smiling. Today is a sad day. My mom is probably at home right now crying. She’s probably going to continue to be crying for the rest of the day and for who knows how long? This is something that affects my family and I need you to know that. My family has been mourning for years,” said dodginghorse after reading a letter his mother had written about being displaced from land.

dodginghorse’s mother wrote that her land, 210 Weaselhead Road, had been the home of five generations of Tsuut’ina grandmothers. She also wrote that she was not included in any discussions about the ring road or her land.

She said she was forcibly removed from her land in 2014 and “erased” from any services offered by Tsuut’ina. She said that a pledge made by Whitney to “walk” with the displaced families had not happened.

“You can’t build prosperity and you can’t build relationships when you erase the women that came from this land,” said dodginghorse.

Whitney responded strongly when asked by a freelance journalist, who has been following dodginghorse’s story, to comment.

“It was a community decision and, as our Elders would say and I am an Elder now so I can say it, there is a time and place for everything. This is not the time or place,” said Whitney.

“If a statement has to be made, it should be made internally by nation members…We conduct our business among ourselves. We don’t do it here.”

Whitney said that about 80 per cent of members voted in favour of the building the ring road.

“It was voted on in terms of the future generations,” he said.

Nation members approved the deal offered by the province, the chief said, which would see other land exchanged for the property needed to build the Calgary ring road. He said there were agreements signed with every displaced family to receive homes or land.

Whitney and Nenshi were joined by Premier Jason Kenney, Transportation Minister Rick McIver and local Calgary-Glenmore MLA Whitney Issik to open a stretch of the Tsuut’ina Trail, which will now see traffic flowing southwards from Glenmore Trail and Sarcee Trail over three crossings across the Elbow River in a stretch that will include a tunnel at Weaselhead Road linking the Tsuut’ina First Nation.

The 12-kilometre portion that is now open makes up just under 40 per cent of Tsuut’ina Trail, which remains on track for completion in fall 2021.  Construction of the Tsuut’ina Trail has created about 2,000 jobs.

The total estimated cost of Tsuut’ina Trail is $1.4 billion, with $459 million committed by Alberta in Budget 2020 over three years and $333.6 million from Canada through the National Infrastructure Component.

Kenney called it a “historic day of partnership and prosperity.”

“(This was a) win-win solution with the nation to ensure that they could reap the benefits of this major infrastructure project as with all of the residents of Calgary and area,” he said.

Kenney recalled making the announcement to fund the ring road in 2015, when he was a federal minister with the Conservative government.

“It’s pretty cool to see things that you announce as concepts actually become asphalt and become big infrastructure that will improve peoples’ lives,” he said.

The ring road has been in planning for 50 years, said McIver, and in informal discussions for another two decades.

McIver has also followed the project from the start.

“It was my hope then and still is now that this agreement and this piece of infrastructure will lead to hundreds of years of prosperity and good employment for the people of the nation while building on long-term friendship and partnership between the nation, the city and all of Alberta,” said McIver.

Whitney, who has served as chief intermittently for 22 years, was also involved at the beginning of the project.

“The patience, the understanding of our community, the forward thinking that they had in terms of the opportunities that will create economic prosperity, and jobs for future generations, that’s when the decision was made for this roadway. It was the thinking of that generation to provide this opportunity to move forward,” said Whitney.