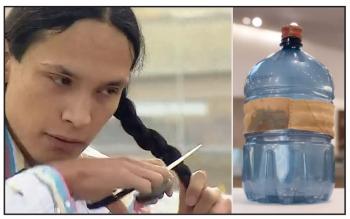 “The connection is me,” said Tsuut’ina Nation artist seth cardinal dodginghorse, linking his work for Contemporary Calgary and his protest at the opening of the southwest Calgary ring road last October.

dodginghorse spoke virtually yesterday, the final speaker for Contemporary Calgary’s Water Event. His exhibit, entitled The Glenmore Rezerveoir, is a water jug with a label made from elk hide parfleche. Writing is painted on the inside of the label and can only be read if it’s “really bright out” and the jug is angled. The label reads: “You drink Tsuut’ina land.”

dodginghorse said he was approached in August by the gallery to be one of six Indigenous artists to produce a water sculpture as part of political activist Yoko Ono’s exhibition, Growing Freedom.

Two months later, he stood at the opening of Tsuut’ina Trail, unofficially called Calgary’s southwest ring road, and cut off his braids, offering them to the portion of the road that displaced his family six years earlier from their generations-held land.

dodginghorse’s family was forced off their land in 2013 because of the ring road. That land had been in the family since his great-great grandmother. His mother and her siblings had grown up there. Many Tsuut’ina people beyond dodginghorse’s family members had connections to that land. When living there, dodginghorse said the water they drank was “some of the most beautiful, delicious water you could drink.”

His family moved to another piece of land on the Tsuut’ina reserve. They were told not to drink the water from the tap because of numerous environmental concerns, including nearby fracking. His family had to drink water from jugs.

In 1932, dodginghorse said Tsuut’ina Nation was “pressured” by Calgary and the government to sell 400 acres of reserve land to the city. That land became the Glenmore reservoir and provides safe drinking water for Calgary residents.

“There’s just so much loaded history behind Glenmore reservoir and my family as well ... It’s very strange and very ironic that my family, once we moved, in order to drink water we had to drink water from land that was originally part of Tsuut’ina. That was like essentially purchasing water back from ancestral lands,” said dodginghorse.

Having to be concerned about safe drinking water is not unique to Tsuut’ina, said Dodginghorse, noting that boil water advisories are common in many First Nations communities right across the country.

While some artwork takes time to conceive and time to determine the medium, this piece was readily conceived, dodginghorse said.

“It was very easy to make but then thinking about the history behind the objects, behind my family’s history, all of these connection, is one of those really nice pieces in a way where I made this and then afterwards I started thinking and analysing and really understanding what I had made,” he said.

dodginghorse said he prefers his work to be “blunt and in your face.” He wants people to “get” what he is saying with his art and not have to ponder it for “three hours” before the message sinks in.

dodginghorse has been showing his work in Calgary galleries for about six years. He said he understands that this venue only reaches “a certain crowd.”

“A lot of the people that were involved in a lot of these decisions historically that are still here, aren’t really the type of people that go to galleries. With this type of work has like the focus on reaching out to the average white Calgarian that goes to galleries,” he said.

Ryan Doherty, chief curator of Contemporary Calgary, who hosted the virtual talk, said dodginghorse’s piece was popular with gallery goers, many of whom came after dodginghorse cut his braids at the ring road opening.

“That seemingly mundane container is in fact so loaded,” said Doherty.

When Contemporary Calgary was tasked with asking a new group of artists to collaborate with Ono in this iteration of Water Event, Doherty said he knew it had to be a group with which water had an “enormous significance.”

“When you consider the long history and impact of the Bow and Elbow rivers to the Indigenous population past and present it seemed the best thing would be to invite artists for whom that connection would resonate in the collaboration with Yoko,” said Doherty.

In 1971, Ono held her first museum exhibition, Water Event, in which she invited over 120 participants to produce a water sculpture.

“As Yoko herself noted to us, (this) was one of the best iterations to date,” said Doherty.