Faith in reinvestigation of nine deaths in Thunder Bay is lacking 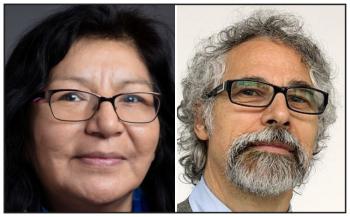 “…we have very serious concerns with what happened in Project Broken Trust and we don’t think that the Thunder Bay Police Service should undertake any more investigations until we’ve learned what didn’t go right with Project Broken Trust.” — Jonathan Rudin, counsel with Aboriginal Legal Services
By Shari Narine
Local Journalism Initiative Reporter
Windspeaker.com

The irony can’t be missed: Project Broken Trust has done little to mend the broken trust First Nations people have for the Thunder Bay Police Service.

“It seems to me, as a person looking from the outside, that’s my perception of this,” said Nishnawbe Aski Nation (NAN) Deputy Grand Chief Anna Betty Achneepineskum.

But Achneepineskum is more than “a person looking from the outside.” She holds the portfolios of justice, policing, and inquests for NAN and is family with a personal stake into two of the youths’ deaths.

Project Broken Trust began in 2019. It was the name given to the reinvestigation into the deaths of nine Indigenous youth in the city. It was the second recommendation of 44 made by the Office of the Independent Police Review Director in Broken Trust: Indigenous People and the Thunder Bay Police Service. That report was delivered in late 2018 and found evidence of systemic racism in the police service.

The work of Project Broken Trust was overseen by an executive governance committee which included a NAN representative and Elder. But it also included Thunder Bay Police Services (TBPS) Chief Sylvia Hauth, despite the fact the reinvestigations were warranted because of the way TBPS handled the original cases.

As well, membership in the team to carry out the reinvestigations included three TBPS detective constables and a TBPS victim liaison.

“The investigation has been completed. Unfortunately, there’s flaws. And as a person who has two family members of those nine deaths, I personally have seen that there has been, I would say, there was an exclusion of the families,” said Achneepineskum.

She is not the only one with that view.

Jonathan Rudin, counsel with Aboriginal Legal Services out of Toronto, represents the families of Jethro Anderson, Kyle Morrisseau and Jordan Wabasse. The three youth were included in a 2016 inquest that involved seven youth. The death of a fourth youth from that inquest, Curran Strang, was also reinvestigated.

The other reinvestigations were into the sudden deaths of Christine Gliddy, Shania Bob, Marie Spence, Aaron Loon and Sarah Moonias.

“From the perspective of our clients, the process has been very hard to follow. We were not communicated with very often. Despite our request for information, things were not provided. It did not go well,” said Rudin. “We did not find this process to be helpful, frankly, in pretty much any regard.”

Rudin adds that the families have not received copies of the final report.

“There’s nothing we heard so far that changes much. And I will say, we didn’t have huge expectations,” he said. But that doesn’t mean family members weren’t hopeful and haven’t been re-traumatized by the failed process.

“As a person that’s a family member and also as a person who is now representing in terms of my political role, I have not witnessed anything that would build my faith that (the Thunder Bay Police Service) is going to change,” said Achneepineskum.

There will be an Indigenous-led review of the executive governance committee and the process that was adopted in the reinvestigations carried out through Project Broken Trust, says Achneepineskum.

“They haven’t been officially announced yet as a committee. It’s still in the planning,” she said.

Rudin says he’s been “assured by a number of sources” that an Indigenous-led review committee will be going ahead.

He says he is also aware that Project Broken Trust is recommending the reinvestigation of other deaths.

Achneepineskum says she has not decided whether she will serve on the new committee but there will be a NAN representative.

“We will continue to stand with our families and continue to speak on the injustices of the system, the racism that exists within the Thunder Bay Police Service. And it’s not only with the officers, but it’s with the board as well,” she said.

Both the police service and the board have fallen under more scrutiny in the past few months.

At the request of the Attorney General, the Ontario Provincial Police announced Feb. 22 that it is conducting a criminal investigation into the actions of unnamed members of the police service.

Earlier the Solicitor General called for the Ontario Civilian Police Commission to conduct an inquiry into the police service’s leadership, including Chief Hauth and Deputy Chief Ryan Hughes.

This is on top of human rights complaints that have been filed against the police service and the board by police members alleging harassment and discrimination.

“I don’t have a lot of the details (on these other inquiries) and all I can say is that you know what? We knew these things were happening,” said Achneepineskum.

“The consistency of corruptive behaviour and racism displayed from this police service is resulting in continual human rights complaints and has been a detrimental factor in unnecessary deaths and mistreatment of members of our nations,” said Anishinabek Nation Grand Council Chief Reg Niganobe in a news release.

One of the reinvestigations dates to a death in 2000.

“It’s our position that there needs to be a serious look at whether Thunder Bay Police Service should be providing policing in Thunder Bay,” said Rudin.

He wants to see the Ontario Civilian Police Commission hold a hearing to review the continuation of the TBPS and he believes that review has to be heavy on Indigenous participation.

Until those changes happen, Achneepineskum says parents in Indigenous communities in northern Ontario will continue to be fearful about sending their children to Thunder Bay to attend high school or go to medical appointments. But they have little choice even though they have been voicing their concerns for decades.

Rudin says it is “incredibly frustrating” the lack of weight those concerns have carried.

“Our experience has been that for much of the work we do generally at Aboriginal Legal Services, when Indigenous people say, ‘This our experience,’ people listen sometimes, but they don’t really listen until it’s reflected back in an authoritative source,” said Rudin.

“Maybe we can’t say the whole Broken Trust process didn’t address change because now we can utilize that particular process to support other things,” said Achneepineskum. “It was an opportunity. So I shouldn’t say that nothing has changed. (The report) is a leverage.”