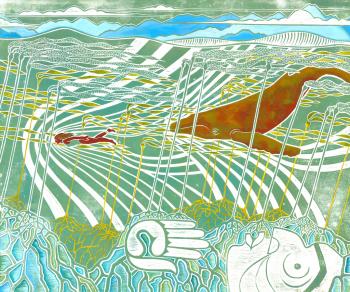 “We have the right to our own stories and our own images and we can show them in the best way.” — Denver Lynxleg
By Shari Narine
Windspeaker.com Contributor

ReMatriate, the social campaign born out of the need for “image sovereignty for Indigenous women” will be focusing on First Nations women in their relationship with water in the exhibition qaʔ yəxw - water honours us: womxn and waterways opening next week in the Bill Reid Gallery.

The multidisciplinary exhibition features video, photography, carving, printmaking, beading, and performance by nine artists affiliated with various Indigenous peoples of the Northwest Coast and the Interior of British Columbia.

“We didn’t seek out artists. We let the artists come to us. We chose from a really excellent selection of artists. We would have wanted to include more if we had more space … but we decided to keep it smaller,” said Denver Lynxleg, one of four guest curators for the exhibition.

An open call went out on social media for the submissions. Initially six artists were to be chosen but the calibre of the work pushed Lynxleg and fellow guest curators Tsēmā Igharas, Tiffany Creyke and Angela Marie Schenstead to choose nine.

The exhibition looks at how women are connected with the water as child bearers, healers, doulas, and other roles key to Indigenous matriarchal societies of the Northwest Coast.

“We’re situating ourselves within upholding the past and moving forward these conversations that are really about centring matriarch, creating space for people to interact with Indigenous people, especially our matriarchs, in different ways,” said Lynxleg, who is Anishinaabe.

The exhibition will also feature Audrey Siegl an important contemporary Water Keeper, who is an advocate and activist from the region.

“This helps to draw attention to the important work that Indigenous advocates and Water Keepers do all across Turtle Island,” said Lynxleg, noting that is one of the timely message she hopes non-Indigenous visitors take from the exhibition.

For Indigenous patrons, she hopes they see the respectful way the exhibition has been undertaken, including the use of the Musqueam language in the title, and understand that the knowledge of Indigenous peoples in the territory is being elevated.

This is the third and largest exhibition to feature the work of the ReMatriate Collective. Previous exhibitions were held at Arts Underground in Whitehorse, Yukon, and at the Morris and Helen Belkin Art Gallery at the University of British Columbia.

The ReMatriate Collective, which was formed in 2014, came together as a means for women “to be able to say we have the right to our own stories and our own images and we can show them in the best way. Take authority back of how our images can be used or set up positive reference point for people to move forward from,” said Lynxleg.

At that time, she says, designers were taking Indigenous fashions and claiming them as their own all the while presenting Indigenous women as “hyper-sexualized” and in derogatory terms.

The power given to women is represented in the name of the collective, ReMatriate which was coined by collective co-creator Jeneen Frei Njootli and is a play on the term repatriation (a non-Indigenous concept), which describes the return of cultural belongings to their rightful communities.

“In the way we chose to spell it we are putting an emphasis on Matriate as we want to draw attention to the important roles of Matriarchs in our communities,” said Lynxleg.

The collective also uses the term “womxn” in its work, spelled with an “x.”

“Used in this context our collective felt that it is more intersectional than ‘womyn’ because it includes, trans-women and non-gender binary and two-spirited individuals,” said Lynxleg. “(It) is a more inclusive, progressive term.”

qaʔ yəxw - water honours us: womxn and waterways runs from April 10 to Oct. 2 in the Bill Reid Gallery in Vancouver.