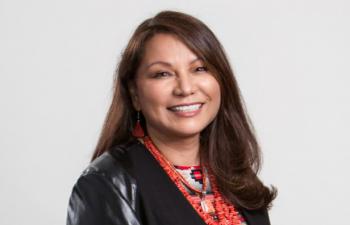 The board is “proposing now to develop the national Indigenous economic strategy for Canada instead of having the government do it as they’ve always done. We’ve said we want to hold the pen and develop our own strategy alongside the other national Indigenous economic and political organizations. I think we’re well past having somebody else do it for us,” said board vice chair Dawn Madahbee.

“I know there’s differences between the First Nations, Inuit and Metis, that we have distinct histories, and languages and cultural practises … so there’s different approaches that need to be taken to address those needs, but it was really good to see there were some common threads amongst all three and those are the four areas we’re concentrating on,” said Madahbee.

Madahbee adds that she was pleased with Indigenous Services Canada Minister Marc Miller’s commitment to set aside five per cent of his department’s budget for Indigenous business procurement. Miller made the pledge at the Assembly of First Nations Special Chiefs Assembly earlier this month. He also challenged other federal government departments to do the same.

Madahbee, who has been working on an international project with Aboriginal representatives from Australia, says that country has 2,100 Aboriginal-owned businesses who last year held $6 billion worth of contracts. Canada has 57,000 Indigenous-owned businesses, whose contracts represented “only a fraction” of that number.

While procurement commitments need to increase, Madahbee says there is reason to celebrate. She notes that the 57,000 Indigenous-owned businesses in the country are due to the strong work undertaken by the Aboriginal Financial Institutions network. She said 94 per cent of the businesses invested in by AFI were still operating after five years compared to the Canadian mainstream businesses which saw only half still in operation after the same time frame.

“Because Indigenous institutions know our clients better, we know how to help them and we help them by developing steps that they can handle. We better understand our needs,” she said, pointing out that this is why it’s important for the federal government to fund AFI appropriately.

Madahbee admits that the financial asks from the report are coming at a time of fiscal restraint by all levels of government, but she says these are necessary investments.

The Indigenous Economic Reconciliation report states that “if all opportunities were equal and the Indigenous labour force was fully mobilized, it could lead to a $27.7 billion annual contribution to the Canadian GDP.”

But it’s about more than economics, says Madahbee, who points out that NIEDB’s chair Chief Clarence Louie’s motto is “the best social program is a job.”

By creating Indigenous businesses and by developing Indigenous infrastructure in communities those jobs are created, which means less people accessing social programs.

“So the more that we can focus on economic reconciliation, the more we can have parity with Canadian mainstream in terms of jobs, business opportunities and I think that makes a real difference,” said Madahbee

The timing is also right because of the results of the federal election. With Trudeau’s Liberals forming a minority government and dependent on other parties for support, a common intersection between the Liberals, the NDP and the Greens is reconciliation with Canada’s Indigenous peoples.

The NIEDB is beginning to meet with Indigenous national organizations and Indigenous governments “to figure out the process going forward” in developing a national Indigenous economic strategy, says Madahbee, who adds they have the support of the federal government.

Along with producing the Indigenous Economic Reconciliation report, the NIEDB has had input into work undertaken by the international agency, the Organization for Economic Cooperation and Development. The OECD’s work was done in consultation with Indigenous peoples from Canada, Australia and Sweden and looked at economic indicators for Indigenous peoples in the United States, New Zealand and Mexico. The report, Linking Indigenous Communities to Development, which will be available mid-January, will contain policy recommendations for the Canadian government.

Indigenous Economic Reconciliation: Recommendations on Reconciliation and Inclusive Economic Growth for Indigenous Peoples and Canada can be read at http://www.naedb-cndea.com/reports/NIEDB%20-%20Economic%20Reconciliation%20-%20Final%20Report.pdf