Emergency Management in B.C. too slow to help First Nations impacted by floods 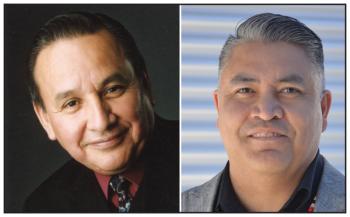 “There was no proactive action taken, there was no state of emergency declared by the provincial government on Monday. They just simply stood by and watched the event happen.” — Grand Chief Stewart Phillip, president of the Union of British Columbia Indian Chiefs
By Shari Narine
Local Journalism Initiative Reporter
Winspeaker.com

British Columbia Assembly of First Nations Regional Chief Terry Teegee says he has received assurances from the federal government that it will be committing resources and help for the 40 or so First Nations that have been impacted by the catastrophic flooding event that has impacted the province since Sunday.

First Nations in the flooded areas in the southwestern interior have either been evacuated or isolated by roads that are washed out or made impassable by overflowing rivers or mudslides.

“I immediately (made them aware of the) resources in terms of funding and the needs for some of the communities that are asking for help. The current arrangement with Emergency Management in British Columbia, which is a provincial agency, isn’t quick enough. It isn’t effective. We need a quicker way to get the resources to our communities and that’s what I’m asking for and made them aware of,” said Teegee.

While details have yet to be worked out, Teegee says helicopters or boats may be used to deliver food, water or fuel for generators.

The ministers were part of an instant response team announced yesterday by federal minister of Emergency Preparedness Bill Blair to address the emergency. Also on the team are ministers for transport, agriculture and defence.

Teegee’s discussion with Miller and Hajdu came on the same day that the Horgan government declared a state of emergency.

That declaration should have been made 48 hours earlier, says Grand Chief Stewart Phillip, president of the Union of British Columbia Indian Chiefs (UBCIC).

The UBCIC joined with the First Nations Summit and Teegee to issue a statement on Tuesday calling on the BC government to immediately declare an indefinite state of emergency.

Horgan made that declaration at noon (BC time) Wednesday. The state of emergency is in place for 14 days with the possibility of extension. Armed forces personnel have been deployed to BC to help. Initially, 300 will be deployed with up to 4,000 available.

“It should have been done Monday morning. The catastrophic flooding event and land slides happened on Sunday. By comparison in Washington State, the (United States) army engineer corps was out reinforcing dykes on Saturday. There was no proactive action taken, there was no state of emergency declared by the provincial government on Monday. They just simply stood by and watched the event happen,” said Phillip.

Thousands of people and communities in their entireties have been evacuated.

According to the First Nations Emergency Services Society website (fness-eoc.ca), which was updated today at 3 p.m. PST, nine evacuation orders have been issued along with two evacuation alerts. Twenty-six other First Nations were experiencing flooding.

On Nov. 18, an evacuation alert was issued for the Okanagan Indian Band

Evacuation orders were issued Nov. 16 for the Cowichan Tribes (portions of IR#1 and IR#9) and Sumas First Nation (IR#6). Lytton First Nation was also ordered to evacuate, impacted by both flooding and wildfire.

Neither Phillip nor Teegee are aware of details as to how many people were evacuated or how they are being taken care of.

“There was mass evacuations of First Nation communities (during the wildfires) and they were sent to various evacuation centres and there was a lot of issues with service and treatment they received at those centres,” said Phillip.

Evacuation centres are listed on the FNESS website and evacuees have been directed to register at sites in Abbottsford, Agassiz, Chilliwack, Cowichan Valley Regional District, Hope, Kamloops, Kelowna, Penticton and Salmon Arms. They can also register online.

“They were out of their homes for quite a length of time (due to the wildfires). In many ways, they just got back to their communities and now they’re being isolated with all of the major highways being (closed because of) landslides, mudslides and the washouts. There virtually isn’t any transportation routes opened and certainly not in the interior. We’re cut off from the lower mainland which is the primary source of food supplies coming into the interior. So that’s hitting communities really hard,” said Phillip.

All four highways that connect the Lower Mainland with the rest of the province have been closed off by landslides and flooding. A full list of impacted roads, both major and smaller, and bridges can be found on DriveBC (www.drivebc.ca). Rail lines have also been cut off in some places.

Being cut off has led to a shortage of food supplies and other necessities as the supply chain has been disrupted.

As to what will come after the immediate emergency, Teegee says he expects First Nations to be part of that discussion.

“Quite naturally we’d be looking to the federal government for capital infrastructure supports … (and) it’s (going to be) very, very expensive for that to happen and generally speaking nobody wants to pick up the cost for that,” said Phillip.

Teegee says the First Nations Leadership Council and the BC chiefs have the support of Assembly of First Nations Regional Chief RoseAnne Archibald and the executive to push for their inclusion in any decisions being made.

Windspeaker.com reached out to ISC to get details on the how the immediate needs of First Nations communities would be met. The ministry had not responded by deadline.