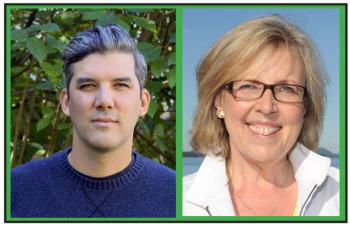 Hayden King, executive director with the Yellowhead Institute and Green Party of Canada leader Elizabeth May.

Indigenous people are pretty practical people and I don’t think those who do vote are really expecting the Green Party to form a government, especially with bad policy on Indigenous issues.” — Hayden King, executive director with the Yellowhead Institute
By Shari Narine
Windspeaker.com Contributor

With climate crisis the key issue in this federal election, according to the Green Party of Canada, Indigenous people play a critical role in finding and implementing solutions.

“When we take any kind of approach to the climate crisis we need people who are managing their lives and their land to contribute. Indigenous people are included and necessary.”

Rekmans, like everyone else running in her party with the exception of leader Elizabeth May and Paul Manly (elected in a by-election in May in Nanaimo-Ladysmith), has never sat in the House of Commons under the Green banner. This will be Rekmans’ third attempt to become a Member of Parliament from Ontario, albeit this time in a new riding.

After running twice in Algoma–Manitoulin—Kapuskasing, she is now campaigning in Leeds—Grenville—Thousand Islands and Rideau Lakes.

Although Rekmans believes she stood a better chance of being elected in her old riding where she lived for more than half her life, she decided to make the switch to the staunchly Conservative Leeds riding, where she and her husband operate a business in Kemptville.

Rekmans is Algonquin and a member of the Serpent River First Nation. According to numbers provided to her by the Green’s national campaign organizer, she is one of 17 Indigenous candidates running for the Green Party.

“What the (United Nations) has told us, told the world, we have a sustainable development goal, but there can be no action on climate crisis that isn’t based on social justice. We have to tell the truth, take the first step to take action that is meaningful,” said Rekmans.

That sustainable development goal was rammed home by Green leader May in the first leadership debate for the federal election. May squared off against Conservative leader Andrew Scheer and New Democrat leader Jagmeet Singh on Sept. 12 in the Maclean’s-CityTV hosted event that saw the noticeable absence of Liberal leader Justin Trudeau.

May said in the case of a minority government, the Greens would not throw their support behind any party unless they committed to holding global warming to under 1.5 degrees C. She said if that meant Canadians returned to the polls for another election, so be it.

Rekmans was pleased with her leader’s performance.

“She demonstrated she has a very deep understanding of the issues,” said Rekmans.

May did so, in part, by calling Scheer out on a number of Indigenous issues, including his Conservative senators blocking the passage of Bill C-262, which would have implemented the United Nations Declaration on the Rights of Indigenous Peoples fully into Canadian law, as well as accusing him of not understanding that Section 35 of the Constitution “goes almost all the way to what UNDRIP says.”

May also chided Scheer on his use of the word “communities” when referring to First Nations.

“What May had to do on Thursday night was less than she did: show up, show off a platform that extends beyond environmental issues, and prove why the Greens deserve a federal shot,” wrote Kingston.

However, Kingston did credit May for being “specific as well as impressively informed on a broad swath of topics.”

Hayden King, executive director with the Indigenous think-tank Yellowhead Institute, didn’t watch the debate, but is not surprised to hear that May presented herself well. He believes that of all the leaders, she has the strongest understanding of Indigenous issues. However, he doesn’t believe that her understanding has translated into Green Party policy.

“I think for a party that claims to want to form a government and speak on behalf of Indigenous issues … their more detailed, specific policy is frankly a mess…. They have this very descriptive and … sweeping language about ending oppression and colonialism and recognizing Indigenous sovereignty on traditional territory, which is wonderful things to say, and Elizabeth May has started to resemble Justin Trudeau in that sense. The rhetoric is really flowery and wonderful, but you … look behind the curtain and it doesn’t appear the Green Party really understands the Indigenous policy climate at all,” said King.

Rekmans says she, herself, is “struggling” with whether national Indigenous organizations will sit on a Council of Canadian Governments, which the Green Party promises to establish.

The “inclusive policy and governance body ...  will include Indigenous nations and peoples as equal partners with other levels of government in the development of shared national goals, and will be the vehicle for the revamped First Ministers’ meetings,” says the Green Party.

“We’re dealing with institutions built under colonial policy, bands created under the Indian Act. Chiefs who are elected, who create (the Assembly of First Nations), where citizens don’t vote for the national chief. These institutions aren’t working because grassroots say, ‘AFN don’t speak for me.’ The AFN doesn’t hold rights or title to territory,” said Rekmans. “So they have a place. Until I talk with Elizabeth, I can’t really tell you what that place is, because we’re still trying to figure it out.”

Rekmans does stress, though, that all negotiations have to take place on a nation-to-nation basis.

May was the only party leader this past July to attend the AFN’s annual general assembly at which time she applauded the chiefs for passing a resolution that declared climate change a climate emergency.

The Green Party has committed to supporting “Honouring Promises,” a document setting out the AFN’s priorities for the upcoming election.

The Green Party has also committed to working with the Metis National Council and Congress of Aboriginal Peoples to meet the Daniels decision “with meaningful funding and action” and “respect and work” with the Inuit through the Inuit Tapiriit Kanatami.

In unveiling her party’s 88-page platform entitled “Honest. Ethical. Caring. Leadership” on Sept. 16, May committed to fully implementing recommendations from both the Truth and Reconciliation Commission and the Murdered and Missing Indigenous Women and Girls report, and implementing UNDRIP.

The Green Party Platform can be read here: https://www.greenparty.ca/en/platform

“This is an intergenerational journey because the colonialism, oppression, and cruelty … (of) the structural violence of our current legislative system can’t be changed in a blink of an eye,” said May, adding that the onus for change fell “mostly on settler Canadians.”

King says he appreciates the Green Party’s commitment to include Indigenous peoples in a number of its strategies – such as addressing food sovereignty issues and Arctic sovereignty issues – but he’s not clear if that participation will be at the “more high-level decision-making.”

“You have a Liberal government over the past four years (that) has done arguably the most around setting up tables for dialogue around these issues. Is the Green Party going to go beyond that policy and process framework? I don’t see that in their literature,” he said.

While King believes that climate crisis is the number one issue during this federal election and that the Green Party has a “robust” climate justice platform, he doesn’t see the Greens taking away voters from the NDP, with both parties fighting it out for third place.

King thinks the Greens are positioning themselves as an issue-based party focused on climate and environment, while the NDP are clearly an ideological party aligned with labour and progressive politics, with environment as part of their platform. However, each party has seen former candidates jumping ship to the other party and both leaders have lauded the defections.

“I am not sure the Green Party has demonstrated to Indigenous people that they’re the party to manage that shift and to manage the tremendous amount of policy and legislative change that’s going to move us away from exploitive economies and the mess that got us into this place because they have never had experience.”

He said the Green Party appeals to Indigenous voters because environmental and addressing climate change are at the top of the agenda, but “Indigenous people are pretty practical people and I don’t think those who do vote are really expecting the Green Party to form a government especially with bad policy on Indigenous issues,” he said.

“I’m an Indigenous woman. I’m excited to be Green because our platform is so well thought out,” she said.

Rekmans does agree her party won’t form the next government, which was a concession May made during the leadership debate when she said the Prime Minister’s Office would be held by either Trudeau or Scheer.  That doesn’t mean people shouldn’t mark their ballots for the Greens, says Rekmans.

“A Green vote is a signal to the government that climate crisis is at the top of everybody’s list,” she said.

Rekmans is confident the Green Party can turnaround the results from 2015 where, on-reserve, Greens captured three to four per cent of the votes, down by about two per cent from the 2011 election.

The difference, she says, was that May was included in the 2011 leaders’ debate, but left out in 2015. With a limited budget for campaigning, being excluded from the national debate meant May and the Green Party were off many voters’ radar.

She also noted that Green voters decided on one-time only support for Trudeau who promised electoral reform, a promise he never delivered on.

Strategic voting also had an impact in 2015 with the ‘Anybody But Conservatives’ push that saw Trudeau gain 23 per cent more support on-reserve. He was seen as the only viable option in defeating Harper.

Where strategic voters may go this time around based on the Liberal-approved go-ahead for Trans Mountain Pipeline – which both the Greens and NDP oppose, although May has said she supports pipelines as long as they don’t carry diluted bitumen – is most likely Liberals who aren’t as pro-pipeline driven as the Conservatives.

However, Rekmans advice would be to still vote Green.  She is not a fan of strategic voting, which she says hurts smaller parties in a practical way. If the Greens garner 10 per cent of the vote in a riding, she points out, the party is eligible to have 60 per cent of their campaign expenses reimbursed.

“It would give the party a better funding base for the next election. That’s how parties are built,” she said.