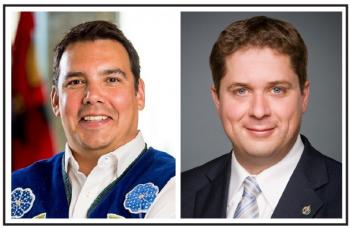 Niigaan Sinclair, a professor at University of Manitoba, and Conservative Party of Canada leader Andrew Scheer.

“The only way you’re invested in the Conservative Party agenda is if you own a business or own a farm or if you own some kind of privileged space in society, and Indigenous peoples just don’t in many of those categories.” —Niigaan Sinclair, professor, Native Studies, University of Manitoba
By Shari Narine
Windspeaker.com Contributor

Conservative MP Cathy McLeod says the relationship with Indigenous peoples is a priority for her party.

“We have an important responsibility. We need to engage, we need to rebuild relationships and we need to make sure we’re doing things that make a real difference in peoples’ lives,” said McLeod, who serves as her party’s Shadow Cabinet Minister for Crown-Indigenous Relations and Indigenous Services.

Rebuilding those relationships, though, is going to be an uphill battle.

Not only did the Harper Conservatives fare poorly in the 2015 election, getting the least amount of on-reserve support among the four major parties, but their new leader Andrew Scheer was booed when he appeared in front of chiefs at the Assembly of First Nations in December 2018.

Scheer was asked at the assembly how he was different from defeated Prime Minister Stephen Harper. He told chiefs to wait until the Conservatives party platform was released. His reply was met with boos.

Nine months later, if the response from Treaty 6 chiefs during the Maclean’s/CityTV debate on Sept. 12 is any indication, there hasn’t been much movement.

However, the strongest criticism came from Treaty 6 Grand Chief Wilton Littlechild, who from 1988 to 1993 served as Member of Parliament for the Progressive Conservatives under Brian Mulroney.

“I’m very unimpressed with Mr. Scheer continuing to misrepresent what the (United Nations) Declaration (on the Rights of Indigenous Peoples) means,” said Littlechild, who was instrumental in the creation of that declaration.

The Conservatives in the Senate killed the private member’s bill, C-262, which was introduced by NPD MP Romeo Saganash to bring Canadian laws in line with UNDRIP.

“There are many laudable goals within this piece of legislation, many things that a Conservative government would support, that I would support as Prime Minister, but we cannot create a system in this country where one group of individuals, one Indigenous community, can hold hostage large projects that employ so many Indigenous Canadians,” said Scheer during the debate.

Grand Chief Arlen Dumas of the Assembly of Manitoba Chiefs admonished Scheer on his choice of words.

“It is incredibly disappointing that one of the party leaders who wants to represent Canada holds this discriminatory view and outlook of UNDRIP and of First Nations people. Citizens of this country should be very wary of supporting any party candidate who does not respect and understand the sovereign and Treaty rights of First Nations people in Manitoba or Canada,” said Dumas in a statement.

Niigaan Sinclair, a professor in Native Studies at the University of Manitoba, goes even further.

“All it takes is that one statement, a group of people holding the rest of the country hostage, and invoking the idea of terrorism, because (Scheer) lumps all brown people into this idea of terrorism, because they won’t acquiesce to the control he wants to put forward. The idea that Indigenous people will never speak for themselves, he will speak for them, is really within that phrase,” said Sinclair.

While McLeod steers clear of commenting on Scheer’s language, she does say that Indigenous people in her riding of Kamloops-Thompson-Cariboo (Indigenous people comprise 11.8 per cent of her riding’s population) anticipate community benefits from the Trans Mountain Pipeline expansion.

“It’s very tough for them to see these opportunities and not be able to move forward,” she said.

The Conservatives support the expansion of Trans Mountain Pipeline and other major projects.

Indeed, a number of the chiefs who formed the focus group for the debate, also support the Trans Mountain Pipeline proposing majority Indigenous-ownership of the line. However, that shared interest was not enough to garner support for Scheer.

As for Bill C-262, McLeod says support was not given by her party because Saganash, Crown-Indigenous Relations Minister Carolyn Bennett and legal opinions did not provide a “common definition of what free, prior and informed consent means” and as a private member’s bill there was “limit(ed) opportunity to scrutinize it.”

The Conservatives killed another NDP private member’s bill, this one in committee. It called for a national Indigenous day. McLeod says while “reconciliation is important”, the bill focused on giving federal employees the day off, wasting money that could have been better spent on improving education and food security.

McLeod also points out that Bill S-3, which, among other things, did away with sex-based inequities under the Indian Act, was not supported by the Conservatives as it “was a terrible mess, so we obviously held them to account when they didn’t do their jobs.”

McLeod highlights work she undertook as a member of the Indigenous and Northern Affairs committee. When forest fires in 2017 spread across the country and ravaged First Nations communities, she made a motion to study the challenges facing the First Nations, including coordinating emergency responses with federal and provincial governments. Consensus recommendations went to the government.

McLeod says the Conservatives went along with legislation “when we believed that the government was on the right track … (and we) just tried to make improvements as we went along.” Legislation given the nod by her party included Bill C-91, which supported the reclamation, revitalization, maintaining and strengthening of Indigenous languages, and Bill C-92, which affirmed the rights of First Nations, Inuit and Métis to exercise jurisdiction over child and family services.

Scheer, however, was unclear during the debate on whether the Conservatives’ support for First Nations children would extend to not appealing the latest decision by the Canadian Human Rights Tribunal, which could see as much as $2 billion paid out to children who were harmed by the on-reserve child welfare system.

Unlike May and Singh who unequivocally said they would fully implement the CHRT’s decision, Scheer said, “We will of course abide by court decisions and see the types of impacts it has on our abilities to provide those programs but of course we will be there as a willing partner.”

Sinclair says Scheer’s performance in the debate underscored his lack of understanding of the Indigenous agenda.

He adds that the Conservative Party hasn’t been the party of choice for Indigenous voters since the mid-1980s when Joe Clark, as minister in the Mulroney Cabinet, demonstrated social responsibility with his work overseas.

The Conservative platform, including the one page dedicated to working with Indigenous communities in “A real plan to protect our environment”, provides a “simplistic approach in relation to Indigenous people,” says Sinclair.

Sinclair is further critical of the Conservatives’ climate change plan which, he says, “wars against the carbon tax … (but) offers zero in reaction. All they’ve said is that we are going to kick and scream if you impose the carbon tax on us, but the default position of that is that the earth goes completely to waste. There is no palatable or doable agenda from the Conservative point-of-view.”

Sinclair believes that Canadians are willing to give up a “little bit of money,” understanding that climate change is a concern.

McLeod sees “A real plan to protect our environment” differently.

“I really like our plan … Not only are we talking about climate change, but we’re talking about a more general plan that recognizes an environmental plan needs to be comprehensive and needs to be about our waterways and many other components,” she said.

Sinclair says Scheer has done little to convince Indigenous voters that they are a priority.

“What you see (from Scheer) is a complete ignorance of Indigenous communities. I think there would be a bit of an interest from him, but he realizes his energy would be best served elsewhere. He’s still in the process of rebuilding that party,” said Sinclair.

He points out that while Harper had limited support from Indigenous voters, he did cultivate relationships where he thought they would be beneficial. In Alberta, Harper was named an honourary chief by the Blood Tribe. Scheer hasn’t made these connections.

There will be little support from on-reserve ridings for Conservatives, says Sinclair.

However, in rural ridings in Saskatchewan, Manitoba and Alberta which include reserves, Sinclair expects Indigenous voters to be largely outnumbered by non-Indigenous voters and those ridings to go Conservative.

“But I think where you see some interesting trends are in cities, urban spaces where Indigenous people make a large segment of the population,” he said. “You see battles generally between the NDP and Liberals in those ridings.”

Sinclair points to Winnipeg-Centre and Winnipeg-North, both of which are held by Liberals. In Winnipeg-Centre, Robert-Falcon Ouellette handily defeated his closest rival, the NPD incumbent. However, in Winnipeg-North Kevin Lamoureux defeated his closest contender by almost 20,000 votes and that was a Conservative. For both those ridings in 2019 the NDP have Indigenous candidates running.

The Conservatives have only five Indigenous candidates, including Leona Aglukkaq, who lost her Nunavut seat in 2015 after being in office for two terms. She held two Cabinet postings over that time.