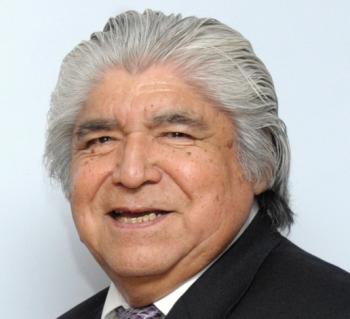 “We exist in our rural part of the world and telecommunications development gaps need to be addressed, but a strong foundation of agreements and negotiation allow us to address these challenges through partnership and innovation.” — Dr. Ted Moses
By Sam Laskaris
Local Journalism Initiative Reporter
Windspeaker.com

Dr. Ted Moses has been, and continues to be, a huge telecommunications advocate for Eeyou Istchee, the Cree territory in Quebec that covers an area of almost 400,000 square kilometres, roughly the same size as the state of California.

The two-day event held June 2 and June 3 was organized by Clear Sky Connections, Canada’s largest Indigenous-owned telecommunications network. The theme of the conference was Digital Sovereignty. Moses’ presentation was titled The Art of Negotiating: Moving Beyond Symbolism.

Moses explained what it means to move beyond symbolism in negotiations.

“It is an understanding that we implement. We seek the tools to implement agreements and bring benefit to the territory to make sure people have the tools to participate in the modern economy and to make sure communication tools protect, promote and preserve our culture,” he said.

Moses is the president of the Secretariat to the Cree Nation Economic Alliance.

The mission of this secretariat is to promote relations and socio-economic alliances between Eeyou Istchee and the Jamesie, Abitibi-Temiscamingue and Nunavik regions.

Moses said in order to understand how telecommunications have developed in Eeyou Istchee, it’s important to have a grasp of agreements in the region. That includes the 1975 James Bay and Northern Quebec Agreement and the Paix des Braves Agreement from 2002.

“Both set out broad provisions establishing pre-control over how justice, education, economic development, etc. are implemented in the territory,” Moses said.

“There has been a trend to implement the organizational powers supported by the James Bay and Northern Quebec Agreement and to expand upon them. This escalating trend to self-governance and greater autonomy creates a strong impetus for telecom development.”

“We have the ability to create laws. We carry the responsibility to maintain many aspects of public safety. We have an increasing economy and the right to self-determination,” he said. “Every effort of ours requires connectivity and the ability to communicate with our people.”

The world now thrives on connectivity, he said.

“Progress and innovation have continued at a quicker pace,” said Moses. “We expect content to be available in a digital format. We exist in our rural part of the world and telecommunications development gaps need to be addressed, but a strong foundation of agreements and negotiation allow us to address these challenges through partnership and innovation.”

Moses believes it’s important to understand what Eeyou Istchee has done over the years to connect with its people.

“We have a long history of broadcasting news with two-way Bush radios providing security on the land,” he said. “The first radio station being established in the 1980s.”

Also, the Eeyou Communications Network (ECN) was established in 2004.

Moses said while ECN organizations were rooted in radio, they currently provide numerous other services.

“They carry the mandate to expand into all domains of multimedia whether that be video, web or whatever is come,” Moses said. “The wide availability of connectivity offers substantial opportunity to provide entertainment, news and public information for our people in their own language.”

Moses believes having broadcasts available in Cree is significant.

“This is an acknowledgment that the maintenance of language and culture requires representation within the media space,” he said. “There is also a great growing public service announcement need.”

Moses added his territory will not rest on its laurels.

“The foundation of agreements that exist within Eeyou Istchee forms a strong basis that continues the development of Eeyou Istchee and leverage the opportunities afforded to us through telecom,” he said. “We are actively taking inventory, creating road maps for development and plans to participate in the regulatory and policy direction of telecommunications.”

Residents of the territory should also be doing their part.

“Participatory connectivity is a commitment that all people of Eeyou Istchee should be able to access and know how to use technology,” Moses said. “We maintain commitment towards many of these ensuring that all development keeps them safe and that communities can leverage the benefits of modern technology.”