Easy-peasy AFN charter changes done; get ready for battles on the rest 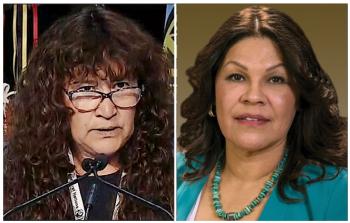 “If there’s going to be any changes we don’t want to leave it too close to an election, because it’s too political.” —Bonnie Leonard
By Shari Narine
Windspeaker.com Contributor

Discussions about amendments to the Assembly of First Nations charter promise to get intense as the renewal process continues into 2020 at the July and December chiefs’ assemblies.

The first round of changes were made on Dec. 3 at the Special Chiefs Assembly in Ottawa. They were what Alberta Regional Chief Marlene Poitras called “the easy-peasy stuff” as they involved straightforward procedural changes.

What’s to come won’t be as straightforward.

“What we’ve been hearing across the country (is that) it’s time that some changes are made so that the Assembly of First Nations can accommodate the nations that are going into nation building (and) assuming their jurisdiction and authority across the country,” said Poitras, who is chair of the chiefs’ committee for charter renewal.

The AFN charter was introduced in 1985 and amended in 2003. Attempts to amend it more fully in 2005 were not accepted by the chiefs who felt they were not part of the process, said Poitras.

The term “First Nation” is not defined in the charter, but in practise it has come to mean Indian Act bands and chiefs, said Bonnie Leonard, legal counsel for the AFN and advisor for the charter renewal committee. This definition leaves no space for bands that are engaging in self-government agreements, modern treaties or those exercising their rights in inherent jurisdiction.

“We need to look at the definition and change the term ‘First Nation’ perhaps within the charter to be more reflective of today’s political atmosphere,” said Leonard.

Other more complicated issues that need to be addressed include accountability provisions; the number and structure of regions; a “clear and precise” mandate for the AFN; improved reporting by regional chiefs to the regions; the roles of provincial and territorial organizations and tribal councils; the role of traditional hereditary leaders; recognition of veterans in the charter; and terms of quorum.

Leonard also pointed out that concerns had been voiced about the process of resolutions at the assembly. While that is not a charter renewal issue, she said the rules and guidelines for resolutions will be amended.

The chiefs dealt easily and quickly with the procedural resolutions put in front of them on Tuesday, which addressed executive committee portfolios, chiefs’ committees, and oaths of office for both the national chief and regional chiefs.

While the first batch of charter renewal resolutions passed easily, that didn’t mean concerns were not voiced from the floor of the assembly.

Poitras said the charter renewal committee consisted of 10 chiefs from across the country and three meetings had been held.

Kainai Blood Tribe Chief Roy Fox took exception to his tribe being represented by someone he had no say in selecting. Fox pointed out that his tribe had 13,000 members and was part of the Blackfoot Confederacy which had 45,000 members.

“I have not been involved in the work that has been done. I understand that someone is representing my tribe that I have no idea how that selection was made and so … we have to remember that one of the initial reasons why we went from the National Indian Brotherhood to the AFN was that the power would come from the bottom up …

“The read I got here, there hasn’t been very much consultation and I do believe, I know the regional chief that’s leading this, she’s got people doing the work but, for the benefit of her, I’d advise … more consultation on the ground,” he said.

Leonard urged chiefs to review the charter and let the committee know the changes they wanted to see.

She noted the work in the next few months would focus on analyzing the Confederacy of Nations, which has the role of keeping the AFN accountable between annual assemblies; the executive committee articles; clarifying language around quorum; the roles and responsibilities of the national chief; election terms; and the definition of First Nations.

“If there’s going to be any changes we don’t want to leave it too close to an election, because it’s too political,” she said.

Leonard also reminded chiefs that amendments to the charter could be revisited at any time and new amendments made once the 60-day notice was given.