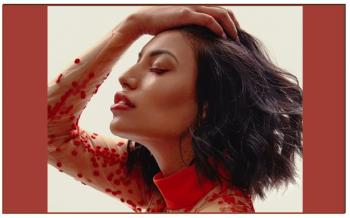 Ashley Callingbull received criticism for a photo she posted on social media of a dress designed by Lesley Hampton for an event dedicated to missing and murdered Indigenous women and girls during Toronto Fashion Week in 2019.

“There should be room for all our kin, and that includes our relations who might be perceived as not adhering to another person’s idea of what is ‘traditional’ or ‘appropriate’.” — Tłaliłila’ogwa (Sarah Hunt)
By David P. Ball
Local Journalism Initiative Reporter
Windspeaker.com

A two-year-old photo shoot with a Cree model wearing an Anishinaabe designer’s dress that was dedicated to missing and murdered Indigenous women and girls (MMIWG) has ignited pain and trauma, and raised thorny questions for Indigenous women’s advocates.

The images were posted to social media last week by Enoch Cree Nation member Ashley Callingbull. They were from a 2019 Toronto Fashion Week shoot. Anishinaabe designer Lesley Hampton, a member of Temagami First Nation, said she hoped to send a strong message about MMIWG.

Both the model and the designer, who also advocate on Indigenous women's issues, have apologized to families who called the images disrespectful. Some of the critics said whatever good intentions were behind the photo shoot or the dress design — which featured hundreds of red dots on a sheer fabric — it only triggered more trauma for them.

One of those was Deborah Green, who said the incident isn’t just about a dress, a pose, the fashion model or designer, but about larger and ongoing issues at play in the MMIWG movement. For her, it raises troubling questions about who speaks about one of the most traumatizing, ongoing injustices against Indigenous women — and how.

“There’s been a lot of triggering and trauma caused by people not engaging us families,” Green, of Kawacatoose First Nation in Saskatchewan, told Windspeaker.com. “My sister is more than just a symbolic dot on a dress. It was offensive to me.”

Green’s sister Laney Ewenin — who was murdered in Calgary in 1982 — is among the thousands of missing and murdered Indigenous women and girls in Canada. She said it’s essential that anyone wanting to speak out on the issue consult with MMIWG families before circulating art or imagery publicly. She is demanding Callingbull and Hampton delete the images and posts out of respect.

“The big thing with our movement is 'families first’,” Green said. “There's nobody better to advise and counsel on how to honour the people and forward the cause than the families who have been impacted.

“This story is a prime example of the consequences of not doing that.”

Both Hampton and Callingbull apologized for the hurt sparked by the photos, which remained on both of their social media accounts at time of publication.

“I apologize, and have said sorry to numerous families that this photo has triggered them so deeply,” Callingbull told Windspeaker.com in an interview. “I completely understand that they were triggered.

“I meant no ill-will. I did not want to hurt anyone or bring up traumas, or do this in a bad way.”

Asked about criticisms that she didn’t get approval from families of missing or murdered Indigenous women and girls before modeling the dress, Callingbull said it’s an unfair assumption that she is unaffected by the MMIWG crisis.

“I’m actually also one of those families,” she said. “I myself have lost family members and friends who never came home. And I do consult other families, too.

“Other MMIWG families I’ve spoken to said they loved it.”

Callingbull has built a successful modeling and acting career, appearing in the show Blackstone and in 2015 becoming the first Indigenous woman from Canada to win the Mrs. Universe competition.

She and Hampton have spoken out extensively on MMIWG issues. Hampton’s Twitter biography summarizes her work as “focused on mental health awareness, body positivity, and authentic Indigenous representation.”

Callingbull’s dress post was preceded by numerous previous ones expressing outrage at violence against Indigenous women, including one on Feb. 18 where she cited numerous crime statistics and called MMIWG a “systemic and a national crisis that requires urgent, informed and collaborative action.” The text was below a photograph of her with a handprint across her mouth.

On Wednesday, Callingbull replied to commenters on her official Facebook page apologizing to those who were hurt or triggered by the dress. One commenter explained the dress triggered many missing women’s loved ones because it appeared to “glamourize” the issue.

“This dress has been triggering (for) many,” the person wrote on Facebook. “We see blood splatter which is a trigger. We also feel that it is not right to glamourize our MMIWG … I am sure you meant no ill will.”

Callingbull replied to the post. “I’m so sorry that’s what you see. This post didn’t mean to be hurtful or offend anyone.”

According to Tłaliłila’ogwa (Sarah Hunt), a Kwakwaka’wakw Nation associate professor at the University of Victoria and a Canada Research Chair, the whole incident points to deep hurt, trauma and contradictory stereotypes and expectations of Indigenous women.

“My heart really goes out to everyone involved with this,” said Hunt, the author of the upcoming book Decolonizing Rape Culture. “There needs to be an understanding that MMIW means individuals. We’re talking about thousands of women’s lives, and we’re talking about people’s loved ones.

“The families of those people have the right to determine how stories about their loved ones are told.”

At the same time, Hunt said, the controversy that has arisen over the dress is an example of the vast diversity and differences among MMIWG advocates. There is a risk, she warned, if it’s assumed there must be only one way for Indigenous women to be involved in the cause.

“A lot of MMIW awareness work is happening right now,” Hunt said. “We have to be careful that we have a diversity of images in it; that we’re not trying to police each other.

“There should be room for all our kin, and that includes our relations who might be perceived as not adhering to another person’s idea of what is ‘traditional’ or ‘appropriate’.”

Callingbull’s post also drew attention to misogyny and the lateral violence Indigenous women experience from fellow Indigenous men, with one saying wearing such a dress might cause her disappearance.

A male band council candidate in Muskeg Lake Cree Nation wrote on Callingbull’s Facebook post “Keep wearing stuff like that you'll go missing lol jk.” (He later wrote after facing a cyclone of criticism, “Come on enough it was a joke,” followed by, “I regret my comments.”)

Many people criticized his remark, with some saying it is illustrative of the widespread sexism Indigenous women have experienced in First Nations politics and organizations.

“It’s misogyny, which is the hatred of, contempt for, or prejudice against women or girls,” wrote a Regina artist. “Our women should always be allowed to wear or dress however they want.

“That should be our right. Men shouldn’t be allowed to tell us these things.”

She also defended Callingbull and Hampton’s fashion shoot, calling the photographs “a solemn image — one of how we want all our sisters, mothers and daughters to be. Strong, fierce and proud.”

Green did not see the dress that way, no matter what was intended. She sees the problem as deeply rooted in colonialism and its particular attacks on Indigenous women from the beginning, and said "posing provocatively" in the name of the MMIWG cause "opens the door for predators, as we saw by that man's post," she said. Green added that colonization marginalized Indigenous women by sexualizing them, making them more vulnerable and seen as "disposable" to predators.

"So anything that sexualizes this cause is a big no-no," she said.

Callingbull insisted she was posing neither provocatively nor sexually, but that it was a “classy” fashion shoot for a project that made no money, did not pay her, and the dress she modeled was never even sold. Hampton only made one version.

“Me and Lesley both thought in our hearts it was a beautiful way of bringing representation into the world through art,” she told Windspeaker.com. “It’s not being sexualized in any way.

“People saying I deserve those sexualized comments — or that man’s comment — because of the way I look is basically victim blaming. People are projecting their traumas onto me.”

Hunt said the controversy raises questions about what is known as the “politics of respectability,” an internal policing that can happen in social movements to conform with mainstream, “acceptable” standards of behaviour or lifestyle.

She explained the concept in this context as the idea that if you “don’t adhere to these respectable standards, you’re to blame” for violence.

“All of us have the right to be free from violence,” Hunt said. “It doesn’t matter what we wear, or what we choose to do.”

To her as an Indigenous woman, MMIWG work is about two key goals. The first is to honour and remember women who have disappeared or died. But there’s another important aim.

“The other side of that is asserting the agency that each of us has to live free of violence,” she said. “That’s what I think of when I see this dress. It’s a celebration of strength, of being able to reclaim your body.

“As Indigenous people, we’re all working in different ways towards the same thing: ending violence towards our loved ones. We have different ways of approaching it.”