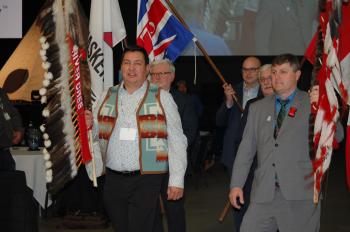 “I want to again stress here, renewables will be eligible for the AIOC.” —Minister Rick Wilson, Indigenous Relations.
By Shari Narine
Windspeaker.com Contributor

“This government has taken some very bold steps to ensure that Albertans get back to work and that there is some… development amongst Indigenous communities in their role in growing the Alberta economy,” Lonechild told delegates at the fifth annual Indigenous Green Energy Forum held at Enoch Cree Nation Nov. 20.

Alberta Indigenous Relations Minister Rick Wilson spoke to the gathering about the AIOC, which has $1 billion available to backstop loans for mid-to-large-scale natural resource development projects.

“I want to again stress here, renewables will be eligible for the AIOC,” said Wilson.

While the AOIC will focus on the larger projects, Wilson said funding will be available through his department and the Technology Innovation and Emissions Reduction (TIER) system to fund smaller clean energy projects.

TIER legislation was recently tabled by the province. It is the centrepiece of the provincial government’s climate strategy. TIER would apply to facilities that emit more than 100,000 tonnes of greenhouse gases in 2016, or a subsequent year. They will have to reduce emissions by 10 per cent in 2020, and then by an additional one per cent each year after 2020.

Those that cannot meet the province’s emission reduction requirements can either buy emission offsets or pay $30 per tonne of carbon dioxide into the TIER fund. This money will support innovative and cleaner Alberta-based technologies.

The Alberta Indigenous Opportunities Corporations provides $6 million for capacity building, beyond the $1 billion loan backstop. The smaller projects will go through TIER because the province doesn’t want them eating into that AIOC capacity-building fund.

“A minimum project scale will be set, looking towards medium-to-large scale projects, likely falling in the tens of millions of dollars, to ensure economic returns to communities are material.”

Wilson said these “game-changing projects” would provide revenue to communities, allowing them to increase employment opportunities, build skills, and prioritize their financial and social needs.

Lonechild is on board with the AIOC being used for the larger projects.

“They’re looking at projects that will create a return, rates of employment. So some of these major projects are what they’re targeting,” he said.

Larger clean energy projects such as windfarms, geothermal and biomass, he adds, are possible for Alberta First Nations.

“Indigenous people have had these projects in the back of their minds. They’ve been approached by industry players, but haven’t had the ability to participate,” said Lonechild.

However, lack of capital and expertise are not the only reasons First Nations have been left out when it comes to major clean energy projects.

There are also infrastructure issues, Lonechild says, which neither federal nor provincial governments have moved on. He is optimistic that governments can be encouraged to come through with those commitments in light of the need for clean energy development.

Lonechild would like to see the First Nations Power Authority play a role in the AOIC.

“In order for us to be a mainstay in Alberta, we need to be able to tie into what they’re doing with the Alberta Indigenous Opportunities Corporation. Maybe we can offer some expertise to that renewable energy discussion,” he said.

Lonechild says the power authority has been invited to make presentations in the north and will be going to Yukon in April, having been invited by Yukon First Nations.

The power authority “de-risks” electricity projects, working with communities to develop capacity and knowledge, helping them build awareness of what they’re getting into when it comes to technology and scale of the project. The First Nations Power Authority will then match the community with a proven development industry partner with the intent to build equity participation.

“Once that long-term business relationship is well established, we end up exiting the conversation,” said Lonechild.

Minister Wilson said the AOIC will be run by a competency board. He said a short list of members, which includes a “good cross section of Indigenous ladies and men,” has gone to Premier Jason Kenney’s office and Wilson is hoping to make an announcement soon.

The AIOC is open to Indigenous groups outside of Alberta although preference will be given to projects that benefit Alberta.