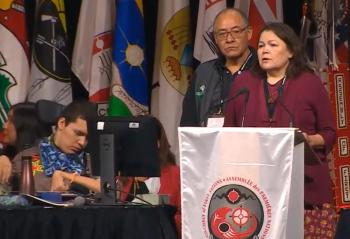 Representative plaintiff White Rock (Noah) Buffalo-Jackson, his father Richard Jackson and mother Carolyn Buffalo appeared at the Assembly of First Nations annual general meeting where they explained their involvement in the class action on discrimination in the First Nation child and family services system.

“AFN has been very clear (to the government): You need to get this right. You will cause trauma…so we need to make sure to get this right.” — Diane Corbiere, legal counsel for the AFN
By Shari Narine
Local Journalism Initiative Reporter
Windspeaker.com

A historic agreement that will help First Nations children and their caregivers wronged by the federal child welfare system would have gone nowhere had it not been for its representative plaintiffs.

“My life has a purpose. I knew it had a purpose before this case. But this is my life’s purpose, to advocate for our people,” said Karen Osachoff.

Osachoff was joined by her sister Melissa Walterson and the four other representative plaintiffs for the Assembly of First Nations annual general assembly in Vancouver where they were blanketed July 6.

On June 30, the federal government, AFN and the Moushoom/Trout class action parties reached a final settlement agreement on $20 billion to compensate First Nations children and families who experienced discrimination under the First Nations Child and Family Services program and Jordan’s Principle.

The final settlement agreement was the result of six months of negotiations after the AFN, Canada and plaintiffs in two-class action cases reached an agreement-in-principle in December 2021. Along with the $20 billion in compensation, there is an additional $19.807 billion for long-term reform of the child and family service program.

Manitoba Regional Chief Cindy Woodhouse was tasked with leading the final negotiations for the AFN.

“I advocated very hard to address the concerns,” said Woodhouse. “I believe you will see the efforts made to avoid the mistakes of previous compensation processes reflected in the final settlement agreement.”

“AFN has been very clear (to the government): you need to get this right. You will cause trauma…so we need to make sure to get this right,” said Diane Corbiere, outside legal counsel for the AFN.

Those concerns were from lessons hard learned through other settlement agreements, including Indian residential school and day schools.

“(This) will not require any claimant to testify in court,” said Woodhouse.

Claimants will receive culturally appropriate mental wellness supports as they go through the entire compensation process, and financial counselling, if they so choose, on how to manage the money received, including saving and investing.

Claimants will also have the option to not receive their payment in a single lump sum.

The claim deadline is up to three years after a child becomes an adult and longer for those who may be incarcerated, ill or homeless.

Woodhouse said this represented an approximately 20-year commitment from Canada.

Funding for supports, including legal and administrative fees, are over and above the $20 billion settlement.

Woodhouse also noted that $50 million has been earmarked for the creation of a foundation to offer support to claimants who don’t receive direct compensation. The foundation will be informed by youth with lived experience in the child welfare system and will be led by the youth. Among its responsibilities, it will help connect children with their biological families and communities and cover travel and accommodation costs.

Corbiere said that for the AFN’s representative plaintiffs, “this is traumatic work.”

Osachoff, 43, was adopted to a non-Indigenous family when she was three years old as part of the Sixties Scoop. She left that home at 11 years of age and was homeless living on the streets. She was in and out of the system until she was 18 years of age.

Walterson, 45, was adopted at birth by a non-Indigenous family. She was raised in a white community and attended a white school and “learned my so-called place in the world at a very early age.”

In December 2019, Walterson attended the AFN Special Chiefs Assembly. In talking to the chief of Pasqua First Nation, she learned she had several brothers and sisters who had passed away. But the chief also gave her the phone number of her sister, Osachoff. The two met for the first time in 2021.

Ashley Dawn Louise Bach, another representative plaintiff, was apprehended at birth, taken immediately from the hospital. She was raised in a non-Indigenous home and had more than 40 foster siblings. When she turned 18, she left.

White Rock (Noah) Buffalo-Jackson, now 20, is confined to a wheelchair. His parents, Carolyn Buffalo and Richard Jackson, are representative plaintiffs for the Jordan’s Principle class.

“Our story is long and we’ve been through so much and we have had to fight the government,” said Carolyn Buffalo, former chief of the Montana First Nation.

That story includes fighting to access funding for busing for Noah to attend school.

“Doing this has been a lot of work. It’s been difficult and it has not been easy,” said Buffalo, who added that all their actions have been guided by Noah.

Claims for compensation will not be accepted until early next year as there are still legal steps to be undertaken in 2022.

Approval will be sought from the Canadian Human Rights Tribunal in late July or early August. The CHRT must say that it is satisfied that its compensation order has been fulfilled. Negotiations between the parties was as a result of the CHRT’s compensation order issued in 2019.

It is hoped, said Corbiere, that the CHRT will give its approval in time for the parties’ September appearance in federal court for approval of the final settlement agreement.

In December, the parties will return to the federal court to seek approval for the distribution protocol.

Canada has agreed that the AFN and Moushoom will develop the compensation allocation structure. This will include a base payment of $40,000 to all claimants with the possibility of an additional enhancement payment, to be tied to specific objective factors.

At this point, legal counsel is developing the qualifications for the Jordan’s Principle distribution protocol in consultation with Jordan’s Principle experts. Someone who is approved in this class will receive a minimum of $40,000 in compensation if they meet specific criteria.

The court will appoint someone recommended by AFN and Moushoom to administer the entire claims process.

This agreement only pertains to individuals who were discriminated against by the federal government. It does not include children who were apprehended by provincial, territorial or municipal agencies.

However, another class action was certified in mid-June by the federal court for Indigenous children in foster care off-reserve.

Information on the final settlement agreement and updates can be found at fnchildcompensation.ca.