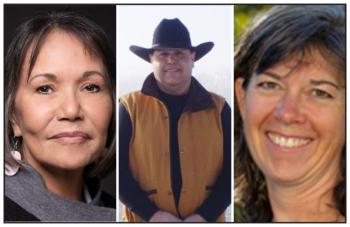 “Why did (manyguns) not follow protocol, get a hold of the Elders who developed this bundle and talk to them first? And we would have said, ‘No, you can’t destroy that. Are you out of your flippin’ mind? … At least that’s what I would have told her.” —knowledge keeper Harley Bastien
By Shari Narine
Local Journalism Initiative Reporter
Windspeaker.com

“Even though it’s an Indigenous person who destroyed this bundle, it still doesn’t relieve the onus on MRU management not to address this and not to make it public (and) to say, ‘We destroyed this bundle because our Indigenous person here that we hired originally claimed she had nightmares about it and after a few months came back and said she destroyed it because she said it was fake.’ MRU has got to answer for this,” said Bastien.

Last April in Banff, the knowledge bundle was transferred in a ceremony to dr. linda manyguns in her role as associate vice-president of Indigenization and decolonization at MRU in Calgary. manyguns is Blackfoot, born on the Tsuut'ina Nation and registered at Siksika. She was hired in 2021.

Work on the bundle began in 2016, led by Bastien, Peter Weasel Moccasin and Raymond ManyBears. For three years, knowledge keepers from different Treaty 7 communities worked on the bundle. They had been approached by MRU in response to the Calls to Action from the Truth and Reconciliation Commission on the legacy of Indian residential schools.

“Eventually all the ideas that were put forward by the huge amount of Indigenous people who were invited by MRU, we came down to, I believe it was, nine main points. These main points…were written down on paper and again, keeping with our custom, they were included into a parfleche (rawhide container), which was wrapped up in a blanket,” said Bastien.

With the coronavirus pandemic hitting in early 2020, the transfer ceremony of the bundle to MRU was delayed until 2022.

Bastien, who has had a 10-year relationship with MRU in various capacities, was shocked when he found out last August that manyguns had destroyed the bundle.

MRU biology professor Carol Armstrong was surprised to find out that Bastien was unaware.

Armstrong, a settler faculty member, had attended the bundle transfer ceremony. She also sits on a faculty committee, which includes manyguns, and which is tasked with decolonizing and Indigenizing the university.

It was during those committee meetings, says Armstrong, that manyguns shared she had been having bad dreams since accepting the bundle and that she had consulted her Elders who recommended destroying the bundle. manyguns invited some of the committee members to be present when the bundle was destroyed at Siksika Nation at the end of the Sundance in July. Armstrong was not in attendance.

A month later, Armstrong took a group of students, as part of the biology course “Ground and Learning from the Land,” to Bastien’s educational tipi camp, Buffalo Rock, on the Piikani Nation. Bastien had helped create the course. The destruction of the bundle came up in conversation.

“I was surprised he didn’t know and that really kick started this whole thing about open conversation and respectful conversation that just, for whatever reason, is not happening,” said Armstrong.

Bastien asked Armstrong to help him set up a meeting with manyguns.

Armstrong approached Vice Provost Jennifer Petit, who had also attended the transfer ceremony and is, according to Armstrong, a “solid supporter of change on campus and an advocate for decolonization,” to participate in a virtual meeting with manyguns. They asked manyguns to speak with the knowledge keepers.

Armstrong said at that Oct. 11 meeting manyguns “was adamant that she would not be having a conversation or meeting with anyone…. She called the knowledge bundle ‘an unacceptable mimic.’… She was dismissive of it as anything of importance.”

It was a change in attitude, says Armstrong, who holds that initially manyguns had made it clear that the “bundle drives our decision-making and not the other way around.”

“I don’t know what happened between those early meetings and her decision to destroy it,” said Armstrong. “But it seems that a conversation about that decision with those who contributed their knowledge is important.”

With manyguns not committing to that discussion, Armstrong hand-delivered a letter in mid-November to MRU president Tim Rahilly and provost and academic vice-president Elizabeth Evans. The letter was on behalf of Bastien and a number of other knowledge keepers asking for a meeting. That has yet to happen.

In the most recent email response received by Armstrong on Jan. 11, Evans said she was “in the midst of a major project for the University which currently restricts my time.”

Bastien remains puzzled by both manyguns’ actions and the lack of response from MRU leadership.

While a knowledge bundle is neither holy nor spiritual, it is still in keeping with customs, he says.

“Why did (manyguns) not follow protocol, get a hold of the Elders who developed this bundle and talk to them first? And we would have said, ‘No, you can’t destroy that. Are you out of your flippin’ mind? Who the heck do you think you are?’ That’s probably what she would have heard. At least that’s what I would have told her,” said Bastien.

Bastien says he’s worried about the impact all this will have on Indigenous students as he holds MRU’s actions as examples of both systemic and endemic racism.

“It makes a mockery of our culture, our ways… destroying a bundle and not explaining to the people; and here’s MRU still going on with these ceremonies and not letting the ceremonial holders know ‘We destroyed your bundle’,” said Bastien.

A big smoke, a Blackfoot ceremony, is planned by the university for the end of January. Last year’s big smoke was hosted by manyguns. She explains it as a winter ceremony that is called to bring positive success, good luck and good health. Armstrong participated in the ceremony last year, saying it was “an honour.” However, she has no plans to participate this year.

“I just struggle with, ‘We’ll honour some groups and not other groups. We’ll talk to some people and not other people.’ That’s not how I work. I’m just uncomfortable with that. There needs to be more openness and transparency,” said Armstrong.

She points out that MRU’s slogan is, “You belong here.”

“So do only certain people belong here? Does everybody belong here? Do they only feel they belong here sometimes? There shouldn’t be qualifications with that. It should just stand alone,” said Armstrong.

Windspeaker.com reached out to manyguns and received an email response: “I have no comment(s) to make about this article’s claim, mainly because I follow the protocol of our ancestors which requires that we don’t embarrass people.”

MRU administration responded with a statement although Windspeaker.com requested an interview with someone who could speak specifically on why the knowledge bundle was destroyed and why no discussion had taken place with the knowledge keepers.

MRU said it was “committed to discussions with the Indigenous community within MRU and more broadly about this and wish to better understand the matter from their perspective and how best for MRU to address these concerns.”

The statement did not elaborate on what “this” is, nor did it ever specifically state “knowledge bundle.”

MRU further said that “the transfer of knowledge from Indigenous communities…is deeply meaningful to us” and that the university is “committed to Indigenization and decolonization…and acknowledge there is more important work that remains ahead of us.”

Armstrong wonders if MRU’s refusal to specify the knowledge bundle in its statement is out of protection for manyguns as the university is relying on her to guide them through the changes.

She believes that protection is both unnecessary and harmful.

“You could in a healthy way say, ‘linda, we stand behind you and the choices that you made but we need to understand them better and so do all of these other people,’” said Armstrong.