Despite significant achievement in his early career, Billy-Ray Belcourt says he’s still growing as a writer 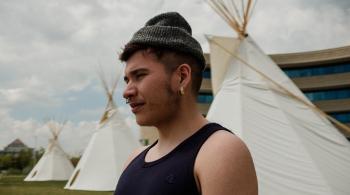 “As I get older and write more and read more and live a fuller life, I see that I’m still growing as a writer and that I’m more compelled to take my time now.” — Billy-Ray Belcourt
By Adam Laskaris
Local Journalism Initiative Reporter
Windspeaker.com

The early rise of Billy-Ray Belcourt as a writer of considerable note is nothing short of exceptional.

He packed in a list of accomplishments for his first pair of books that most authors only hope for in a lifetime. At age 23, Belcourt was the youngest-ever winner of Canada’s prestigious Griffin Poetry Prize for his 2017 debut collection This Wound is a World, and was named the recipient of the 2018 Robert Kroetsch City of Edmonton Book Prize.

Belcourt’s second book, NDN Coping Mechanisms: Notes from the Field, was the winner 2020 Stephan G. Stephansson Award for Poetry, while also making a handful of other award shortlists again.

Belcourt received a prestigious academic distinction when he was named the first-ever First Nations Rhodes Scholar in 2016, providing him the opportunity to study at Oxford University in England, where he completed a Masters degree in Women's Studies.

“It is surreal sometimes to be the same age as your students. Sometimes I joke that I’m older than I am in colonial years, so that gives me some expertise or maturity,” Belcourt said with a laugh.

“I think that it’s important that we see people in positions of institutional authority of varying ages and experiences and social positions,” he said.

Originally from the Driftpile Cree Nation in Alberta, Belcourt’s work often touches on his experiences as a queer Indigenous man navigating his way through a modern society.

In his 2020 memoir, A History of My Brief Body, Belcourt discusses life in rural Alberta and his experiences growing up — dating apps, studying at Oxford, as well a deep dive into relationships with his family. A national bestseller, the memoir was listed as one of Indigo’s Top Books of 2020.

And while it’s a common statement brought up to him that being in your mid-20s isn’t the typical time in life to write a memoir, Belcourt says that he felt it was necessary to find a way to communicate his experiences.

While figuring out what to study for his undergraduate degree, Belcourt admits he wasn’t always sure what career path he’d be taking.

“I was a pretty voracious reader, but I didn’t do a whole lot of writing in high school,” he said.

After being named valedictorian of his high school in 2012, Belcourt enrolled at the University of Alberta in the Comparative Literature program.

“I wanted to study to become either a teacher or a lawyer, but coming from rural Alberta I didn’t really know what kind of learning occurred at a university.”

Belcourt said, he’d find himself reading works off the syllabus of his sister’s college program while still in high school, so the signs were there.

“I was always doing something in excess of secondary education that should’ve alerted me to the kinds of intellectual desires I had,” he said.

Belcourt began posting poetry on a Wordpress blog online in his late teen years, just a little over five years ago.

“I needed something more personal and urgent [than academic writing], and I had a bit of an audience,” Belcourt said. “The response was very heartwarming and encouraging.”

Today, it’s tough to find anything but praise for Belcourt’s work. On the popular book rating website Goodreads, all three of Belcourt’s major works see an average of 98 per cent positive reviews, with more than 50 per cent of all reviews on all three books coming in with five stars.

“I’m in a unique position where the books I’ve published are little landmarks of my growth as a writer and an artist,” Belcourt said.

A book review of A History of My Brief Body by CBC’s Peter Knegt reads the book “cements Belcourt as one of our greatest young writers,” while the Toronto Star’s Deborah Dundas called it “as lyrical and profound as you’d expect.”

Belcourt says he’s learned that writing isn’t always about how quickly you can get the next piece out. He’s aiming for a fall 2022 release of his debut novel A Minor Chorus as part of a two-book deal with Penguin Books.

“As I get older and write more and read more and live a fuller life, I see that I’m still growing as a writer and that I’m more compelled to take my time now,” he said.