On This Day in Our History: ‘Your nightmare will end too’ —Desmond Tutu 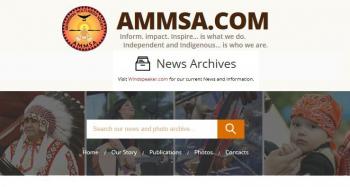 During her keynote address on Nov. 27, 1998 at the celebration of the 50th anniversary of the Universal Declaration on Human Rights in Edmonton, United Nations High Commissioner Mary Robinson cautioned the delegates.

Even though the world had come a long way since the horrors of the Nazi death camps, which prompted the writing and adoption of the human rights declaration, there was still a long way to go, she said.

Sensing a certain smugness in the well-fed and comfortable delegates spending a pleasant evening in the Shaw centre, Robinson reminded them that the battle against those who would perpetrate the likes of the holocaust on mankind has still not been won.

"These very horrors have revisited Cambodia, Bosnia and Rwanda very recently," she said.

She also said economic disparity was plaguing the world.

"We can't celebrate when millions are still victims of terrible poverty," Robinson said.

Archbishop Desmond Tutu charmed the entire city during the many public appearances he made.

Freedom has broken out in all kinds of places, even the most unlikely," he said of the end of apartheid. "That victory for us in South Africa would have been impossible without your love, your prayers, your support. Our victory then is your victory. Thank you, thank you, thank you. It's thanks to you that Nelson Mandela is free today. It's thanks to you that we are free in South Africa today."

But it was thanks to Tutu that one of mankind's finest moments became a reality. As the chairperson of the Truth and Reconciliation Commission, Tutu earned the respect of the world by elevating forgiveness and healing above retribution.

Read AMMSA.com for more on Tutu’s comments. The story can be seen here: http://ammsa.com/publications/alberta-sweetgrass/no-problem-too-big-solve-0