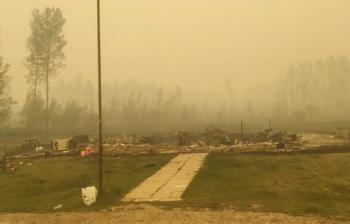 Homes destroyed and others damaged, but it was more than that awful thing that wildfire took from the residents of Paddle Prairie Metis Settlement. Photo by George Wanuch.

“…when you go home and see it for the first time, you’re going to cry.” —Anita Anderson
By Shari Narine
Windspeaker.com Contributor

The Chuckegg Creek fire claimed 16 houses and a way of life on the Paddle Prairie Metis Settlement.

Smoke from the Chuckegg Creek fire forced the evacuation of as many as 800 people residing in the Paddle Prairie Metis Settlement in northwestern Alberta on May 22. However, it was a raging wildfire that kept them away until June 20.

That fire not only left about 50 people homeless and damaging an additional 12 homes, but it burned down forest on and around the settlement. A few years ago the settlement’s woodland was assessed at $5.5 billion if the trees were clear-cut. It was money residents turned down.

“We’re talking decades of parents, of grandparents handing down to all of their children, their grandchildren, the hunting places with the salt licks, the places where you go pick the berries, where you went and got the traditional medicine. Where you would just go do your cultural pursuits. All of that is what is lost. That’s the travesty of this,” said Lehr.

Land for hunting has also been destroyed, which means sustenance has been lost.

The general council, which is the governing body for the eight Metis settlements in Alberta, has dipped into its future fund, established in 1989, to give Paddle Prairie $3 million to try to address its housing issues. Neither the houses lost nor the homes damaged carried insurance. The settlement’s infrastructure was insured, but experienced only slight damage.

Lehr said the Paddle Prairie Metis Settlement council is meeting with those who lost their homes to see how they want to move forward with both interim and permanent housing. Modular homes, which can be set up within two weeks, are one option, but residents can also choose stick-built homes.

Money earmarked by the Paddle Prairie council for building new houses this year will now be used to repair the damaged homes.

However, that’s where the money for rebuilding ends.

During the evacuation, the province said it provided Paddle Prairie residents with over $443,000 in support payments.

However, says Lehr, at $1,250 per adult and $500 per child, the money was not enough. The evacuees couldn’t work for 28 days, their bills piled up at home and only their immediate expenses were covered by the province. Lehr says his request for additional funds from the province for evacuees was turned down.

Not everybody collected those payments, he adds, pointing out people remained in the community to battle the fire and provide supports. Local entrepreneurs provided their own equipment; local firefighters helped battle the fire; and a dozen or so women prepared food, paid for by the settlement, for the firefighters.

Lehr also points out that the community initially evacuated residents due to poor air quality, which then turned into a fire evacuation. They were given no warning by the province that their homes were in danger and were unable to return to gather personal or important belongings between the smoke advisory and the fire threat.

Anita Anderson from Gift Lake Metis Settlement and employed by the general council helped with the evacuation and registration centre in Grande Prairie, where the majority of evacuees went.

However, Anderson’s help went beyond that. She spearheaded a small group that hosted a fundraiser in Grande Prairie on June 22 and June 23. About $15,000 was raised through ticket sales and proceeds from a raffle and blind auction. The money will be going to the Paddle Prairie Metis Settlement Association fire relief efforts.

Anderson says even though the evacuation order was lifted two days before the fundraiser, some evacuees returned for the event.

“Some of the speeches that we heard was that when you go home and see it for the first time, you’re going to cry,” said Anderson.

The Bring the Rain fundraiser was a success because of support from Grande Prairie and area businesses, as well as people who donated to cover the costs of the venue.

Both Anderson and Lehr were moved by the support Paddle Prairie received from the general public.

“That there are people out there who have nothing to do with the Metis settlements, just the fact that they saw someone who was having a tough time and wanted to contribute. That’s been very well received and we’re very grateful and thankful to all those people,” said Lehr.

“There were time he was calling me five times a day trying to get updates, trying to see what he could do, setting up meetings with ministers continually, going to the federal government level as well advocating for us,” said Lehr.

The province covered the costs of fighting the fire both in the forest and settlement. Lehr says the Metis Settlements General Council is in discussions with the province about reforestation and innovative ways to create fields out of the burn areas and to develop fireguards around the perimeter. They’re also discussing employment opportunities for Paddle Prairie residents.

The federal government has yet to step up, says Lehr, who points out that while the Metis National Council receives federal funding, the general council does not.  It received $5 million this year from Alberta through a bilateral agreement.

Lehr also says there has been no federal dollars to help with the aftermath of the fire losses. He says he will be pursuing this avenue with Ottawa.

Lehr also says he’s looking for verification on allegations that indicate manpower and equipment were sitting idle in High Level, Manning and Fort Vermilion while Paddle Prairie was burning.

“The fire did not originate in Paddle Prairie. We lost all of this. Our members are paying a huge price for a fire that came into their community from somewhere else,” he said. “Our people are traumatized.”