Crystal Shawanda to hit the stage for Edmonton Blues Festival 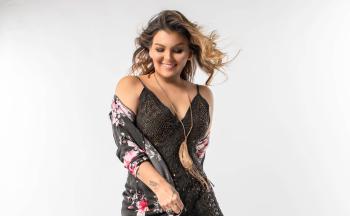 “She’s incredibly talented. At first, I was taken aback by her switch from country to blues, but when I started really listening to her music and then seeing her perform, I realized she is a blues woman through and through.” — Edmonton Blues Festival producer Cam Hayden
By Crystal St.Pierre
Local Journalism Initiative Reporter
Windspeaker.com

Crystal Shawanda originally launched her career as a country music singer, but several years ago she followed her heart and found herself singing the blues.

“I started my career in country music. I had a big hit. My album, it was the first time an Indigenous artist charted on the billboard charts in the top 20 in America,” said Shawanda.

“But then I started feeling restless and I knew in my heart I wasn’t where I was supposed to be and that’s what led me to the blues.”

Since that move, Shawanda has had her fair share of challenges to make a new name for herself in the genre.

She described the transition as “difficult” after having already established herself as a country music artist and winning several awards, including a Juno and a Canadian Radio Music Award.

“Switching to blues was basically like starting over, right back to zero again,” she said. “I had to earn my place in the blues world. People in the blues world were like ‘you’re a country music artist. You don’t know anything about blues.’ Not everybody, but some people did. Some were what I call gatekeepers. People who decide who is worthy.

“It was really hard. I was torn in two. There was a moment where I was like ‘Am I committing career suicide?’ because that is what people in the industry were telling me.”

Through tenacity and passion for her music, Shawanda was able to turn around those who doubted her and build back her fan base.

Touring across North America since March, she is looking forward to being part of what she believes is one of the top blues festivals in Canada.

“This is my first time at the Edmonton Blues Festival and it’s what I have been really wanting to get on and I’m really excited about it,” she said.

Shawanda, along with a line-up of talented performers, will be dazzling audiences at the festival Aug. 19 to Aug. 21. Tickets can be purchased online until Aug. 18 and then at the entrance each day.

Edmonton Blues Festival producer Cam Hayden said Shawanda was one of his top choices for the line-up this year.

“She’s incredibly talented. At first, I was taken aback by her switch from country to blues, but when I started really listening to her music and then seeing her perform, I realized she is a blues woman through and through,” he said.

“She has her own interpretations of the music that are excellent. She really puts her heart and soul into everything she does on stage.”

Shawanda, who is from Wiikwemkoong First Nation in northern Ontario, has been writing her own lyrics since she was a young teenager. Her first album was recorded when she was just 12 years old. While she also performs lyrics written by others, she said she needs to truly feel a song before she can perform it.

“I pick my songs with what I feel most strongly about, what I can sing with conviction,” she explained.

“Every song, whether I wrote it or somebody else wrote it, it is always something I have been through so that I can relate to it, so that I can communicate it to the audience and feel it the way it should be felt. That way they know when I’m singing that song ‘hey, I’ve been through this too and you are going to be okay because I’m okay now’.”

Life has been pretty good to Shawanda, despite seeing trauma within her family.

“I was like this little old lady in a kid’s body,” she saying about being a preteen.

“I’m just like a lot of other kids who grew up on reservations. I grew up surrounded by it all. Depression, suicide, addiction, alcoholism. People in my family. I watched my loved ones go through that. It makes you grow up fast. You understand the world a lot better… The people will call you an old soul when you have been through a lot of trauma like that. I grew up fast. It was a good thing, but it was also a sad thing, but I persevered.”

Her perseverance is partially due to her parents, who had a strong desire for their children to live a better life.

“My parents worked really hard to break that cycle of intergenerational trauma,” she said.

They always encouraged Shawanda and her two older brothers to follow their dreams and aspirations.

When Shawanda was 12, her father owned a small trucking business and had received a credit card.

“My parents weren’t rich at all,” she explained. “But, my dad, he really believed in me and he wanted me to know there’s a big world out there and that I could be a part of it, just as much as anybody else. So, he laid down that credit card and paid the producer, and I recorded my first album.”

From the songs she recorded on that very first album, two of them she wrote using her hand drum, a passion of hers to play to this day.

Now, 28 years later, she’s releasing her latest blues album, Midnight Blues, on Sept. 30. It’s available now for presale. Her single “How bad do you want it” is already available.