Cowichan Elder links survival of language, culture with his world of plants 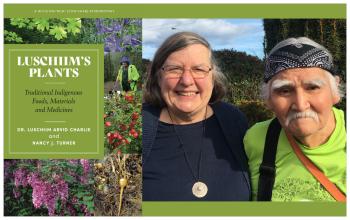 “Some of our ways can be very sacred, and I guess I could say secret. It’s no different than some of the things some of the churches have. Some things that you practice but aren’t shared openly.” —author Dr. Luschiim Arvid Charlie
By Shari Narine
Local Journalism Initiative Reporter
Windspeaker.com

“The basic knowledge of the names (of plants) I say in several places, (but) not in so many words. I give a hint to increase knowledge, and it’s up to that individual to go and seek that knowledge,” said Charlie.

After all, that’s how the teachings of plants and their secrets were passed on to him.

“One of my uncles shared with me very important things, but he waited to see how I would seek that knowledge he had shared with me. And it wasn’t until about 30 years later before he gave me the rest of the knowledge that goes with that information,” said Charlie.

That knowledge was eventually imparted to him by his uncle because in those 30 years Charlie had “lived the way I was supposed to.”

Younger members of Charlie’s own family are starting to learn the secrets of the plants. Yet, the Cowichan Tribe Elder, who was born in Quamichan in 1942 and has lived in the Duncan, British Columbia area all his life, realizes not enough Hul′q′umi′num′ language and traditional knowledge of plants is being picked up by the younger generations.

He says he got the push to record his knowledge after speaking with an Elder who said it wasn’t necessary to learn about the plants and their medicinal or sacred value because the “white man’s medicine is better than ours.”

To that sentiment Charlie points out that viruses can become immune to western medicine over time.

Shortly after his conversation with the Elder, Charlie met Turner in the 1990s.

Turner is internationally known for her work in ethnobotany, the study of plants and cultures. She has worked with First Nations Elders and cultural specialists in northwestern North America for more than 50 years, helping to document, retain and promote their traditional knowledge of plants and environments.

“Every time we met, maybe the next six, seven, eight years, we shared so much. We just said, ‘Geez, it would be good to document some of these, the knowledge.’ She started to write down whatever I said. I knew all the Hul′q′umi′num names, the Indian names, to all the trees, shrubs, grass. I had to learn the English names to them,” said Charlie. “I’ve still got a few names to learn yet. I know the Indian names but not all the English names.”

“I grew up with it. You live with it every day,” he said.

But while he lived with it everyday, he also became painfully aware of how much knowledge was vanishing.

And thus the pair co-authored Luschiim’s Plants, Traditional Indigenous Foods, Materials and Medicines. The project began in 2005 and concluded in 2020.

Charlie says Turner was respectful in her approach and with his Hul′q′umi′num knowledge.

The book is full of wonderful photographs, the majority taken by Turner, and the general Hul’q’umi’num’ botanical names and terms pertaining to plant use are front and centre.

Luschiim’s Plants points out that many of the plants described are no longer as bountiful as they once were and cautions people to harvest “in a sustainable way, guided by how common and plentiful the plants are and the impacts that harvesting might have.”

While the medicinal value of the plants is shared by Charlie, he is not as forthcoming about the ceremonial context.

“Some of our ways can be very sacred, and I guess I could say secret. It’s no different than some of the things some of the churches have. Some things that you practice but aren’t shared openly,” he said.

He also points out how the terminology used by physicians and lawyers can’t be understood by all.

“It’s the same thing with this. Some of the words that need to be known, the ordinary person doesn’t get to hear it or learn it,” said Charlie.

“On the other hand,” says Luschiim’s Plants, “cultural knowledge of the day-to-day uses of plants for foods, medicines or in technology is meant to be shared widely and passed on to future generations, for increased understanding and valuing of the plants and the places where they grow.”

Luschiim’s Plants includes a linguistic writing guide with pronunciation for the Hul’q’umi’num’ words. The plants highlighted range from seaweeds to mosses and liverworts to shrubs and vines and are associated with Quw’utsun culture. There are almost 200 species examined.

Charlie hopes Luschiim’s Plants piques the interest of the youth and people to take up studying plants and “learning the Hul’q’umi’num’ way.”

As for the Hul’q’umi’num’ language, Charlie admits he is more than hopeful about its continued use. He points to his nephews and nieces and grandchildren who canoe, play lacrosse and soccer.

“All of those sports are teaching them to grow their language that goes with it. Some of them are coming around to expand their knowledge that way. They’re using the modern way, listening, and of course they’re writing it down,” said Charlie.

“I hope anybody who looks at the book can learn the languages, also to learn the writing system.”

Luschiim’s Plants: Traditional Indigenous Foods, Materials and Medicines is published by Harbour Publishing. It is available in stores and on-line.