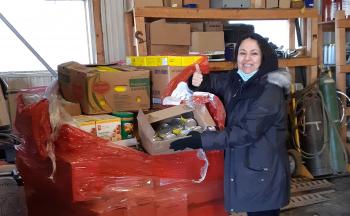 “I feel in general the kids are not getting the variety of foods that we would hope that all children in Canada could get due to the poverty and lack of access to fresh foods.” — Missabay Community School principal Lorraine Pitawanakwat
By Shari Narine
Local Journalism Initiative Reporter
Windspeaker.com

The coronavirus pandemic added one more dimension to the struggle faced by remote communities in northern Ontario when it came to feeding their populations.

Isolation efforts to protect against the spread of COVID-19 made it almost impossible for people to travel south to grocery shop. This on top of the shortened lifespans of ice roads due to climate change, skyrocketing food costs and decreased help from larger organizations that supplement food supplies.

All these factors came into play for fly-in communities in Ontario which saw food costs increase by 400 per cent during the pandemic, according to figures offered by Mikinakoos Children’s Fund, which supports remote communities.

Mishkeegogamang Ojibway Nation is the last community on the road heading north in Ontario.

The impact of food prices, the difficulty accessing fresh fruit and vegetables on a regular basis during winter, and the lack of variety of foods available were concerns for Missabay Community School principal Lorraine Pitawanakwat, who was trying to keep her 200 students from Kindergarten to Grade 8 fed.

The school in Mishkeegogamang First Nation provides breakfasts and lunches for the children.

“Because of COVID, we didn't get the same community help as they have had in the past,” said Pitawanakwat.

Many First Nation communities closed off their borders to outsiders and Mishkeegogamang was no exception.

“Less trips were made because of restrictions,” said Masakeyash, because of the fear of bringing the virus into the community and the terrible impact it would have.

“Some private organizations that used to send food this year were not allowed to due to COVID safety concerns,” said Pitawanakwat.

In the south, many non-profit organizations stopped operating as volunteers were homebound, and in the north, access to communities was restricted.

One organization that came through for Mishkeegogamang was the Mikinakoos Children’s Fund, a charity based in Thunder Bay. The charity’s ‘backpack’ program works to feed one child for two to three weeks.

“It was very important this year. The main shipment we received for the whole year was through them. Nobody else really knows about us. We're a small community. We don't have a lot of staff. Like many other small communities, we're on our own. We're not really connected with bigger communities or bigger organizations,” said Pitawanakwat.

She was instrumental in advising Mikinakoos in what food to put in the backpacks, which were actually boxes.

“They asked me to say what we wanted and we ended up sending home large boxes of food to each family with a variety of food,” she said.

Masakeyash pointed out that the federal government had shipped an emergency supply of food to Mishkeegogamang to feed the 1,300 who live on reserve in case access was cut off. Storing the food took over the band office and community hall.

“We had to have plans in place to make sure that if there’s anything that happens, if a shut down happens, we have to have basic supplies and other supplies on hand where families can be helped. We have to be prepared all the time…. It was a good thing,” he said.

The majority of those emergency staples are still available and will be held onto “until it’s absolutely known it won’t be needed anymore,” said Masakeyash.

COVID also meant community members couldn’t travel the 35 kilometres to Pickle Lake or take the three-and-a-half hour one way trip to Sioux Lookout to grocery shop because, on their return, they were required to isolate for two weeks. There is no grocery store on the reserve.

However, even before COVID, Pitawanakwat says she was concerned about the food children in the north were getting. Before working in Mishkeegogamang, Pitawanakwat worked in the fly-in communities of Kashechewan and Kingfisher.

“I feel in general the kids are not getting the variety of foods that we would hope that all children in Canada could get due to the poverty and lack of access to fresh foods,” she said.

Processed foods are the most common in the northern grocery stores as they keep longer. Milk, juices and even potatoes are priced higher because their weight makes shipping costly.

“The suppliers that do have stores in communities in the north, they monopolize the prices as they wish and that’s part of the problem,” said Masakeyash.

Pitawanakwat says northern and remote communities are also facing a decreased time for winter trucking of products because the ice roads that were once operational for months are now only operational for days or weeks because of climate change. Gravel runways can only accommodate the small planes that fly in groceries.

Both Pitawanakwat and Masakeyash say infrastructure improvements are required in order to address food issues. Support, they say, needs to come from both the federal and Ontario governments.

“It would be very beneficial for the community to have its own store, own supplier, where they can reach out to them any given day and get the supplies needed,” said Masakeyash.

Pitawanakwat says partnerships should be formed where warehouses are built at a central distribution location which would allow for larger shipment of goods.

She would also like to see partnerships formed with northern Mennonites and farmers to teach community members about farming; and she would like to see youth taught about greenhouses in schools.

Pitawanakwat says First Nations need to “de-colonize our diet” but points out that subsistence hunting, trapping and fishing is getting more and more difficult with the encroachment of mining, the clearing of roads for powerlines, and the industrial pollution in water.