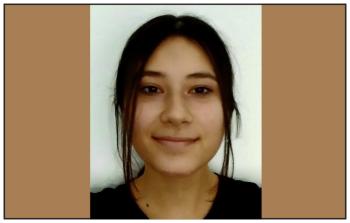 “Pearson offers a global politics class and a really good marine biology class, so I picked those for next year to see if I’m interested in pursuing those fields.” — Sofia Auger Nybida
By Adam Laskaris
Local Journalism Initiative Reporter
Windspeaker.com

While most students get to attend a local high school, Sofia Auger Nybida will be making the trek down the coast of British Columbia for her Grade 12 year.

Auger Nybida was awarded a $130,000 scholarship to attend Victoria’s Pearson College for Grade 12 this fall. For the year following, the Anishinaabekwe student will take an International Baccalaureate year at the international school. The scholarship covers two years tuition and full room and board.

There’s no formal high school after Grade 9 where Auger Nybida lives on Cortes Island. Residents either have to leave the island or find alternative forms of school. Auger Nybida enrolled with SelfDesign, a homeschooling program based out of Nelson, BC.

“I felt I enjoyed homeschooling way more [than a traditional school], but I didn't get to have any social interactions at all,” said Auger Nybida in an interview with Windspeaker.com. “So next year will be really exciting because of that, meeting people from all over the world. So that will be awesome.” Pearson is a two-year pre-university school for students from more than 150 countries.

While remote learning isn’t always easy, she was a top student in her age group.

“Other people I know that homeschool on the islands do have a really hard time with it because you have to have a lot of self-discipline or else you get nothing done,” she said. “But I think I was good because I learned how to manage my time... Which is also good, because next year it will be really crazy and I'll have to have that skill.”

Auger Nybida said she’s looking forward to integrating herself with her new classmates.

“I was kind of worried… I knew that I don't have any high school experience like with the students and having a much bigger workload,” said Auger Nybida. “So I was worried that if I went to university and was living in a dorm I wouldn't have any experience, but now I'll have two more years to get used to that.”

Auger Nybida was mulling her options for next steps and decided that applying for the Pearson scholarship was worth a shot.

“I didn't have any plans for next year and I was kind of tired of homeschooling,” she said. “I just applied and I tried my best. I was really surprised I got it. I didn't think I was going to.”

As for what type of career path and academic stream she’d like to pursue after Pearson, she’s keeping her options open.

“I've thought about becoming either a counselor or social worker for children,” she said. “Pearson offers a global politics class and a really good marine biology class, so I picked those for next year to see if I’m interested in pursuing those fields.”

One of Auger Nybida’s learning consultants with SelfDesign was Jana Russell-Loewen, who along with her husband David, provided references for the student’s successful scholarship application.

“It's something she's wanted to do for quite some time,” Russell-Loewen said, whose work with Auger Nybida came in during middle school, while her husband instructed the student during high school.

“[Sofia is] just such a gifted person that it was easy for us to think of things to recommend for her,” said Russell-Loewen, citing Auger Nybida’s activism and interests in guitar, Indigenous languages and weaving. “She really sought out so many of her own mentors living on Cortes. She always seemed to just kind of naturally draw people to her.”

Russell-Loewen said remote learning is difficult, even with the SelfDesign model.

“It’s a very non-traditional type of education,” she said. “I guess it doesn't work for everyone but we're so grateful for her because she's so independent, so creative, so intrinsically motivated; more than almost anyone I've ever worked with.”

Russell-Loewen said the connections she and her coworkers make with students like Auger Nybida really stick with them over time.

“Every time you talk and meet with someone on Zoom or through writing, it's really, really personal,” Russell-Loewen said. “There's a lot of really personal things shared and so it's really quite rewarding to see this person over the years mold into more and more of themselves, often becoming so confident and empowered to feel capable of what they want to do. Sofia is such a great example of that.”