Consent is a cup of tea, participants learn at Free, Prior and Informed Consent Conference 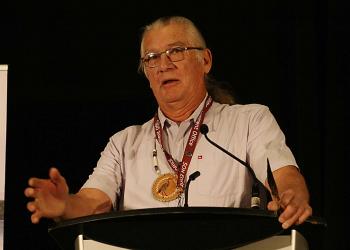 “We have a nuclear waste problem.” —Randall Kahgee, former chief of the Chippewas of Saugeen First Nation
By Deb Steel

The duty to consult, “we’ve beat that conversation to death,” said Doran Ritchie, employed in land use planning at the Saugeen Ojibway Nation Environment Office. First Nations are evolving, he said, to free, prior and informed consent.

The Saugeen Ojibway Nation (SON) is host to a conference this week devoted to the next steps in that evolution. In his welcome to the Saugeen Ojibway territory, Greg Nadjiwon, chief of the Chippewas of Nawash Unceded First Nation, one of two SON nations, told the gathering that the conference on free, prior and informed consent was a first of its kind.

The nations that make up SON are not strangers to the rights assertion struggle. It was in 1990 when SON decided to pursue its “rightful claims to the land and water and our Aboriginal treaty rights, including the right to trade and commerce in our territory.”

A major land claim will go to litigation starting April 23, 2019. The nation is also involved in a fishing agreement, now in its 16th year.

“It recognizes the right to govern and manage the resources in our territory” including commercial fishing.

“The gains we have today didn’t come easy,” said Nadjiwon. “It was through many, many nights and days of discussions with the Crown and others.”

In the early 1990s, in a time now known as the fish wars, the nations asserted their right to that commercial fishery.

Young people were “challenged” in the streets by those who would deny their rights, and there was significant damage done to a vessel by the dock. But the people fought through the nastiness and stayed united, said the chief, and they took the fight to court, receiving a decision in their favor, “which settled the fact that we did have an inherent right to govern our territorial waters.”

The environment office, which has organized the Free, Prior and Informed Consent Conference, was established after the Haida Gwaii decision by the Supreme Court of Canada. And the office is tasked with a number of files, including one issue that most First Nations in Canada will never be challenged by.

“We have a nuclear waste problem,” said Randall Kahgee, former chief of the Chippewas of Saugeen First Nation, the other SON nation.

SON may well be the first Indigenous nation to implement its right of informed consent over a project, said Kahgee. In 2013, Ontario Power Generation committed that it would not build its planned deep geologic repository to store low and intermediate-level waste from its nuclear facilities in SON territory without SON’s consent.

Getting that commitment was a long battle, but today, yes, no, or yes with conditions, the project’s future in the territory will be up to SON.

The people are scared, said Kahgee. They weren’t consulted about locating nuclear facilities in their territory in the 1960s. Since that time, nuclear waste has been produced, from low grad to high level waste, and stored above ground at the Bruce Power site.

Compounding that issue is the nuclear waste brought in from other parts of Canada, shipped into the territory to the storage facility. About 40 per cent of Canada’s used nuclear fuel is stored in SON territory.

So it’s a Saugeen Ojibway Nation problem now and for hundreds of thousands of years, if not millions, into the future. If things go sideways, it's not like the SON people can pack up their territory and move away, said Kahgee.

Never has there been a more glaring example of the need to assert the legal requirement of free, prior and informed consent going forward. And yes, it is a legal requirement, according to the experts in the room. It is implicit in Section 35 of the Constitution, in treaties, and in Canada’s obligations under international law, they say.

But what is it and how is it used? That’s what the conference dove head-first into yesterday and with its opening plenary session.

Sadiq is an environmental planner specializing in natural resource management and Indigenous and community engagement. A few years ago, she was in the boardroom with a client nearing the end of a project when they received a letter which told them they could not proceed because they did not have free, prior and informed consent for the project.

It was the first time the client had heard those words, she said.

Sadiq went out to study the different interpretations of the words from different sectors, including what they mean to government, industry and the Indigenous peoples themselves. Words have power, she said. They change meaning over time, they evolve, have context and are extremely important. If all those involved aren’t on the same page with a word’s meaning, the action associated with it won’t be consistent.

Free: In Sadiq’s study, the word free was interpreted to mean free to make a decision; to express views; exercise control over territories; an absence of coercion; to have sufficient time to engage; to encompass past issues; freedom to talk about past issues; the ability to understand what “we are consenting to”; consisting of own participatory methods.

In the case of the consent duty for a deep geologic repository for nuclear waste, SON has determined its own process for consultations, arms-length from government or proponent interference. It is a multi-phased approach without timeline, though SON is not naïve, said Kahgee. The proponent could make the decision to pull the project before the end of the consent process. Additionally, SON will design its own question(s) on the issue of consent and its own process for making that decision.

On the freedom to deal with past issues, SON has also secured a commitment from Ontario Power Generation to address the historical impacts of its operation on SON territory.

Prior:  In Sadiq’s study the word prior means pre-exploration, which means pre-development. What’s the relevance of consent if its asked for when a project is beyond the point of turning back? What’s needed is sufficient time to understand and engage. Getting a 300-page proposal and given two weeks to respond is not in the spirit of the word ‘prior’.

Start the process of engagement early with ‘we don’t know if its feasible, but we think it’s worth exploring’, said Sadiq,  and get permissions over the years as the process unfolds.

It can’t be assumed that a checked box of permission at the front end of a process gives permission over the life of the process, 22- to 45 years from the time a worker with a backpack walks into the forest for exploration to the launch of the project, said Sadiq.

Prior means before the first domino falls; before irreversible issues are decided.

Inform: The materials meant to inform must be relevant; there must be a capacity to become informed and allowances made for true learning, said Sadiq. The engagements should be built together for culturally appropriate ways to inform and done on an ongoing basis. It should be begun early and done through all phases of the life of the process. What there is to talk about must be established jointly.

Consent: It’s the heaviest of all the words, said Sadiq. Some insist that consent is the power to veto. Others say no. And still others say the veto discussion is a distraction.

Consent is an agreement. Some say the process is the responsibility of the Crown. In an afternoon workshop on free, prior and informed consent in the law, legal council for the Grand Council of Crees, Paul Joffe, explained that the Crown cannot delegate its responsibilities under the law, and all other governments in Canada can’t ignore those responsibilities—not provincial nor municipal. They are obligated too.

She sat down with an Elder to talk about consent, and was shown a video. It was a tool that was shown to teenagers in sex education that talks about what consent is.

Consent is a cup of tea, the video said. If someone offers you a cup of tea, and you say no, they can’t pour that cup of tea down your throat, Sadiq explained. And if you say yes, and in the course of making that tea you decide you no longer want it, they can’t force you to have it, not at any stage of the tea-making process.

Can consent in the context of the Crown-proponent-First Nation perspective be really that simple? The conference continues today near Collingwood, Ont. at Blue Mountain Inn.