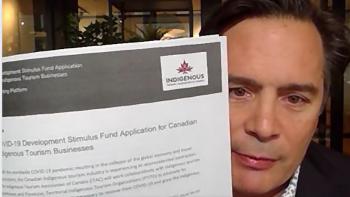 Keith Henry, the president and CEO of the Indigenous Tourism Association of Canada

“I hope people know you can’t use our $25,000 to go pay back AFI loans.” — Keith Henry, the president and CEO of the Indigenous Tourism Association of Canada
By Sam Laskaris
Local Journalism Initiative Reporter
Windspeaker.com

Some progress is being made, but there’s still plenty of work to be done.

That was a message delivered by Keith Henry, the president and CEO of the Indigenous Tourism Association of Canada (ITAC), in a webinar he hosted on Facebook this past Friday.

It was the second consecutive week Henry provided an update on the $16 million in federal funding that was announced in mid-June to support the Indigenous tourism industry because of struggles caused by the COVID-19 pandemic.

ITAC was selected to deliver this funding via a grant stimulus program it was offering.

Back in April more than 600 Indigenous tourism businesses applied to ITAC for $25,000 grants it announced, using ITAC’s own resources. ITAC was able to get grants out to just 93 business. Federal funding for the Indigenous tourism sector was announced in June. It was believed that with the federal dollars all 600-plus applicants would be able to get the $25,000 grant.

But by Aug. 6, Henry explained the federal funding hadn’t yet started to flow. Eyebrows were raised when John Giraldez, the director of business development for Indigenous Services Canada (ISC), announced that the stacking of federal funds was not permitted.

So, any other sources of federal funding, including any obtained through provincial or territorial Indigenous tourism associations supported by federal money, would have to be deducted from the $25,000 ITAC was offering.

This especially infuriated many business owners who had also applied for a maximum of $40,000 in emergency loans from the federal government, administered through Aboriginal Financial Institutions (AFI).

Those that did receive a $40,000 AFI loan did so with the understanding $30,000 of that AFI money would need to be repaid. And if it was repaid on time then the remaining $10,000 would be a grant, and would not be required to be repaid.

Many Indigenous business owners were blindsided by the fact they were not considered eligible for ITAC grants if they had already received the maximum AFI money.

During Friday’s webinar Henry said ITAC and ISC representatives were able to negotiate through some of this confusion.

“We’ve been able to make some progress since last week,” Henry said. “It’s still not perfect.”

As things stand now, Indigenous tourism business owners are still eligible for grant funding through ITAC even if they did apply for the maximum $40,000 emergency AFI loan. But they would have to subtract the $10,000 non-repayable portion, meaning businesses could only receive a maximum of $15,000 from ITAC.

On the flip side, Henry revealed not all news since his initial webinar was positive.

That’s because back in May, before the federal funding announcement was made, ITAC had sent out grant money to almost 100 applicants.

But in the proposed Statement of Agreement between the ISC and ITAC a clause reads as follows:

Should this clause remain in place, it would create an additional headache for ITAC, which would be forced to retrace its steps and try to collect some of the money it has already sent out to business owners three months ago.

Henry added liability issues could undoubtedly arise unless a solution for this issue quickly materializes.

“The challenge going forward will be how do we try to find some more flexibility,” he said.

Federal officials are also being very specific on what businesses that receive an ITAC grant can use that money on.

As he had stressed in his webinar a week earlier, Henry reminded all once again on Friday that the federal government is not providing ITAC with any money to cover the administration costs for the delivery of the grants.

“ITAC is taking this on,” he said. “It’s a significant amount of work. But we know it’s important for everyone and we want to get everyone this money into the hands of the businesses that are eligible and have qualified. We’ve taken that position and that’s what we’re going to do.”