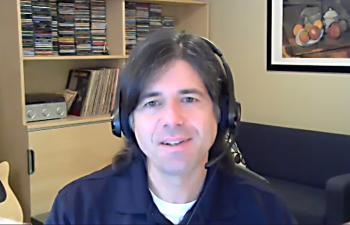 “… anything you’re doing on another infrastructure project is an opportunity today to lay fibre because building these fibre optic networks, most of it is the physical labour to actually open up the ground.” — Rob McCann of Clear Cable Network
By Shari Narine
Local Journalism Initiative Reporter
Windspeaker.com

“With COVID the world has changed. We need broadband in all our communities, everywhere, towns, cities, First Nations. We need that to conduct economic development and many other things from here on forward,” said Hare.

Hare made the comment on Feb. 16, the first day of the three-day Lands, Resources and Economic Development forum held virtually.

Due to measures to fight COVID-19, discussions with federal and provincial government officials, along with industry, have mostly been conducted online, as have education classes and business dealings.

“It is important to recognize that connectivity is a major issue in our communities,” said Regional Chief‒Lake Huron Scott McLeod.

He pointed out that his community of Nipissing First Nation, although it is geographically close to the major centres of North Bay and Sudbury, “we are still faced with major hurdles with access to broadband to all community members. During COVID, it’s really come to light.”

Hare said the best way to address the broadband issues is for First Nations to collaborate in order to ensure First Nations are not taken advantage of by Internet Service Providers (ISPs) who access land and make promises they don’t deliver on.

It was a suggestion applauded by Rob McCann of Clear Cable Networks, who led the discussion this morning on developing broadband strategies for First Nations.

“I think this is about collaboration.

“Really and truly, I wouldn’t want to see every First Nations submitting their own individual application without coordinating with each other because there is an opportunity to really save by developing some common themes and some common principles. It might be different by region, by little bits and pieces, to deal with specifics in that particular area, but there is a huge opportunity to build the major blocks of an application in cooperation in order to minimize the cost to everybody and to have a consistent message in applying for the funding,” said McCann.

He noted that applications for funding were often complicated with technical expertise required to complete them. He pointed out that while funding programs in Ontario were either closed or closing shortly, some would open again. He also noted that funding for infrastructure was available through Indigenous Services Canada.

“With the pandemic every level of government has suddenly realized that broadband infrastructure is absolutely critical to our survival to all of our communities,” McCann said.

He also urged leadership to start planning now, particularly if other infrastructure work was already underway.

“So if you have a project underway already, I would highly recommend you consider building alongside that project, making those investments, even if you don’t do anything with it today, being able to have that ready for later,” he said.

Broadband strategy would include determining why a community wants the service. It could be to deliver services to all residents at low or no cost; to deliver services to schools and community organizations; for economic development opportunities to attract businesses; or to control the local telecommunication operation and have control of the infrastructure.

It could be for all these purposes, McCann said, and that would be determined through community engagement.

Planning would also include researching where service gaps would exist; community engagement through an education campaign; talking to existing ISPs to see if they have local plans; establishing policies, which would include simple access agreements; undertaking a feasibility study and business case to establish community consensus; and prepare funding applications.

It can take up to three months to build a strategy, said McCann, which makes it important to do early preparation.

McCann said there was a “range of flexible opportunities” for First Nations when it comes to internet, including establishing partnerships with ISPs, which could lead to First Nations developing their own expertise all the way to creating not-for-profit foundations owned by the community.

First Nations could also “build (their) own ISP entirely. And certainly that is a fantastic opportunity we’re seeing lots of communities across the country take on.  It takes the ability to build some capacity, some experience in the community but it also creates great local jobs,” he said.

McCann said geography often presents a major roadblock for broadband strategies. Sometimes the ground is entirely rock which doesn’t allow trenches to be dug. Or poles needed to run aerial cable are owned by somebody else and difficult to access.

“Figuring out those roadblocks and removing them is really that last step in order to be able to implement (a broadband strategy),” said McCann.