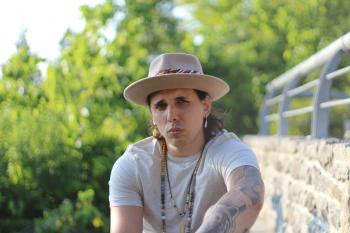 “I’m outspoken, I’m here, and I’m not going anywhere. I’m in a place of reclamation and no one is going to stop me.” — Cody Coyote
By Tsering Asha
Local Journalism Initiative Reporter
Windspeaker.com

Cody Coyote is no stranger to hard work. The artist, based out of Ottawa, has been busy these past few months of pandemic isolation. A new music video and a clothing line are just a few of the initiatives that Coyote has taken on.

The music video for his song, Debwe, will be released Aug. 28.

“Debwe” is an Ojibwe word that means truth, which is what Coyote’s song and lyrics are about.

“It’s been this really cool portion of my story and my life, of reclaiming language as best as I can,” he tells Windspeaker.com.

In the video for Debwe, powerful lyrics are rapped by Coyote against a sun-streaked California background and with a parade of colourful classic cars, harkening back to the low-rider culture he so loves.

The track and video were partially inspired by the Cherokee artist Litefoot, who embodied a west coast, Indigenous sound that Coyote admires.

“I grew up listening to his stuff, and he has one song called ‘My Land’, and I was just bugging over it. This song, that was the song for me. My brother and I came across that in high school and I had my 1985 Oldsmobile, and we would roll around with our other friend who had a Cadillac, and we had our low-riders, and we just loved low-rider culture,” said Coyote.

His video was shot with the assistance of friends made in the Pechanga community, an Indigenous community near Temecula, Calif.

Coyote connected with the community through speaking engagements he did for youth, and a chance meeting while he was visiting San Diego to shoot a music video for another of his songs, Ganawenidizowin.

Through his new found network, Coyote was then able to call upon the car club Rez Classics to bring the west coast influence to his song through cars.

The imagery in his video heavily features circles, specifically one scene where Coyote is standing in the middle of a large circle in Pechanga.

“I was losing my mind when we came up with that idea. The circle that the cars were going around, that was their medicine wheel,” said Coyote.

For some Indigenous nations, the medicine wheel is tied to many teachings. It talks about the gifts from the four directions, the four colours, often red, yellow, black and white, and the peoples associated with each.

“I was like ‘yo that would just be deadly if we could get a drone shot from up top’, and having everyone just riding around in a circle, and we just made it happen.”

Debwe is just one example of the values that Coyote works to embody, on stage as a performer and as a community leader for Indigenous youth.

Born Cody Purcell in 1992, Coyote describes his time growing up as a child of mixed ancestry, Ojibwe and Irish. It was tumultuous, fraught with bullying in school for his appearance, including for his long hair.

He found an outlet to express himself through poetry and music in high school, thanks to the efforts of a teacher and his father.

In his high school, he got the chance to experiment with more technical and creative skills of sound mixing, video production and photography, which would become central to the foundation of a brand built on self-sufficiency.

That audio room that his teacher introduced him to forever changed Coyote's perception of himself, and provided him a safe space to explore his craft, away from the pressures of school, he said.

But despite the time he put into honing his craft, Coyote said he could not escape all of his demons, and after high school was swept into the world of gang life and substance abuse.

By his early twenties he found himself in a restorative justice program, having survived a suicide attempt, with nowhere to go but up.

Coyote said he began to understand the impact that intergenerational trauma and colonialism had on him and his family.

The eldest of three boys, he said he began to recognize the strength and power his family had and said that his experiences “allowed us to become stronger as a family.”

Coyote says he brings a determined and self-confident approach to his music.

“I’m outspoken, I’m here, and I’m not going anywhere,” Coyote said. “I’m in a place of reclamation, and no one is going to stop me.”

Coyote has won multiple awards and accolades for his music and work, including the Ontario 150 Award and Ottawa’s Favourite Hip-Hop Artist Award at the 2020 Ottawa Awards, and he’s building a reputation for himself through grassroots activism, awareness and a focus on youth.

On top of his musical commitments, Coyote hosts a radio show and is a workshop facilitator and speaker, travelling to Indigenous communities in Canada and the United States to talk about his personal story.

He is passionate about educating and informing the next generation of Indigenous youth, aware that he has earned the gift of a second chance for his life.

“I’m not going to see the change that I’m fighting for in my lifetime. I've accepted that. But I can't sugar coat my message. We have to let [Indigenous youth] decide what to do,” he says.

Leaning on his experiences with substance abuse, bullying and his eventual path towards the arts, Coyote hopes his music will inspire youth to pursue their dreams, no matter the obstacle they face.

His message to Indigenous youth and aspiring artists is to simply acknowledge their own power.

“You are capable, able, beautiful and strong.”