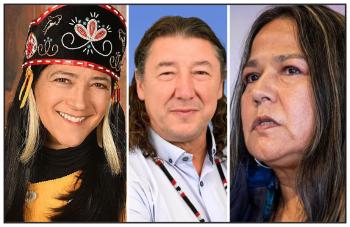 After decades of advocating for changes in the federal government’s specific claims process, First Nations came one step closer to that realization yesterday.

Work will get underway with Crown-Indigenous Relations and First Nations organizations on the creation of an independent resolution centre for the handling of specific claims.

“The creation of a truly independent specific claims resolution centre will help the parties to come together under the guise of reconciliation to truly discuss and mediate and settle long outstanding historical grievances that (have) existed,” said Assembly of First Nations (AFN) Nova Scotia/Newfoundland Regional Chief Paul Prosper, who leads the AFN’s chiefs committee on lands, territories and resources.

In April, the AFN produced a Specific Claims Reform Proposal document which called for the creation of the resolution centre, which would serve as a means to address the “flaws” in the existing specific claims process.

The document was the result of engagement sessions the AFN held with First Nations in all regions in 2019.

“Canada is in a position of conflict because it is the defendant to claims, determines the level and method of funding First Nations participation, reserves for itself a preliminary review of its legal obligations, and makes the final decision whether and what will be negotiated,” stated the document.

The proposal called for the centre to “support and manage the specific claims process from claim preparation through to claim resolution.”

The centre will not replace the special claims tribunal, said Prosper, speaking from Halifax, where numerous chiefs had gathered for the announcement, but it “will add a very important element to the resolution of claims to allow them to be resolved in a timely and fair manner.”

Crown-Indigenous Relations Minister Marc Miller joined the announcement on a Zoom call from his Ottawa office, saying, “We share the vision the centre would be a neutral body.”

He said the centre would make resolution tools, such as mediation and facilitation, more readily available. It would also provide resources and information to help develop the claims.

“The ultimate goal of this specific claim reform co-development process is…that (the centre) facilitates and accelerates the resolution of specific claims and instills more trust in the process. This is something First Nations have been calling for us to do for decades,” said Miller.

Neskonlith Indian Band Kukpi7 Judy Wilson, also a member of the chiefs committee on lands, territories and resources, said that after decades of wanting change, it was “paramount” that the changes be co-developed.

She also called for steps to be taken to ensure changes were upheld by subsequent governments and that First Nations continued to be engaged.

Madawaska Maliseet First Nation Chief Patricia Bernard, also on the chiefs committee, said she was cautiously optimistic although the specific claim process has never been a straight line.

“Because of our history, and specific claims is about history, we need to remain cautious,” said Bernard, speaking on Zoom from New Brunswick. “I’m just hoping that this is on an upward trajectory that continues to stay upward and that the rollercoaster doesn’t loop down.”

The AFN document also calls for the specific claims process to “recognize and respect Indigenous laws.”

Miller acknowledged the new centre would be reflective of First Nations concepts and laws, which would guide “how we behave ourselves when we have differences.”

Along with recognizing Indigenous laws, the AFN document said the resolution centre would be “free from arbitrary limits on compensation…By recognizing Indigenous laws and eliminating arbitrary limits on compensation, the (centre) will give First Nations access to a fair process of redress that fits their needs and priorities.”

Work to co-develop the mandate of the centre will now get underway.

“The exact mandate of the centre will be at the heart of our co-development work with the AFN and other First Nations partner organizations. We’re committed to following your lead and working hand-in-hand with First Nations to do this work,” said Miller.

He said that work would be consistent with the United Nations Declaration on the Rights of Indigenous Peoples.

Miller stressed, though, that his department had already begun “making efforts” to make the specific claims process more collaborative. He said his department was engaging with First Nations earlier in the process and more frequently.

He said this year was “heading toward” a record number of settlements.

He also pointed out that in following the guidance of the Truth and Reconciliation Commission’s Calls to Action on the legacy of residential schools, the government was acknowledging historical harms and issuing apologies to communities and their people if the First Nation saw that as an “important part of reconciliation.”

“The launch of this co-development process is long overdue, but it’s a good example of partnership. It’s about all parties coming to the table, working through differences and finding solutions together. It’s only the beginning but its an important step,” said Miller.

“The co-development process,” said Prosper, “can allow our future generations to have a better future.”