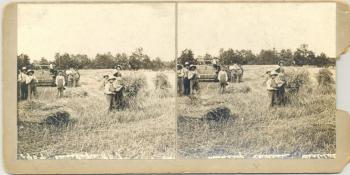 Children worked in the fields of the model farm at Mount Elgin, a residential school. They spent more time tending the animals and the crops on the farm than they did in the classroom. (United Church photo)

“As we walk this path of truth together we must acknowledge that genuine healing for our communities can only occur once the issue of unmarked burial sites has been put to rest.” — Chippewas of the Thames First Nation Chief Jacqueline French
By Colin Graf
Local Journalism Initiative Reporter
Windspeaker.com

Members of the Chippewas of the Thames First Nation near London, Ont. are starting work to find the remains of children from 21 different communities who died while attending a residential school on their territory.

The research hopes to identify as many children as possible who went to the Mount Elgin Industrial School between 1850 and 1946. The project was announced in a video prepared by First Nations officials for the National Day for Truth and Reconciliation Sept. 30.

A team from the First Nation will be using materials compiled by the Truth and Reconciliation Commission of Canada, along with about 1,400 pages of documents from the United Church and its preceding church denomination that ran the school, said Treaties, Lands, and Environment Director Kelly Riley in the video.

The researchers will be building on the “good work and hard work and sometimes sad work” of a group of school survivors who started the research “a number of years ago,” explained Riley.

Later in the fall the team will be using aerial drones to look at potential burial sites, and will be doing field walks, he adds. The second stage of the work will involve “the full gamut of modern technology,” including ground-penetrating radar that has been used at other First Nations to find possible children’s graves.

The third stage will take place if remains are discovered. It may be “premature” to talk about unmarked burials, “but it is prudent to plan for it,” according to Riley. If that occurs, the First Nation’s health and social services will have people ready to help with the impact of such a finding, he says.  All three stages of work may take from three to five years to complete, he estimates.

A range of professionals have already been consulted, including archaeologists, anthropologists, and pathologists. One of the goals is “to reach a point to put to rest some of the rumours (about the school)... and with some certainty close a chapter in the book of the Mount Elgin Residential Institute,” he explains.

Mount Elgin “was a heart-breaking destination for many Indigenous children who were forced to attend,” said Chippewas of the Thames Chief Jacqueline French.

“As we walk this path of truth together we must acknowledge that genuine healing for our communities can only occur once the issue of unmarked burial sites has been put to rest,” she told her community in the video.

“For all of us to move forward to a brighter future for coming generations we intend to answer this lingering question and to finally provide closure to our people,” she added.

A fund-raising campaign is being launched to preserve and transform the school’s horse barn, the last remaining building on the Mount Elgin site. Children living at the site spent much of their time working in the fields and barns on the church-run farm at the site.

The campaign aims to provide funds to restore the barn, establish it as a “world heritage site and a future interpretive centre where tourists can learn about Mount Elgin,” says community member Sarah Riley. Organizers also hope it will “provide a place of healing for community members.”

The barn housed thoroughbreds, which students were tasked with taking care of, Sarah Riley explains, and has “old etchings and scrawlings” made by children on wooden beams dating back to 1895.

“It is our wish to keep the barn as a reminder of our resiliency and to be used as an educational resource,” she adds.  Donations are being accepted by the Anishinaabe’aadziwin department at 519-264-2500.

Mount Elgin was built at the urging of Ojibwe leader Kahkewaquonaby (Rev. Peter Jones), according to a United Church website.  In the early 1800s, First Nations people had been removed from their lands, and Jones “had a vision of a manual labour school that would give them the skills to be part of this new and rapidly changing world,” according to Chippewas of the Thames First Nation Language & Culture Director Gina McGahey.

Jones raised money from church groups in Britain and the United States, along with the colonial government, to build the boarding school. The chiefs of the region offered a quarter of their annuities from treaty agreements as well, McGahey says.

Jones “had expected the school to train girls and boys to become political leaders, missionaries, teachers, and interpreters, not domestic servants and farm hands,” according to the church. Soon after its opening, when it became apparent that Mount Elgin would not be operated by Christian Indigenous leaders as he had envisioned, Jones refused to send his own children there, the United Church website claims.

Typically, students had around 5.5 hours of school a day along with 7.5 hours of labour, building structures, caring for the farm animals, working in the fields, tending the garden, and collecting eggs, McGahey says. The children “didn’t get to enjoy the fruits of their labour” as they were given “limited and stale food,” she said.

They had only one hour each day for play, and suffered from homesickness, lack of parenting, loneliness, bullying by older students, and abuse at the hands of school officials, McGahey detailed. There were outbreaks of tuberculosis and scarlet fever. The website of the Truth and Reconciliation Commission only lists five children who are known to have died there, however.

The school closed in 1946 as the farm income declined. Parents complained their children were malnourished and underweight, and attempts to run away were increasing, according to McGahey.

In 1943, the Council of the Chippewas of the Thames had presented five sworn statements detailing poor diet and spoiled food, lack of medical care, severe strappings and physical abuse, and inadequate winter clothing, according to the United Church.

The building was also falling apart by the time it was closed.